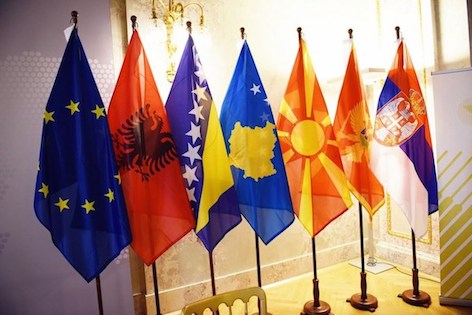 Postponement of accession negotiation process with Western Balkans states has already led to losing by EU its position in the region. Therefore, the EU-authority in Brussels is trying to enforce this process, but every time is facing new challenges.

On December 14, EU Council reaffirmed the prospects of EU membership for the Western Balkans states.

Adoption of the EU Council conclusions became the result of the efforts of Slovenia, current EU presidency nation and active lobbyist for the European integration of the Western Balkans. Also it was a success for the supporters of further enlargement of the European Union.

But this document had a difficult path of its endorsement. Previously, Germany, which chaired the EU Council last year, failed to adopt a document with a clear EU-perspective for the region.

The document was then blocked by Bulgaria. National parliament has vetoed talks with Northern Macedonia over a dispute over historical issues between Sofia and Skopje.

Therefore, the decision was adopted with a compromise. That`s why no clear date for the start of EU accession talks for Skopje and Tirana was determined.

According to the Council conclusion the rule of law will be a key element for the Western Balkans’ progress towards European integration.

But in reality, much more depends on Bulgaria’s position, which remains a major obstacle for starting EU negotiations with Northern Macedonia and Albania.

And it is unlikely that situation is going to change in the near future. New Bulgarian Prime-minister Kirill Petkov has said Government will maintain its previous policy and continue to block the talks on EU-accession with Northern Macedonia.

According to Petkov, preserving of Government position on Northern Macedonia was stated in Coalition Agreement by political parties that formed the majority after the recent snap elections in Bulgaria.

It seems unlikely that the government of Northern Macedonia will comply with all Bulgarian demands. Skopje has just passed heavy Government crisis. Therefore, no national politicians will approve unpopular with citizens decisions.

It is also unlikely that Brussels will divide Northern Macedonia and Albania in the negotiation process. The combination of two countries for EU-accession process is based on large Albanian minority in Northern Macedonia. And previous enlargement success story.

Current situation in other Western Balkan countries  does not facilitate acceleration their European integration approach. There is a taff confrontation between coalition and opposition in Montenegro coused long-term Government crisis in the country. Now it is most likely that conflict is going to cause snap elections. But it is not clear whether elections will help Montenegro.

Some breakthrough in relations with the EU was made by Belgrade. This week Serbia has opened one cluster and four chapters in EU-accession talks at the Intergovernmental Conference in Brussels.

Serbian Prime-minister Ana Brnabic said that adopted by Conference decision  was a turning point for Serbia in negotiations with EU. Aleksandar Vučić, the President of Serbia, called the news from Brussels good and wonderful.

But the main challenge on Serbian road to the EU – negotiations with Kosovo – is far from success and looks like a stalemate. Many ones in Europe also inclined to notice Belgrade’s influence on the situation in Republika Srpska. Recent activities of the RS Authorities  are bringing the situation in BiH closer to chaos than to EU.

Thereby, future of further European integration of the Western Balkans still remains uncertain. In reality, the lack of clear deadlines for EU-accession process by  Brussels are coused not only by shrinking from commitments, but also by real difficulties to clarify them in current situation on Western Balkans.