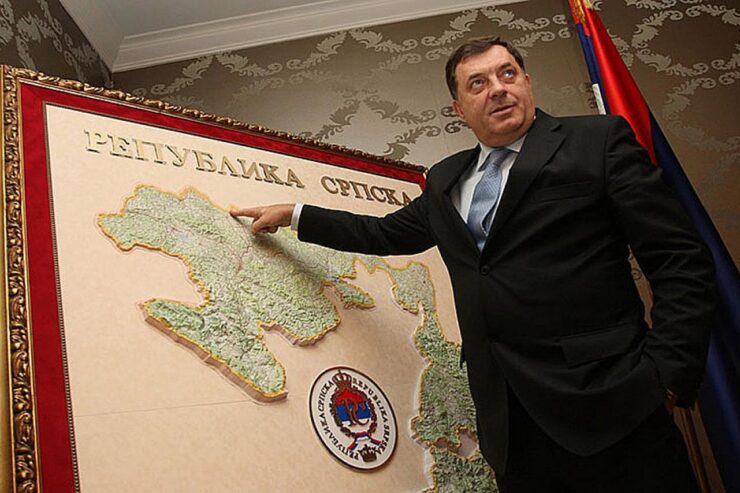 The “Holy Bible” of Dodik’s Secessionism

After 15 years of threats to disintegrate Bosnia and Herzegovina and to call a referendum on independence and a “peaceful breakup”, the Republika Srpska’s leader Milorad Dodik radicalized his policy by withdrawing the Serbian entity from the army, judiciary, and tax administration – the three pillars of common security, rule of law and economic system. He has pushed through the RS Parliament a risky decision to return “deprived competencies” from the original Dayton peace agreement and is one step closer to secession from BiH.

In Banja Luka, the capital of Republika Srpska, the National Assembly has adopted a Declaration on the transfer of competencies from BiH to the RS level, based on which the entity withdraws from the constitutional and legal order of Bosnia and Herzegovina in the field of justice, indirect taxes, security and defense. One of the options advocated by Dodik is the formation of the RS army after the dissolution of the BiH Armed Forces, which has existed since 2005 on the basis of a law passed in the BiH parliament. The deadline for implementing the decisions is six months.

Many critics say it is a coup d’état that could bring the country back to war. The opposition boycotted the vote, but before that, in a heated debate, it warned about huge dangers of such a decision. “Whoever thinks that he can uncontrollably divide the BiH army and control his border or return the judiciary under the authority of RS is grossly deceived,” said Mirko Sarovic, the president of the opposition Serbian Democratic Party. The day after the vote, the leader of RS announced that the entity would withdraw all money from the joint state budget (about 130 million Euros a year), which is an additional blow to BiH’s sovereignty and an incentive for secessionists who want to own all property on their territory.

The representatives of the RS government and opposition have blocked the work of state institutions at the BiH level since July, after former High Representative Valentin Inzko imposed amendments to the BiH Criminal Code banning denials of the 1995 Srebrenica genocide. The blockade led to the situation in which BiH could not adopt the budget and has to use the temporary financing. The new Declaration specifies that “all laws imposed by the High Representative are unconstitutional.”

Dodik called the decision of taking over four key functions of the state a “Holy Bible”, but immediately faced an avalanche of critics from both the opposition in RS that boycotted the session, and officials in Sarajevo who accused him of openly violating the Dayton Peace Accords and bringing Bosnia back in time of wars.

The Croat representative in the three-member BiH presidency, Zeljko Komsic, called on the state prosecutor’s office to urgently launch criminal proceedings against Dodik, who “initiated and devised” the RS National Assembly’s conclusions, as well as against the members of the RS Parliament who voted on the plans to separate entity from the constitutional and legal order of BiH.

Bakir Izetbegovic, a Bosniak member of the BiH presidency, believes that this is a direct blow to Dayton and the constitutional and legal order of the country. “BiH judicial institutions are obliged to react decisively and take urgent steps within their competence. High Representative Christian Schmidt has the same obligation, as the guarantor countries of the Dayton Peace Agreement. There must be no delay or waiting for six months,” he said.

“Yielding to Dodik’s threats and flirting with the ambitions of Dragan Covic (the president of the Croatian Democratic Union who advocates that Croats get their own entity) have brought Bosnia and Herzegovina to the state it is in today,” Sarajevo’s Oslobodjenje writes in a comment.

The degree of seriousness of the situation caused by the decision of the RS Assembly is confirmed by the meeting of the chairman of the Presidency of BiH, Zeljko Komsic, with the representatives of the Association of Generals of BiH. Generals gave the unreserved support to the state bodies of BiH in the defense of territorial and political integrity and made them available to state institutions, primarily the Presidency of BiH. They said that they know how to fight for the only homeland of BiH.

The decisions from Banja Luka will undoubtedly have a negative effect on talks between representatives of political parties in BiH, the US and EU delegations led by US Special Envoy for Electoral Reform Matthew Palmer and Director of the European External Action Service (EEAS) Angelina Eichhorst.

The secession of RS would be a step closer to the controversial idea of ​​the Serbian world, which was launched in Belgrade by Interior Minister Aleksandar Vulin, and completely fits into Dodik’s plans to unite “two Serbian states”. The President of Serbia, Aleksandar Vucic, distanced himself from Vulin’s scenario, but never decisively, despite warnings that the Serbian world could have a catastrophic effect on peace in the region. Official Belgrade did not react to the decision of the Assembly in Banja Luka, but opposition politicians demand that Serbia clearly condemn Dodik’s actions.

“The war in Bosnia and Herzegovina 1992-95 took more than 100,000 lives, over a million people were displaced and the economy was destroyed. Any play with peace and provoking potential conflicts must be prevented”, the League of Social Democrats of Vojvodina points out and reminds the Serbian authorities that Serbia is one of the signatories of the Dayton Agreement.

German Foreign Minister Annalena Baerbock called on the European Union to impose sanctions against Dodik, but the RS leader, who is already on the State Department’s blacklist, is not worried and announces countermeasures if punitive measures are taken. At the end of September, the former ‘darling’ of the West and now the most loyal ally of Vladimir Putin in the region, told the special envoy of the American president for the Western Balkans, Gabriel Escobar, literally the following: “F**ck the sanctions!”

“If Germany imposes sanctions, we will retaliate. I am not blind and know what America and Germany are. But my message is – you overreacted. You did everything to hate BiH, and we never loved it”, said Dodik, assuring the citizens that RS will not lose Western investors. In his arrogant style, he did not miss the opportunity to insult Bosnian Muslims: “Bosniaks have learned to be ruled by someone, and Serbs do not tolerate tutors.”

Apart from the open support of Moscow and official Belgrade which acts as if nothing is happening, Dodik can thank the international community for his nationalist and secessionist projects.

The West has finally identified Dodik as the biggest threat to Bosnia’s survival at a time when the country is facing its most serious crisis since the end of the 1995 war, but the Quinta for BiH –  US, Britain, France, Italy and Germany – has been boosted by the EU special envoy to Bosnia, but all six proved to do nothing as a representative of the Office of the High Commissioner (OHR) was prevented from attending a session of the Assembly in Banja Luka.

Western diplomats acknowledge Dodik’s escalation, but limit themselves to talks about “unacceptable actions” and useless appeals to the RS ruling coalition, which they expect to be “concerned” as “challenging the Dayton framework harms the entity’s economic prospects, threatens the country’s and region’s stability and endangers BH’s future in the EU”.

The very same phrases that various envoys tell over the years are repeated again: return to dialogue, forget the rhetoric of the 1990s, build mutual trust and find a solution. The withdrawal of RS from the constitutional and legal order of the country requires much stronger condemnation. Bosnia is largely a dysfunctional state, because it has been listening to such messages for almost three decades.

However, the first reactions from Europe are coming. “Ethnonationalist and secessionist policies, which are currently trying to destabilize BiH, should be opposed as soon as possible”, said the chairman of the European Parliament Delegation for Cooperation with BiH and Kosovo, Romeo Franz, and co-chair of the European Green Party Thomas Waitz.

At the beginning of December, the European Green Party adopted a resolution at the session of the party’s Council which states that the EU “strongly opposes any changes in borders, especially on the basis of ethnic divisions. The EU stands behind the Dayton Accords and will fully support the further development of Bosnia and Herzegovina as a multiethnic, multi-religious and civic state.”

The West has been assuring for months that there will be no war, but does not say how to prevent it. However, it’s still unlikely despite Dodik’s dangerous games.