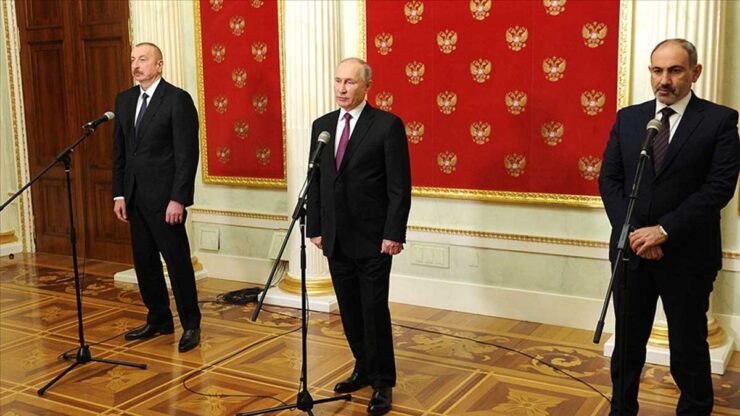 The 2020 Karabakh war has significantly shifted the geopolitics of the South Caucasus: The experts and pundits still argue about the primary beneficiary of the war. Was it Russia, which put its boots on the ground, Turkey, which was the first country, which directly intervened militarily in the post-soviet space after the collapse of the Soviet Union, or was it Azerbaijan, which achieved significant territorial gains? While debates are underway about the war, the post-war dynamics in Armenia – Azerbaijan relations and in Nagorno Karabakh put forward more questions than answers. What will be the mid and especially the long-term future of Nagorno Karabakh? Will we face the gradual normalization of relations between Armenia and Azerbaijan and Armenia and Turkey with the restoration of communications, and at the end of the day, which power will play a dominant role in the South Caucasus as a result of all these transformations. The complex nature of the South Caucasus geopolitics and the overlapping and contradicting interests of the leading external players make elaborating predictions quite challenging. However, it is necessary to develop at least short-term preliminary assessments on what lays ahead in Nagorno Karabakh and Armenia – Azerbaijan relations.

More than 13 months after the end of the 2020 Karabakh, the keyword in describing the future of Nagorno Karabakh is ambiguity. Russian troops provide a minimum level of security for Armenians living there; however, the recent incidents that resulted in the killings of three Armenian civilians have sent a clear signal that Russians cannot prevent such cases. Azerbaijan has a clear-cut strategy regarding the Nagorno Karabakh – war has solved the conflict, there can be no return to the discussions about any status for Nagorno Karabakh. Azerbaijan rejects the mere existence of Nagorno Karabakh. Instead, it uses the term Karabakh economic region. Azerbaijan’s perspective is apparent – to start to settle Azerbaijani population in the territories of the former Nagorno Karabakh Autonomous oblast currently controlled by Azerbaijan, to keep tensions along the new line of contacts to force/convince at least some Armenians to leave, and wait for the withdrawal of Russian peacekeepers to establish control over the remaining territories of Nagorno Karabakh. The time frame for the Russian troops’ withdrawal from Karabakh is unknown; however, according to Azerbaijani logic, it will happen sooner or later.

The strategy of Armenia is less clear. Yerevan argues that the war has not solved the conflict and that the OSCE Minsk Group should resume the negotiation process based on the Madrid principles and basic elements elaborated back in 2007 or on their updated versions. However, Armenia has not provided an answer to a straightforward question – what Yerevan is going to do if Azerbaijan continues to reject the existence of Nagorno Karabakh and refutes any negotiations on Karabakh status. If the history of the past thirteen months tells anything, the Armenian government will probably do nothing except making standard and boring statements, which will change nothing. Suppose everything remains the same as it was after November 2020. In that case, we will see a gradual decline of the Armenian population in Karabakh with the simultaneous rise of the number of Azerbaijanis, which within a decade may make the Nagorno Karabakh within 1988 Autonomous oblast borders a territory with an Azerbaijani majority. As of 2022, Armenia will continue to transfer zero-interest loans to Nagorno Karabakh to pay salaries, pensions, cover the cost of utilities, and fund some construction work while having no involvement in the security-related issues. Azerbaijan, in mid – 2022, will start the process of relocation of Azerbaijanis into the territories of former Nagorno Karabakh Autonomous Oblast, while Russian peacekeepers will continue to foment their presence there.

2021 has witnessed ups and downs in this triangle. The year started with January 11, 2021, trilateral statement to start the restoration of communications. Since May 2021, Azerbaijan has launched its military blackmail strategy invading up to 50 square km of Armenian territories, which are still under Azerbaijani control. On November 26, 2021, Russian, Armenian and Azerbaijani leaders adopted another trilateral statement confirming their readiness to restore the communications and start the delimitation and demarcation process, albeit without providing any timeframe. Prime Minister Pashinyan and President Aliyev had two meetings in Brussels mediated by the President of the European Council, Charles Michel, and President Macron. The leaders once more confirmed their readiness to restore rail links between Armenia and Azerbaijan, presumably connecting Azerbaijan with the Nakhijevan Autonomous Republic via Armenia and Armenia with Iran and Russia via Nakhijevan and Azerbaijan proper. The EU does not want to see new clashes between Armenia and Azerbaijan and is ready to provide financial and other assistance to launch Armenia – Azerbaijan economic relations, hoping that economic benefits will decrease tensions and make any new war less likely. IN this context, EU and Russia interests overlap as Kremlin is also interested in restoring the region’s stability. Not surprisingly, before Brussels meetings, Charles Michel and Macron discussed this issue with President Putin seeking to synchronize watches. A breakthrough happened in Armenia – Turkey relations at the end of December as sides agreed to appoint special representatives to push forward the normalization process. EU, Russia, and the US welcomed these developments, and Turkey assured Azerbaijan that Baku would be fully informed about any details. However, Armenia and Azerbaijan continue to interpret their joint statements differently. Azerbaijan argues that the November 10, 2020 statement requires Armenia to allow Azerbaijani access to Nakhiejavn via the Syunik province without border and customs control or to agree to the establishment of Azerbaijani checkpoints along the Lachin corridor, which connect Armenia with Nagorno Karabakh. Armenia rejects these claims and argues that the restoration of communications between Armenia and Azerbaijan has nothing to do with the Lachin corridor. This debate will also continue in 2022 in parallel with construction works to restore the railway. Azerbaijan will continue to put military pressure on Armenia to accept its interpretation of the statements through escalations along different sections of Armenia – Azerbaijan border, but large-scale hostilities are unlikely. Armenia and Turkey may decide to establish diplomatic relations and open embassies in 2022, while the opening of the Armenia – Turkey border will depend on the developments in Armenia – Azerbaijan debate over the legal status of the Azerbaijan – Syunik – Nakhijevan, and Armenia – Nakhijevan – Iran railways. 2022 will not bring the breakthrough in the status quo formed after the 2020 Karabakh war. However, it may create conditions for some significant changes in the communication sphere in late 2023, when the restoration of the Azerbaijan – Armenia – Nakhijevan railway may be finished, and sides should adopt final decisions regarding the legal status of the route.