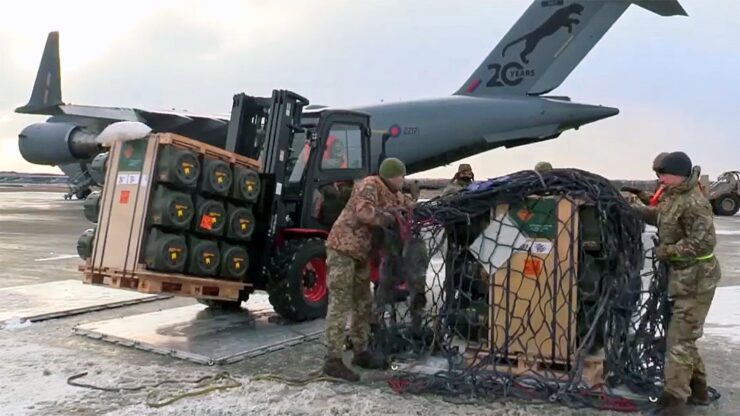 Under export control regulations, countries must obtain approval from the State Department before transferring any weapons they received from the United States to third parties.

According to Reuters, The third-party transfer agreements will allow Estonia to transfer Javelin anti-tank missiles to Ukraine, while Lithuania will be permitted to send Stinger missiles.

The idea that Ukraine can count on military assistance from the Baltic countries was expressed by their defense ministers at the end of last year. “Aid is very different – both military and non-military. (…) But it is a fact that the assistance will be provided,” Lithuanian Defense Minister Arvydas Anusauskas said at the time.

At the beginning of last week, another important event took place: the UK provided Ukraine with modern anti-tank weapons. As of the morning of January 19, six C-17A aircraft carrying NLAW high-precision anti-tank systems have been sent to Boryspil from the Brize Norton airbase in two days. The Main Battle Tank and Light Anti-tank Weapon (MBT LAW), also known as the NLAW, is a joint British and Swedish short-range fire-and-forget anti-tank missile system. This is one of the world’s best disposable anti-tank grenade launchers with a grenade caliber of 150 mm and is an ideal weapon for fighting in the city and destroying all types of armored vehicles.

It is not officially reported how many of these weapons were transferred to Ukraine, however, from the statement of the British Secretary of State for Defence Ben Wallace, it can be concluded that more than 2,000 were transferred. “I will keep the question of sending more defensive weapons to Ukraine under close review. I do not rule anything out within helping Ukraine deliver self-defence,” he said, and added that Britain could add more to the 2,000 anti-tank missile launchers sent last week.

On January 12, in a telephone conversation with Ukrainian Foreign Minister Dmytro Kuleba US Secretary of State Antony Blinken noted an increase in military assistance to Ukraine in case of an escalation of the conflict by Russia. “If Russia chooses the path of further conflict, the United States and our Allies and partners are prepared to impose enormous costs on Russia’s economy, to reinforce NATO’s presence in frontline Allied states, and to increase defensive assistance to Ukraine,” the American diplomat said.

And during his visit to Kyiv on January 19, US Secretary of State confirmed his words and added that the United States intends to continue military assistance to Ukraine in the coming weeks. “As you know, we have been providing defensive assistance to Ukraine consistently, including deliveries that – taken place in just the last few weeks alone. …The deliveries are ongoing, again, as recently as the last few weeks, and more are scheduled in the coming weeks,” Blinken said.

The above examples of military assistance are important both for Ukraine itself and for its Western partners. Moreover, both from a military and political point of view. For Ukraine, this is an opportunity to qualitatively strengthen its defense capability and demonstrate to Russia its readiness for defense. It also indicates that in case of a large-scale aggression by Russia, Ukraine will not be left alone and will have the support of its partners.

The West, by continuing to support Ukraine by military and non-military means, is thus responding to Russia’s recent ultimatums regarding Ukraine and NATO. Instead of making concessions to Russia, the US and its European partners are arming Ukraine, constantly hold consultations and promise Russia “painful” sanctions in case of an invasion.

These “painful” sanctions were also mentioned by Joe Biden during his press conference dedicated to the 1st anniversary of his tenure as president of the United States, which took place on January 19. “We are in a position where there may be serious economic consequences in the future (for Russia – ed.). For example, everything that is connected with the dollar: if they send troops, they will pay. Their banks will not be able to deal with dollars,” the American president said. The inability of the Russian financial system to use the dollar will become a serious problem for local banks and will lead to extremely negative consequences, both for the Russian economy and for every Russian.

With such actions, the West, in fact, uses against Russia the Russian tactics, namely: is raising the stakes. By rejecting Russian ultimatums, demonstrating a readiness for a tough response in case of a Russian invasion of Ukraine, and providing it with diplomatic and military support, the West is thus forcing the Russian leadership to think carefully about how beneficial will be its military intervention against Ukraine, first of all, for him personally, as well as for Russia as a whole.