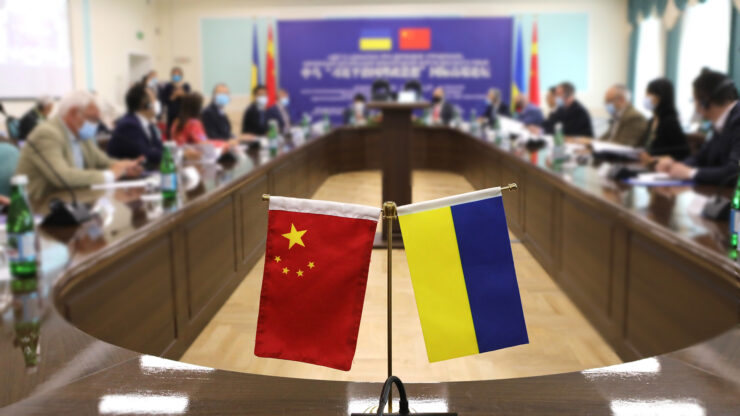 Head of the Asia-Pacific section of the New Geopolitics Research Network Yurii Poita on the achievements and problems of Ukrainian-Chinese cooperation, as well as the prospects for 2022:

Probably, Ukraine is trying to build a model of relations close to most EU countries. It suggests that China is not a threat, but cooperation with it can bring risks, both internal and external.

In this regard, the Ukrainian government during 2021 tried to outline the range of areas allowed for cooperation: trade, investment in insensitive areas, medicine, tourism, education and science. And also to identify industries in which cooperation with China is inappropriate: the transfer of military technologies that can change the balance of power in favor of China and pose a threat to the US and allies in the Asia-Pacific region; construction of 5G networks with the Chinese company Huawei; cooperation in cybersecurity; access to critical infrastructure elements.

China, in turn, stepped up its efforts towards Ukraine: in addition to increasing Ukrainian exports to China, it strengthened cooperation in the scientific community, increased its information presence in the Ukrainian media, and offered loans for the construction of Ukrainian infrastructure. Probably, this is done with the aim of deepening Ukraine’s dependence on China and can be used as a lever of pressure in the context of strategic competition with the United States.

In 2021, Ukrainian exports to China increased significantly, an agreement was signed on investments in infrastructure, and a Chinese-Ukrainian alliance of universities was created.

However, so far Ukraine has not been able to achieve from China the goals it has been declaring for decades, neither in the economy, nor in technology, nor in security. China does not create production facilities in Ukraine, and is not going to use Ukraine as a “production bridge between East and West.” Ukrainian exports to China remain predominantly raw materials, and there are no trends in its change.

China has not become an assistant to Ukraine in countering Russian aggression; votes against Ukrainian resolutions at the UN; did not participate in any of the formats in the Crimean Platform; strengthens partnership with Russia, and in some issues supports its anti-Ukrainian initiatives; continues to try to get hold of Ukrainian military technology (both through the acquisition of enterprises and through the activities of Chinese intelligence services through the Ukrainian-Chinese cooperation centers).

This probably indicates that cooperation between Ukraine and China will be significantly limited: China can increase the purchase of raw materials and agricultural products, offer loans for infrastructure construction. While the probability of a qualitative change in the structure of trade with China, the creation of Chinese production facilities in Ukraine, and the strengthening of security with the help of China remains extremely low.

However, even an increase in the share of China in Ukrainian exports and financing of Ukrainian projects, together with the above-mentioned actions of the PRC, will significantly increase China’s influence on Ukraine.

Trends and prospects for 2022

The first and main factor is the intensification of the strategic competition between the US and China, in which more and more areas are “securetized” and can be used as an instrument of severe pressure from each of the parties. For example, the US list of sensitive areas includes not only military and dual-use technologies, but also previously harmless “civilian” industries: IT, science, education.

China, realizing this: a) is trying to reduce dependence on the US for a number of goods and technologies; b) increase the dependence of other countries on their market, financing and technology. Under these conditions, it becomes more difficult for Kiev to separate politics from the economy, which creates additional risks for Ukraine.

The second factor is China’s willingness to apply sanctions to countries whose actions are considered by Beijing as unfriendly. Under these conditions, Beijing resorts not only to using the direct dependence of countries on its market, technology, supplies, finance, vaccines, but also expands its influence with the help of other players. For example, in the case of Australia, China, in response to Canberra’s statement about the need to conduct an independent investigation into the causes of Covid-19, banned the export of a number of goods to its market and tried to reduce the number of students studying in Australian universities.

However, in the case of Lithuania, in response to the intensification of relations between Vilnius and Taiwan, China began to use broader instruments. Due to the fact that China’s share of Lithuania’s exports is small, and it is difficult to harm by restricting access to its market, China began to act according to the network principle, trying to put pressure on foreign companies that are highly dependent on the Chinese market, forcing them to refuse cooperation with Lithuania, until Lithuania “returns to constructive relations with China.

This suggests that China can put pressure on Ukraine not only through dependence on its market and supplies, but also by attracting other countries to this, using their dependence on China.

The third factor is the strengthening of partnership between Russia and China. Despite the fact that now there is no talk of creating a military-political alliance between the countries, and this scenario is unlikely, each of the countries understands the importance of maintaining friendly and stable relations in the face of confrontation with the United States. Under such conditions, China will not take steps that will irritate Moscow, incl. in the Ukrainian direction, and will periodically join the anti-Western rhetoric of Moscow, incl. regarding Ukraine.

For example, Chinese officials have repeatedly condemned US sanctions against the Russian Federation, supported the construction of Nord Stream 2, spread a fake about 20 US biolabs in Ukraine, condemned “NATO expansion to the East”; justified the accumulation of Russian troops near the territory of Ukraine. It is difficult to say about the effectiveness of such statements, however, such rhetoric from Chinese officials and the media reinforces narratives that are contrary to the interests and security of Ukraine.

China’s unwillingness to prematurely resort to aggressive actions may be a positive factor: Ukraine is still considered by China as a friendly country, an important supplier of agricultural products and some military technologies.

Therefore, Beijing will strive to maintain a friendly and positive background in relations. This enables Ukraine to strengthen its self-sufficiency in the economy and security, while maintaining friendly relations with China, but at the same time: a) take consistent actions to reduce the risks of cooperation with China; b) reduce dependence on China in a number of industries.