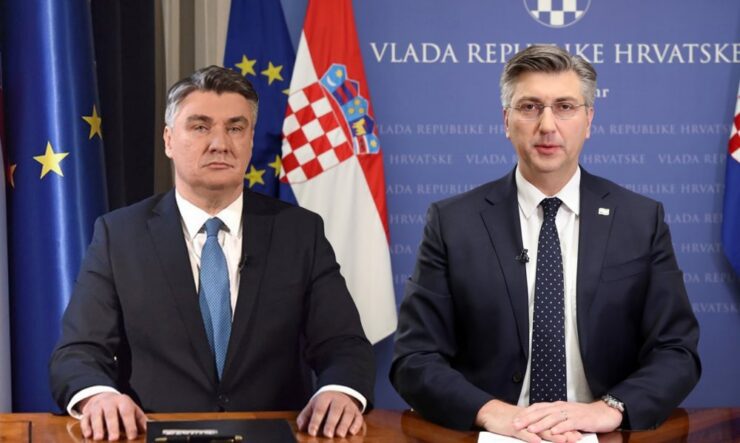 Military tensions on Ukrainian borders and position of The Western Balkans

In recent weeks military tensions on Ukraine’s borders have increased dramatically. Russia, after its unacceptable claims to the West, is increasing its troops systematically. But this time the threat exists not only on the entire Russian-Ukrainian border and from the territory of occupied Crimea.

The territory of Belarus, the northern neighbor of Ukraine, may also become a new front. Belarusian dictator Lukashenko is entirely dependent on Kremlin support. Now he is facilitating the redeployment of Russian troops to Belarus under the legend of joint exercises.

Ukraine is preparing for any scenario and looking for political and diplomatic support from the West. Arms supplies, mostly from the United States and Britain, have also been unprecedented in recent weeks.

Therefore, Ukrainian diplomats and Ukrainian society are closely observing the position of the United States, NATO and the European Union, which are in constant consultation and negotiation. Ukraine is also interested in the position of other countries, first of all European ones, because their position about Russian aggression can influence the common position of the West.

Among the Balkan countries, only Northern Macedonia and semi-recognized Kosovo have stated their strong support for Ukraine. Skopje has a unique history of relations with Ukraine, and its position has to be commended.

Most countries of the region haven`t expressed their official positions. And we can understand why. In BiH traditionally it is simply impossible to form any common position, especially now.

Serbia is a traditional ally of the Kremlin on the Balkans, and we should not expect from Belgrade to criticize its partner. Montenegro, a member of NATO, is currently in a deep internal political crisis.

Recent statements of Croatian President Zoran Milanovic, who began accusing Ukraine of corruption, coup, EU unnecessary, and ets, have become very unpleasant for Ukraine. He even said that the Croatian military would leave all NATO allied forces in case of Russian aggression against Ukraine.

A Croatian military contingent of 250 troops was stationed in Poland as part of the NATO Advanced Based Forces. But a week ago they returned to Croatia.

Moreover, such statements by the President of the EU and NATO member country in the current tense of the security situation in Europe also undermine the unity of allies and their common position.

Milanovic’s statements were heard in the Kremlin very well. And they were absolutely happy about it. For example, the Russian Foreign Ministry reacted immediately, explaining it as a presence of alternative positions in EU and NATO.

But the most unfortunate thing is that President Milanovic’s statements are based on internal political rivalry. Milanovic and Prime Minister Plenkovic are political opponents of opposing political parties. Andrej Plenković is a member of the center-right Croatian Democratic Union (CDU), and Zoran Milanović is a representative and former leader of the center-left Social Democratic Party (SDP).

Some time ago, Milanovic actively criticized Plenkovic after his visit to Ukraine several months ago. At the time, the Croatian president also said that Ukraine should not be supported by the Croatian Government.

Also in his criticism of the Government, Milanovic likes to use military themes. Formally he is the Commander-in-chief of the Croatian Armed Forces, although in other areas his influence on the Government is limited.

Therefore, in addition to Prime Minister Plenković, the main object of his constant criticism are the activities of Defense Minister Mario Banožić. All important military contracts of the Croatian Ministry of Defense become a subject to conflict between Milanovic with Plenkovic and Banozic. This includes the purchase of french fighters Rafal for more than 1 billion euros, plans to supply american AIFV Bradley, american helicopters Black Hawk and many other issues.

As for Milanovic’s latest statements, Prime Minister Plenković made a statement and apologized for his president’s words. Plenkovic is posed as a friend of Ukraine, so Milanovic opposes and criticizes his position.

Therefore, it is possible to say that Croatia remains a friend of Ukraine, and Kyiv can figure on the political and diplomatic support of Zagreb.