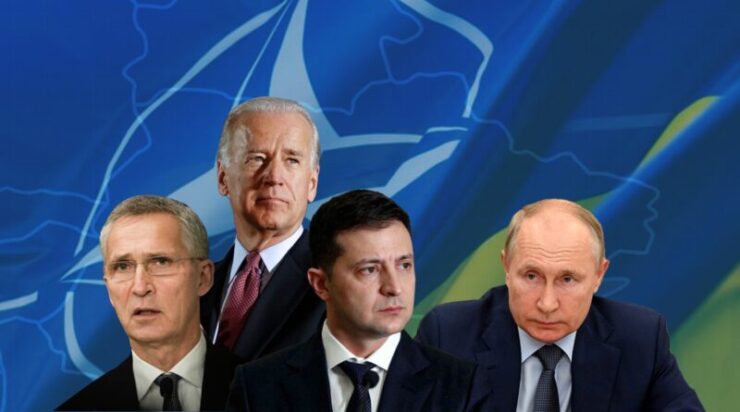 Why Vladimir Putin is more or less certain to resort to force and try to bite off yet another part of Ukraine – soon.

They say timing is everything. Well, here’s an interesting example. Matthew Bryza, former US ambassador to Azerbaidjan, points out an intriguing parallel between Russia’s incursions into Georgia in 2008 and Ukraine in 2014. The link is the Olympic Games. The Georgian war started on the very same day as the Beijing Summer Olympics, August 8, 2008; while the annexation of Crimea began four days before the end of the Winter Olympics in the Russian city of Sochi, whose closing ceremony was held on February 23, 2014.

And now here we are less than a fortnight away from the opening of another such event – the 2022 Winter Olympics to be held (for the sake of variety) in Beijing. Ominous, perhaps?

Well, maybe Mr Putin was just joining the spirit of intense international competition and saw war as an Olympic sport, to be won at any cost. Or maybe he calculated that timing the invasions to coincide with the Games was a way of avoiding excessive media attention. Or maybe he just didn’t care. Certainly, he wasn’t very considerate of the Chinese hosts’ interests in 2008. Indeed, he apparently wasn’t even worried about spoiling his own (stupendously expensive) Olympic party in 2014.

True, Mr Putin is great pals with Chinese leader Xi Jinping nowadays. True also, Mr Xi, faced with flagging economic growth and a key party congress later this year, could certainly do with a successful and smooth Olympics, and has almost certainly made this clear to Mr Putin. But there’s no guarantee that the Russian president will respect his Chinese counterpart’s feelings and refrain from stealing the show. If history is any guide, refraining from things isn’t Mr Putin’s forte.

If Mr Putin wants to go into Ukraine, one thing he certainly has going for him is that he is in a bizarrely sweet situation in two respects.

First, it seems that he can get his enemies to pay for the blitzkrieg he is contemplating. The only reason he can afford even to think of such a step is that he has been accumulating record proceeds from gas and oil sales – largely to Europe. These are enough to finance almost endless drills and even a possible limited intervention. Which suggests that those who seek to contain Mr Putin ought to be more coherent and clear-headed about it: containing him without also containing his revenues from oil and gas sales just doesn’t work, and it’s preposterous to think that it might.

Second, Europe is suffering from a sort of geopolitical Stockholm syndrome. Having filled Mr Putin’s coffers by buying lots of gas at high prices, it seems unable to avoid buying lots more – while thanking him profusely for the privilege and certainly not stopping him from doing anything he wants to. Reason: it’s mid-winter and Europe’s gas storage facilities are almost depleted. Which, incidentally, may be one reason not to wait until the Beijing Games are over. It won’t be mid-winter forever.

However that may be, Austrian Foreign Minister Alexander Schallenberg made it crystal clear last weekend that Russian natural gas supplies should not be subject to EU sanctions, regardless of unfolding events in Ukraine, including a war. This statement comes against the background of a record low level of stored gas in what was supposed to be a regional gas hub – Austria’s Baumgarten.

According to specialist oil and gas data site CelsiusEnergy (https://www.celsiusenergy.net/), Austria has the lowest level of gas in storage of all EU countries, at less than 24 % of capacity, which makes it exceptionally vulnerable to cuts in gas supplies. So now the Austrian government is, in effect, telling Russia it is free to enter Ukraine. Vienna will look the other way.

Which is precisely the point that has been made repeatedly (by Analyses and Alternatives among many others). And consistently ignored not only in Austria but also in Germany. Namely, that their level of gas supply dependency on Russia virtually precludes independence in foreign policy.

Of Putin, plans, pincers – and provisos

Meanwhile, Mr Putin is experiencing no such constrictions. On the contrary, he’s testing the limits of his “pincer strategy” and may well assume that he has not come up against any yet. Briefly, that strategy is the following. He wants to bypass Ukraine via his ‘pincers’ – twin pipeline systems, Nord Stream in the north and Turk Stream in the south – thus winning Russia a free hand to deal with Kyiv bilaterally, while keeping gas-hungry Europe indifferent by keeping it supplied (if it behaves itself).

To this end, Russia is endeavouring to supply its main allies in Europe with sufficient quantities of war-time gas. Since the beginning of the year, Gazprom has already increased gas supply levels via Turk Stream – at the Malkoclar-Strandja entry point – from 27 to 42 mcm/day, which is close to that entry point’s full capacity.

The first part of the plan is already in place. Gas storage facilities are depleted. If war breaks out, Mr Putin, the actual CEO of Gazprom, might – instead of cutting supplies – pump up gas volumes to record levels to his friends in the EU, above all Germany and Austria, making up for the shortages and portraying himself as the Saviour of Europe

However, cuts are equally likely. Even supposing he is willing to play Mr Credible, the Russian president might well find he has miscalculated, at least on two key points.

First, he may have overestimated Gazprom’s ability to send additional quantities to cover deficits and meet peak demand in the coldest days of winter, those most likely to suffer if he fails being his closest allies in Europe – Germany and Austria. There’s more than one “if” involved here. Gazprom may prove unable to produce the record amounts of gas required. But also, Mr Putin’s two ‘pincers’ – Nord Stream-1 and Turk Stream – may prove unable to deliver those amounts. If it is only a question of replenishing gas stock in depleted EU gas storage and in covering peak demand the need could be in the range of 20-25 bcm, but if war leads to Mr Putin triggering his ‘nuclear’ option – supply cuts – the missing volumes could be several times greater.

Second, there is long-term reputational damage to consider. Once a war shatters Gazrpom’s credibility and exposes it as a geopolitical weapon, retaliation and finding replacement suppliers will top the agenda of every EU and NATO member state. Nord Stream-2 will be dead, and LNG will take centre stage. And this will be so, despite Russian contingency plans to increase supplies.

Such plans apparently do exist: Gazexport has been engaging proxies across Europe to offer emergency and additional gas supplies in recent months, trying to avert loss of both reputation and market share.

EU: silence of the lambs

Meanwhile, the EU’s leaders are doing a passable – and, of course, well-practised – impression of lambs going to the slaughter. The EU has done pathetically little to address the potential gas shortage in its member states should Russia decide to invade Ukraine and blackmail them into subservience. The European Commission (EC) was extremely slow to sound the alarm on the low levels of gas in storage, instead preferring to concentrate on inflicting climate change-related shocks on long-suffering European consumers. German and Austrian flirtations with the Kremlin and extreme climate policies have hijacked the EU agenda, pushing vulnerabilities beyond previously imaginable levels.

And – while the US is busy negotiating (with mixed and modest success) a global “Gas for Democracy” action on behalf of its NATO allies – what is the EC doing? It’s keeping aloof and offering nonsensical ideas of joint purchases of Russian gas and insisting that gas supplies should continue in the event of an attack on Ukraine!

And, incidentally, they should not expect Berlin or Vienna to be at all helpful. Indeed, they should expect nothing from them but sabotage – if only because LNG is not an option for Germany and Austria. Why? Simply because the German authorities have been so obsessive – so wedded to forcing their unholy combination of Energiewende and complete reliance on Russia on the entire EU – that they have consistently opposed LNG terminals along the German coast.

But it’s not just the EU that is having to reckon with a legacy of misguided decisions and unrealistic assumptions. The binary world of Russian foreign policy has made Mr Putin the hostage of his own hybrid wars. A military incursion into Ukraine and a major confrontation with the West now seems almost unavoidable and imminent, as the West is unlikely to accept his strident ultimatums and to offer him an obvious geopolitical way out.

The Russian President might well order an attack on Ukraine simply to live up to his “macho guy” reputation and to avoid perceptions of weakness – fear of which has haunted him from his very first days in power.

Russia’s revanchism recalls Hitler’s dissatisfaction with the Treaty of Versailles and should trigger a resolute reaction. Europe must nip revanchism in the bud. Revanchism is a virus and must be prevented from spreading across the continent, reigniting old rivalries and feuds. It is hardly an accident that Germany, Austria and Hungary seem most sympathetic to Russia’s Stalinist attempts to destabilise NATO and the EU as the twin pillars of Europe’s security and development architecture.

Putin is not concerned that the West will attack him on his home turf. But his sober self-assessment is that his rule is likely to start crumbling soon under the weight of its own flaws. That fear is articulated in the notion of “export of chaos” explored by Putin confidant Vladislav Surkov – the subject of a recent article in this blog. A war, in one form or another, may seem to Mr Putin the Kremlin’s only way out of the impasse between Ukraine and the West, on the one hand, and Russia on the other. Given Putin’s mindset, he sees military adventures to preempt implosion in Russia by “exporting domestic chaos”. He may also see it as a way to make economic gains despite an economy that, by itself, won’t deliver. The return to imperialism allows the Kremlin to claim other nations’ money in what is little more than a classic criminal protection racket.

On security guarantees to Russia

At the turn of the century, there was a time when Putin considered joining NATO as a way of avoiding opposing it. I have to admit that at the time this seemed logical and reasonable for at least one major reason – if you do not keep Russia close and happy, the time would come when, feeling excluded, it will become a threat to European security and prosperity.

However, this track seemed then and now irrelevant, unless Russian revanchism and imperialism in checked and contained, as simply – logically – it is incompatible with peaceful coexistence, let alone partnership. To expect that the Kremlin under Mr Putin will be less aggressive abroad and less repressive at home is to suppose that Russia’s rulers will consent to give up the glue that bonds their country together in its present boundaries.

That wasn’t going to happen then and it’s very unlikely to happen any time soon.

So, the conflict can’t be avoided now. But it can still be contained and used to address change in Russia. The main instruments for containing Vladimir Putin are a decisive military response, escalating punitive sanctions and a positive agenda, conditional on a change in Russia’s behavioural pattern.

A glimpse of the sort of diplomatic toughness that is needed can be traced in the words of Michael Carpenter, the US ambassador to the OSCE: “If the Russians walk away from these talks, it will be clear, they were never serious about diplomacy. If they are interested in these topics…then they are going to find that we are ready to engage”. He added: “But we are not going to renegotiate core principles…those are sacrosanct”.

There were times when the need for NATO’s continued existence was a major topic. No more.