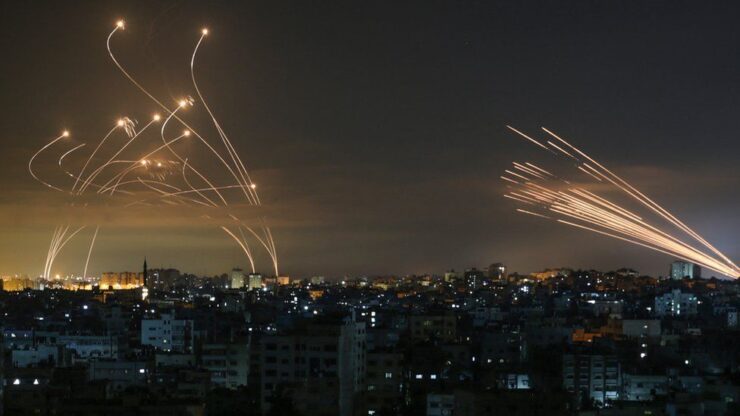 But the famed Iron Dome – an air defense system protecting Israel against missile strikes – would not be enough to protect Ukraine’s strategic infrastructure, such as nuclear power plants, from Russia, said Defense Minister Oleksii Reznikov.

NV: Could the Iron Dome meet Ukraine’s air defense needs, and would Israel be open to sharing the technology with Kyiv?

Samus: It seems that the Iron Dome is the only air defense system known in Ukraine, so everyone’s talking about it. The thing is, it won’t suit Ukraine, or at best it would cover only some very specific needs of ours.

The Iron Dome is designed to intercept missiles with ranges below 80 kilometers. So it could be used only as far as 80 kilometers away from Russia, Belarus or Crimea. Mariupol could use an Iron Dome – the system would protect the city from the kind of missiles strikes Russia made in 2015.

Against longer-range missiles (for example, Russian Iskanders can strike at targets 500 kilometers away) the Iron Dome would be ineffective.

Israel is facing a threat of completely different nature from Russia, which possesses Iskanders, Calibers, and other missile weapon systems with ranges of 500-1,000 kilometers.

NV: What kind of systems Ukraine does need, then?

Samus: Ukraine needs much more powerful, multi-layered air defense systems. One system would not protect us. The solution is to install a complex of systems designed specifically for our needs, with the expertise of the United States, Israel, some other countries, and our own engineers.

(Air defense) has to include systems dealing with short-, medium- and long-range missiles, since Russia has all three kinds in its arsenal.

Israeli air defense is actually designed in cooperation with US. The United States shared various technologies with its ally; Washington also provided funding for them. I think a similar approach could work in Ukraine.

NV: What kind of support we could expect from our western allies when it comes to air defense?

Samus: Such systems are very expensive, even those that were originally anti-air defense, upgraded to fulfill anti-missile tasks. Poland is purchasing U.S. Patriot systems, for example. They paid $10 billion for them, and are still waiting for them to be delivered – it’s a slow process.

There are some quick fixes. For example, the Ukrainian parliament could grant the United States temporary permission to deploy Patriots, or other systems. on our soil under the excuse of “military exercises.” This would send Russia the signal that their missiles could be intercepted. These complexes are mobile, so Moscow couldn’t be sure which targets are protected.

(And eventually we could) implement long-term solutions: developing an air defense system complex that would fit Ukraine’s needs. That would include systems like the Iron Dome and others, focusing on intercepting medium- and long-range missiles.

NV: Which Ukrainian companies could be involved in developing these sorts of systems?

Samus: Companies like Luch and Pivdenne stand out in this regard. But a missile defense system is more than that – it also has to include recon, or radar systems. A missile in flight has to be detected first. We have the Iskra company, for example, that has expertise in radars.

Luch has already enjoyed some success in modernizing and upgrading existing anti-air missiles, and has designed anti-air missile systems. They also have the successful Neptune, a cruise missile.

But, of course, Pivdenne remains our flagship, with extensive experience in rocketry. I think they might have some designs of their own.

The article was published at NV