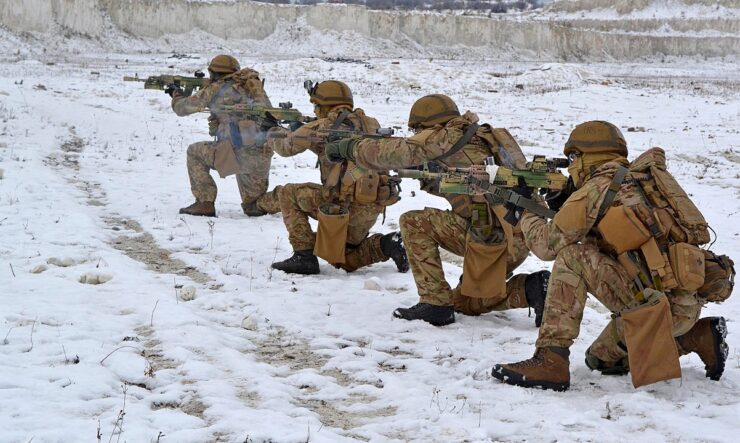 “Ukraine attacked Russia yesterday! Russian Army killed five Ukrainian soldiers who tried to cross the border in two armoured vehicles… At the same time, Kyiv launched a huge offensive on Donbas, aiming at civilian targets, among which were schools and hospitals, but also the main waterworks, electricity networks, and other infrastructure points”.

This is the front-page story that daily Informer, a Serbian tabloid newspaper with the highest circulation in the country, published on 22 February.

A much smaller headline, at the bottom of the page, informed the readers that “Putin ordered the army to enter Donetsk and Luhansk”.

Informer, as well as all other national tabloids in Serbia, are highly biased in favour of the ruling Serbian Progressive Party. The papers are regular recipients of the advertisement of the public enterprises, as well as state-funded media projects, which are often denied to the media outlets critical of the government.

Research has also shown that, at the same time, pro-government tabloids are the main promoters of pro-Russian narratives in the Serbian media space.

The front pages of other tabloids on 22 February included another headline “Ukraine attacked Russia” by Alo, as well as “Putin tore Ukraine apart like the West did with Serbia” by Srpski telegraf.

“(By recognising Donetsk and Luhansk, Putin) tore the neighbouring country apart the exact same way the West did with Serbia by recognising the unilateral independence of the so-called country of Kosovo”, the article reads.

Russian President Vladimir Putin announced yesterday that Moscow had recognised the self-proclaimed People’s Republics of Donetsk and Luhansk. He subsequently ordered the deployment of “peacekeeping troops” to their territories, which the European Union and NATO member states immediately condemned as a violation of territorial integrity of Ukraine.

These developments, however, only got covered on pages four and five of Tuesday’s Informer, while pages two and three were dedicated to the alleged Ukrainian offensive on Russia.

The article included a report on the five Ukrainian soldiers that were killed in an attempt to enter Russian territory. This story was also mentioned in BBC’s reporting of the events on Monday as an example of Russian disinformation.

“There is no evidence to suggest either of these things happened, but officials are forced to deny each every allegation, no matter how absurd or unlikely”, BBC’s correspondent Paul Adams wrote on 21 February.

The first version of Tuesday’s front page of Večernje novosti, another pro-government paper, also featured the information about the killing of the five Ukrainian soldiers. That piece of information was edited out of the print version available in Belgrade that day, possibly after it had been designated as fake news.

Meanwhile, Informer also reported, quoting the spokesman of the police of the Donetsk People’s Republic Eduard Basurin, that Ukrainian forces have started to “implement the plan to take Donetsk and Luhansk by force”.

The allegations of destroyed water and electricity sources by the Ukrainian army were also repeated, together with a photograph of a classroom in Donetsk that was reportedly hit by a grenade, with a caption: “Ukrainians target children as well”. No sources were provided for any of these claims.

Towards the end of the article, Informer also published a short textbox with a report that the Ukrainian government had denied the attacks on Russia and called the reports fabricated.

According to an article from The Guardian published on 21 February, Russia’s military spy agency, GRU, has fabricated the entire video of a Ukrainian saboteur attempting to blow up a local chlorine plant in the rebel-held town of Horlivka.

Yet another Russia-related article published by Serbian tabloids today misrepresented the factual situation. Srpski telegraf wrote about the supposed plans of Vladimir Putin to “send an army (to the Balkans) to connect Serbia and Republika Srpska”.

According to the article, after he resolves the burning issue of Ukraine, the Baltics and the Western Balkans will be among Putin’s priorities. He plans to “erase the border on Drina (between Serbia and Republika Srpska), which is what the Brits claim, even by using military if it comes to that” the tabloid reported.

“This is the scenario the West is afraid of, and it has expressed its fears through the statement of Liz Truss, Foreign Secretary of Great Britain. Namely, she stated in an interview that Putin needs to be stopped as soon as possible, because, as he said, he represents a great danger for the Western Balkans”, reads the article from Srpski telegraf.

The interview in question was published by Daily Mail on 19 February. The exact quote of Foreign Secretary Truss never mentioned the deployment of forces to the Balkans nor the border between Serbia and Republika Srpska.

“The Baltic states are at risk … the western Balkans as well. Putin has said all this publicly, that he wants to create the Greater Russia, that he wants to go back to the situation as it was before where Russia had control over huge swathes of Eastern Europe. So it’s so important that we and our allies stand up to Putin”, Truss said for the Daily Mail.

The article was published right next to the story on “the pressures stronger than ever before” Serbia will have to endure over unwillingness to impose sanctions on Russia, as announced by President Aleksandar Vučić on Monday.

Serbia has not joined the EU in introducing sanctions on Russia following the 2014 annexation of Crimea.