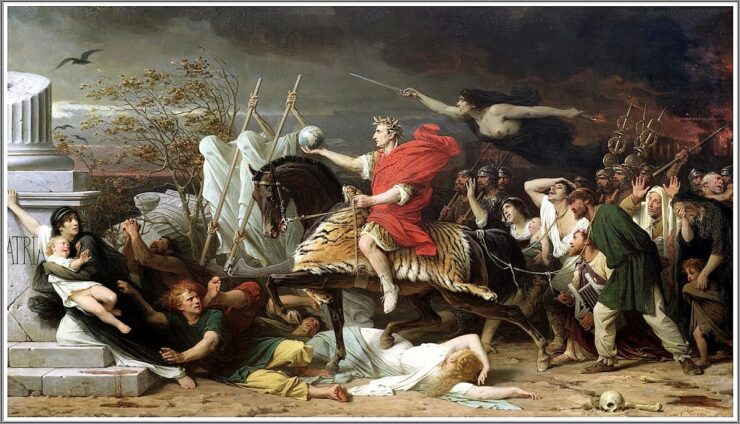 The shape of things to come – contain or appease ?

Like him or not, you must admit that Vladimir Putin has changed things. For sure, the world, the EU, NATO, and we ourselves will not be the same after the current crisis, whether there is a war or not. Mr Putin’s revisionism goes way beyond Ukraine. He seeks a return to “spheres of influence” and to a 19th-century world order. The Kremlin’s strategy intentionally revives Europe’s extreme nationalism, its old wounds and old divisions. It is no accident that Mr Putin targets nationalistic governments in the EU to rekindle revanchism across the continent.

The EU’s prosperity and peace are anathema to Russia, confronting its basic imperial instincts. The message from Moscow is simple: since you do not have a place for us in your order, we will rock that order, echoing the adage : ‘Russia is too big to ignore or isolate”.

The idea of a lasting diplomatic solution to the current conflict, avoiding war, contradicts the zero-sum base plan in the Kremlin’s playbook. The result will be either a regime change in Moscow or the subordination of Kyiv. There is no middle ground for diplomacy. Hence military escalation has been inevitable – and remains so.

That’s even clearer now than it had been, in the light of yesterday’s events. Mr Putin announced that Russia was recognizing the separatist “republics” of the Luhansk and Donbas regions – a decision with which the Russian Federation’s Security Council unsurprisingly concurred. And he also signed bilateral friendship and mutual assistance treaties with the two entities, whose main effect is to legitimise troop movements at the request of the two proxies.

But that won’t be the end: the head of Russia’s foreign intelligence agency unintentionally ‘leaked’ the next step – their merger with Russia. The next stop for Kremlin revanchism will presumably be the ‘land bridge” to Crimea and ‘merger’ of Belarus, since no one expects Russian troops to leave that country. ‘Merger’, for the uninitiated, is the nice way of saying ‘annexation’.

Diplomacy, and French president Emmanuel Macron’s convenient ideas, about where to hold a summit, recalling Sarkozy’s Georgia 2009 appeasement, fit into the plan. But diplomacy and summitry can only serve to disguise the cynicism inherent in the situation. It is – or should be – clear to everyone that Mr Putin will proceed with his exercise in shattering the European order by adapting and alternating threats and use of force again and again, with occasional modifications designed to mitigate sanctions.

Whatever the outcome of the current crisis, it will only fuel a new cycle of Putin-style geopolitical fracking as long as Mr Putin remains in power, for at least four reasons:

Easing off on the gas

If a war breaks out, the drop in gas and oil sales will be dramatic and abrupt. But even if, by some miracle, Europe is spared a war, the EU and NATO will still have to set in motion the shock-resilient upgrades in energy security that are now self-evidently vital.

For the EU and NATO, current levels of dependence on Russian energy – 40% on average for the EU, but over 90% for some countries – are proving to be a strategic vulnerability. So NATO and the EU could push forward a system of individual country vulnerability tests, recommending maximum levels of Russian gas imports – say 40% of a country’s total gas imports – and also introducing strategic gas reserve requirements, alongside those already in place as reserves of crude oil and derivatives.

Within the EU, a mix of green technologies and higher oil and gas production could offer an optimal track. And, as to external energy sources, the global LNG market can provide new gas volumes to compete with Russian gas and to deny those who control it the capacity to blackmail. Not least among such sources is the United States, whose gas output could break the one-trillion-cubic-metre barrier in 2022.

The EU’s Stockholm syndrome and addiction to climate policies are unlikely to provide, in the long run, equal treatment to natural gas and gas-fired generation, as for ordinary Europeans natural gas will be seen as “Putin’s fuel”, burdened with geopolitics. On the other side, the over-zealous pursuit of carbon neutrality punishes consumers with ultra-high prices, killing gas demand.

When it comes to existential challenges, geopolitics always prevails. The US has just rediscovered the universal validity of Ronald Reagan’s doctrine: if you want to contain a geopolitical adversary, try to control his critical revenue streams and deny him all possible sources of leverage.

Accordingly, the EU and NATO will heed the call of geopolitics and revisit climate policies following the Russian-Ukrainian crisis, war or no war. After failing to steer the EU through the energy crisis, Climate Policy HQ – a.k.a. the European Commission – will have to reconsider its aggressive and proactive mode as policy enforcer and resort to a more supervisory role. Such a move would allow each individual member state greater independence in selecting its own optimal mix of green transition measures, while respecting technological neutrality.

Evolution in this direction is, in fact, already underway.

China is actively reconsidering its climate targets, focusing on coal mining and expanding coal use alongside renewables and gas. The fashionable euphemism for this, incidentally, is ‘postponement’. But if China is ‘postponing’, there is less reason for the EU to be in such a mad rush.

And Germany, so far, the standard-bearer of hard-line green policies, will lose geopolitical weight within the EU and NATO because of its privileged links to Moscow, its role for the current crisis, and its climate policy radicalism, which have made the EU easy prey to Kremlin revanchism. These days, the concept of a ‘united and prudent’ Europe sounds like a hollow joke. Europe has been anything but united, while the European Central Bank, far from prudent, has been manically printing money to fund climate radicalism and post-pandemic recovery.

Due to the gigantic redistribution of resources and wealth, the poor are becoming poorer and the rich richer. So social cohesion will become a rare commodity. At the same time, carbon neutrality will – and should – remain a distant mirage, but it will also be a destabilising factor as the European Union is engulfed in national egoism and sauve-qui-peut policies.

The view from Sofia

So what are the takeaways for Bulgaria and for countries like it? There are several.

First, there are no quick fixes and no clear answers. We need deep thought, not just a constant string of knee-jerk reactions. We must allow ourselves a mindful time-out from daily news overload and focus on the strategic basics of the situation.

Second, there is no middle ground between the EU and NATO, on the one hand, and Russia on the other.

Third, given Moscow’s revanchist and imperial focus, there is not even much scope for ‘middle ground lite’—that is, for belonging to the Western camp while having ‘unique relations’ with the Kremlin. For it turns out that such relations represent a mortal threat to the very existence of both NATO and the EU.

The fourth lesson is more complex. Challenges will only mount, since, for Bulgaria, joining the Eurozone (EZ) will only add to the Germanocentric version of the EU that, among other factors, has brought about the current crisis in relations with Russia and has transformed EZ’s economic and fiscal policies.

EZ membership has downsides that are not to be ignored. There’s the apparently unlimited mania for printing pandemic and climate money. There is also high inflation and there are global climate ambitions (in which the EU is, incidentally, trying to punch absurdly above its weight). Together these undermine prudence and discipline in the EU and destroy social balances and cohesion, turning countries into “winners and losers”.

In preparation for joining the EZ, Bulgaria will have to cancel twenty-five years of austerity and ‘loosen its belt’, using the period to 2024 for achieving high investment spending and higher living standards on borrowed money. However, against the background of an EU spending spree and shared debt, the current outcry of the Bulgarian opposition against higher budget spending will simply become delusional once we enter the EZ.

Regrettably, through bitter experiences in the not-too-distant past, Bulgarians do not trust their elite to renounce the EZ bond and set sail on their own, moreover, under the current hike in tensions, bordering on war, with Russia.

The firm bond to the Euro and EZ membership will speed up welfare and standards alignment, funded by a cheaper and accessible money supply, driven less by market demand and more by access to subsidies. In more than one way, two systems – Russia’s oligarchic and the EU’s dirigiste and subsidy-dominated – both reliant on public money, are working in unholy tandem to undermine the basis of democracy, its real foundation. Which is, of course, the market economy.

Subsidies are the curse of the EU and, sooner rather than later, they will destroy beyond repair the dirigiste EU model. EU policies are tailored to the average, oriented to mediocrity and to levelling. Bulgarians are by nature individualists. They know better than that. And they can do better than that. It’s time to think the unthinkable.

Yesterday’s decisions in Moscow will have a sobering effect and will create historical ripples. More than ripples, in fact: they will generate a whirlwind of events that will shape the rest of the 21st century. For the whirlwind, Mr Putin, is what you get when you sow the wind.