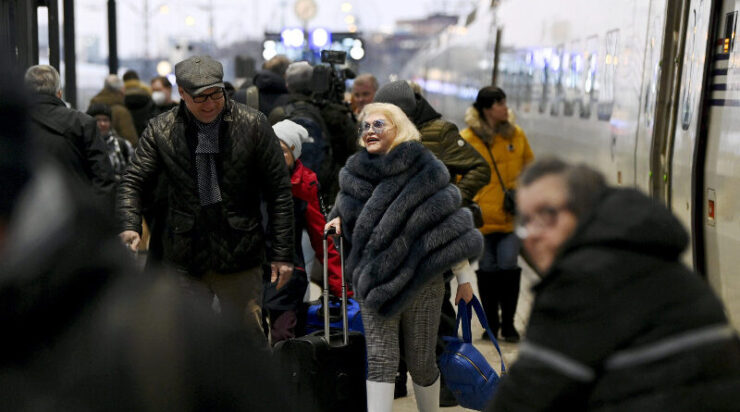 Russia is a problem when aggressive and Putinised. But it’s no less of a challenge when it is isolated, sanctioned and pushed into a corner. Unfortunately, however, the West has encouraged the transition of the same Vladimir Putin from the promise of the year 2000 to the evil of today. And it has done so consistently, under a succession of leaders stretching from George W. Bush, through Barak Obama and Donald Trump, to today’s Joe Biden. To a large extent, we’ve got the demon we deserve.

Today we feel justified outrage at his conduct. But the fact is that Mr Putin reached his current Mephistophelean stature, in large measure, because the world persistently turned a blind eye to his dark side. It all started with the explosions at apartment buildings in Moscow, Ryazan and Volgodonsk. Then there was his handling of the sinking of the submarine Kursk, and of the terrorist acts at the Moscow performance of Nord Ost in 2002 and the school at Beslan in 2004. And then there came the wars in Georgia, Crimea and Syria.

The signs and stages of his transformation into the political monster of today have been there all along, for all to see, visible to the naked eye.

At first he was coopted. Then he was ignored. Then he was appeased. And now he is taking full advantage of his “nuclear shield” to wage conventional wars with impunity. No one except Ukraine dares to stand up against him for fear of starting World War Three.

Overwhelmed by the news of nearly 1.5 million refugees on the record from Ukraine, we fail to note the growing number of forced emigrants from Russia itself, driven by the prospect of a collapsing economy and a North Korean-style dictatorship. Bombs and missiles are catalysing migration in Ukraine, while sanctions are having an identical impact in Russia, by annihilating the country’s economy and its citizens’ welfare.

With each new round of sanctions – especially their “ultimate” version, involving restrictions on reserves, gas and oil – revenues will fall sharply. The proceeds from the sale of crude oil are critical, at nearly a billion dollars a day, with another half a billion a day coming from natural gas export. Add the embargo on sales of other raw materials and mineral resources, and a good 65% of the Kremlin’s money is gone.

As they manage the consequences of global markets’ collapse, the EU and NATO should look beyond the immediate horizon and at the range of options available to them to mitigate longer-term Russia-associated risks. If Russia collapses too fast, potentially disintegrates or allows itself to be economically absorbed by China, the implications for the global order would be immense.

So my message is simple: do not leave the impact of sanctions on Russia unattended for too long, or they might, in line with the Law of Unintended Consequences, produce a result we won’t like.

The potential for change from within

Civil servants are the main support base of Putin’s regime, and they will hold on to their guaranteed-income jobs, with salaries, paid in depreciated – and fast-depreciating – roubles, racing against inflation. But the sanctioned industrial sectors – both private and public – will bear the brunt of the sanctions tsunami, with employment, incomes and security in them all taking a battering.

Even if Putin has unknown buffers and reserves, they will pale in comparison to the scale of social payments and budget expenditures for the unemployed and to massive losses of income. Moreover, despite the post-Crimea propaganda that Russia has risen successfully to self-sufficiency in primary goods and services, the facts about missing essential foods, medical equipment, consumables and drugs, and essential imported components for Russian industries’ value-chains still tell quite a different story.

After he loses energy as a foreign policy tool (as it seems he will), it’s possible that the only ‘argument’ Mr Putin will have left will be emigration. And that is one stone with which he could kill a lot more than two birds.

Four or five million refugees are expected from the war in Ukraine and, though it will be a tough challenge for the West to accommodate then, they will be welcome as victims of an unjust war. So will prominent Russian opposition figures who have fled from Mr Putin’s regime, fearing for their lives. But the count of people running from the evil sitting in the Kremlin will be swelled by an increasing number of Russians who will be escaping mainly from a sanctions-demolished economy. And that releases internal pressure on Mr Putin.

Letting the steam out in refugee-averse Europe

He has long encouraged political emigration from Russia, as tens of thousands of opposition-minded intellectuals have moved abroad, either temporarily or permanently. The recent crackdown on opposition media will add to the already vocal chorus of dissident voices abroad. But arguably the only way to stop Mr Putin and to secure transition to a friendlier Russia, more prone to co-existence, is to guarantee a critical mass inside the fortress. Mr Putin knows this, so it is in his interest to “purge” dissidents by opening Russia’s borders and letting them go abroad. Apart from removing obvious irritations, this reduces the likelihood of protest-induced change.

Now, Russian traditions and current realities alike mean that power shifts rarely come from the streets, mass anti-Putin demonstrations could have an effect at one remove, by triggering a “sobering” process at the top of the clan of siloviki – men with a security background like Mr Putin’s own – that make up his regime. If these are jolted into the realisation that he has become a liability, that continuing to support him is even more dangerous than the risky step of moving against him, then the man in the Kremlin is in serious trouble. But as long as he avoids that and has the money to sustain his Praetorian Guard and its security forces, he will be relatively safe, capable of clinging to power and striking back, by means that include weaponizing emigration.

NATO and the EU must face this reality. Sanctions could bring many unintended consequences far beyond those one can reasonably expect. Their main advantage is to spare us the need for military action and intervention. But this could fade into insignificance in comparison to the scale of destruction and the entropy that they are likely to inflict.

Much depends on time-scales.

If Mr Putin loses the war in Ukraine, then that, rather than anything that happens in Russia, is likely to determine his fate and to do so quite quickly. Given where we are now, that would be a desirable outcome. And increasing direct military support for Ukraine would be a way to make that outcome more likely. It could change the balance of power, accelerate the outcome, shortening the period of uncertainty and promoting a managed transition to the post-Putin era, which would offer new win-win opportunities.

However, if the West relies primarily on sanctions, things could be a lot messier and more protracted. Change in Russia and the removal of Mr Putin might come in the next few months. But they might not. Much would depend on the depth of reaction and the spread of the West’s punitive actions. The EU and NATO member countries will also pay a high price via market turbulence, which would be significant in itself, but could also affect resolve. And the longer the process, the more likely is an impoverished Russia to be the result of it. That is something to be avoided: for an impoverished Russia will become a permanent threat to world order and security, whoever oversees it – even if Mr Putin is replaced by some sort of “Putin-Lite” regime.

Not for the first time, the West has to look at the big picture and to think long-term – or else suffer even longer-term consequences. It’s time to imagine the world after Putin and act accordingly.