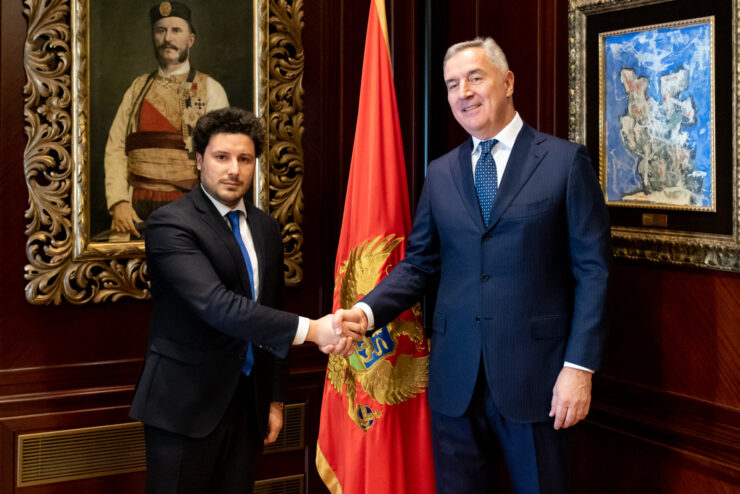 After two seismic earthquakes that toppled the government and ousted the parliament speaker, Montenegro is on track to get a minority cabinet that will try to stabilize a deeply divided country and activate European integration process blocked by the political crisis.

“Representatives of the URA civil movement and their political partners have unequivocally assured me that they have a parliamentary majority for the election of the 43rd Government in the Parliament of Montenegro,” President Milo Djukanovic said, entrusting the mandate to URA President Dritan Abazovic.

As the deputy Prime Minister of the previous expert’s government of Zdravko Krivokapic, Abazovic in early February denied his support to the Prime Minister and is on his way of forming a new government relying on minority parties and the support of Djukanovic’s Democratic Party of Socialists (DPS).

The support that the minority government received from the DPS, which suffered a narrow electoral defeat in August 2020 elections and lost power after three decades, is met with sharp reactions from the Democratic Front (DF) and Democratic Montenegro, with whom the URA formed the government after the elections.

Critics accuse Abazovic of violating the electoral will of voters and making pacts with DPS, the strongest opposition party. They claim that the new parliamentary majority is politically legal, but it is not legitimate because all the constituents of the majority which until yesterday promised not to enter into post-election combinations with the DPS.

Abazovic, an ethnic Albanian and the only political figure in the previous cabinet, set the condition that due to extremely pro-Serbian attitudes, lack of clear Euro-Atlantic orientation and acting on the instructions of official Belgrade, there is no place in the minority government for the DF, the strongest member of Krivokapic’s coalition.

His second condition was that there would be no DPS staff in the new cabinet, which remains in opposition with several smaller and minority parties with 40 seats in the 80-member parliament. Abazovic consulted with Djukanovic, who agreed that the DPS should not enter the new government but provide it with external support that raises the value of political action for the Socialists.

Immediately after the 2020 election, Djukanovic predicted that Krivokapic’s coalition would not be able to survive in the long run, which proved to be true. When the ruling coalition disintegrated, the Socialists immediately offered to support the minority government, and the head of state made it clear that the new Prime Minister would be Abazovic.

The new Prime Minister is now under double pressure: the Americans and the European Union expect him not to give in to demands from the Serbian president and pro-Russian forces in Montenegro, while Aleksandar Vucic reckons Abazovic will not jump into President Djukanovic’s political “embrace at a time when the two leaders are exchanging charges.

President Djukanovic claims that “Greater Serbia’s aggression against Montenegro aimed at annulling Montenegrin independence or partitioning the country” failed, while President Vucic responds by accusing Djukanovic of openly pursuing anti-Serb policies and marginalizing Serbs, who make up 28 per cent of Montenegro’s 680,000 population.

Some Serbian government ministers even openly insinuate that Djukanovic is behind the planned assassination of Vucic, which, without evidence, is linked to one of Montenegro’s two major drug cartels. During his recent visit to Athens, the President of Montenegro asked Greece for protection from “malignant influences of third parties”, which is a clear reference to Serbia.

A special role in the attempts to destabilize the government in Podgorica is attributed to the Serbian Orthodox Church, which, dissatisfied with the law on religion, organized mass protests across Montenegro last year and significantly contributed to the defeat of Djukanovic’s DPS. Former Prime Minister Krivokapic is the personal choice of one of the bishops of the Serbian Orthodox Church, and his government was inaugurated in Ostrog, one of the most famous Montenegrin monasteries.

Critics claim that no decision of the previous government was possible without the consent of the Serbian church, which the government in Belgrade is instrumentalizing in order to exert its influence on Montenegrin political currents.

Another powerful channel is the Democratic Front, whose leaders Andrija Mandic and Milan Knezevic are regular guests at consultations with President Vucic. The two Praetorians tried to enter Krivokapic’s cabinet for months, but the Prime Minister refused arguing that the result would be an even more dramatic division in society between pro-Serbian voters and sovereignists from Djukanovic’s party.

The president of the Movement for Changes and a member of the DF, Nebojsa Medojevic, claims that the new government is formed by anti-Serbian parties, warns that this will lead to “homogenization of the Serbian political factor and radicalization of their political demands” and tells Abazovic that he will be “responsible for Montenegro’s disintegration”.

Abazovic, meanwhile, presented the priorities of a minority government to one of the leaders of the Democratic Front, saying he would like DF support, but Mandic wants a government within yesterday’s parliamentary majority and refuses any co-operation as long as the new cabinet has support. DPS. The DF announced that it would block Montenegro with protests due to the “betrayed electoral will of the citizens.”

Abazovic also addressed the leader of Democratic Montenegro, the dismissed Speaker of the Assembly Aleksa Becic, but he encountered a wall of silence. Becic was elected the head of the Parliament by the ruling alliance of the DF and the URA movement, and he was replaced by the votes of the URA and the opposition led by the DPS.

Becic called Abazovic’s mandate a “constitutional coup” recalling that URA leader inflicted the worst insults on President Djukanovic, while the DPS called his movement “a group of criminals and thieves.” The leader of the Democrats, who rejected the invitation to participate in the formation of the new government, persistently calls for early elections and the continuation of mass protests. Abazovic said it is “lowering politics to the street level.”

Failing to reunite the former three-member majority, Abazovic after consulting with all political entities – including at least 70 deputies – informed the President that he had the necessary majority to create a minority government based on European and civic policies supported by seven parties Euro-Atlantic values.

While the national Parliament remains blocked, there have been calls for Abazovic to talk again with parliamentary majority leaders to form a 46-member reform government, but he says he already has a 49-member majority behind him.

This avoided the two scenarios that were discussed: the renewal of the old majority or going to the early elections. As previously announced, Abazovic’s cabinet is expected to have 18 ministers and three vice-presidential seats, but the final division depends on the definitive stance of the pro-Serbian Socialist People’s Party (SNP). If the SNP enters the Government, they and URA would have six ministries each, and the rest would be given to minority parties with their partners. A definitive decision is expected from the SNP leader in the near future.

Djukanovic told Montenegrin Television that he believes there is a high degree of agreement on what should be done in Montenegro now. The priority is to continue negotiations with the European Union, which in recent months have been stalled by internal political debates.

In an environment in which it is still not entirely clear who is the parliamentary majority and who is the opposition, it is certain that the struggle for influence will continue, whose actors are the international community, official Belgrade and the Serbian Orthodox Church. A lot of will also depend on the unity of the parties that resist the minority government.

The United States and the European Union have repeatedly warned of the harmful dominance of ethnic and religious issues in Montenegrin society. US Special Envoy Gabriel Escobar has reiterated that the pro-Serbian DF is not a partner of Washington because of its focus on ethnic divisions.

The West has clearly supported Abazovic’s efforts to get out of the institutional crisis as soon as possible, praising the “peaceful transfer of power in accordance with the Montenegrin Constitution”, but the question is how much the new minority government will be able to commit to Euro-Atlantic integration.

Political analyst Zlatko Vujovic told Radio Free Europe that the West’s insistence could be called into question by the new government’s priorities, such as resolving issues with the Serbian Orthodox Church, the census and others items on Belgrade’s and Vucic’s agenda – which will not receive the support of the opposition.

The Serbian Orthodox Church will undoubtedly try to maintain great political influence and expects the new government to sign the Basic Agreement with the Serbian Church, which, among other things, envisages the introduction of religious education in the public education system – which meets great resistance from secular Montenegro. Abazovic already had a “private meeting” with Serbian Patriarch Porfirije in Belgrade.

It is also uncertain what moves the Serbian President will make, who did not spare money, media and other pressures before the 2020 elections in order to influence the political events at the time and remove Djukanovic’s party from power. If he decides on such a scenario again, analysts predict that there will be no political stabilization soon, but the mitigating circumstance is that Vucic will concentrate on war in Ukraine and the presidential and parliamentary elections in Serbia scheduled for April 3.

Observed in the medium or long term, the seismic shift of political soil in Montenegro will continue because the same actors will have to agree even after the formation of the new minority government.