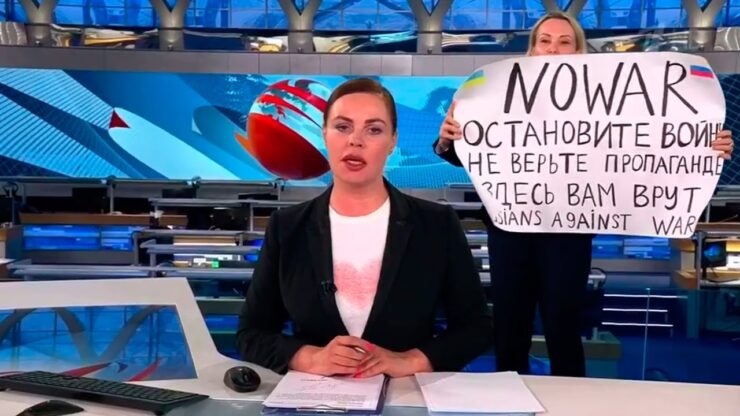 In mid-March, the entire democratic world has been admired by Marina Ovsyannikova, a courageous employee of Russian propagandist First Channel who was not afraid to appear in its live show with an anti-war poster. However, Ukrainians were not moved by such an act of “good will”. On the contrary, they immediately saw in it a well-directed production, which, as it turned out later, was the first part of an accurately planned psychological operation. Recently the one could watch the second part of it, for which everything was actually started – the Ovsyannikova’s address on Italian television, where she called for lifting sanctions on Russia.

On March 17, a real bomb exploded in the world information space: during a live broadcast of the Vremya program on Russian First Channel, one of the employees stood behind TV presenter Ekaterina Andreeva and unfurled an anti-war poster calling: “No war. Stop the war. Don’t believe the propaganda. They’re lying to you here. Russians against war”. It soon became clear that it was Marina Ovsyannikova, the editor of the First Channel. Everyone at that time was delighted with the courage of the Russian woman, who was not afraid to show her civic position at such a difficult time and to openly speak out against the war in Ukraine.

However, in Ukraine itself, which is already accustomed to various Kremlin’s hybrid special operations, the “enlightment” of an employee of one of the main voices of Russian propaganda was qualified by the well-known phrase of Konstantin Stanislavski: “I don’t believe”! Moreover, the Ukrainians started paying attention to many interesting details of Ovsyannikova’s “performance”, which indicated that it was nothing more than another Kremlin’s psychological operation (PSYOP). For example, it was pointed out that the Ostankino TV Center, where the First Channel broadcasts, has so much security in its spacious studios that Ovsyannikova simply wouldn’t have been able to reach the host’s seat and would have been intercepted. The others noted that even during Perestroika in the late 1980s, there was a man on live TV-shows whose task was to turn off the broadcast immediately if something unpredictable happened. The timing of Ovsyannikova’s speech is at least 4 seconds, which, in such conditions, is almost an eternity. Another interesting detail is that just before she went on the air, the camera started showing a general plan to capture more studio space in the frame: as if purposefully to fit in Ovsyannikova with her poster. No less interesting is the behavior of the news anchor Ekaterina Andreeva. Anyone who doesn’t know that something extraordinary is about to happen to them at the exact moment, will definitely show some emotion because of the surprise. However, with a poker face, she continued running the show as if nothing happened at all. Also, the TV recordings of the show, which were allegedly filmed by viewers on their phones, began to appear on social networks. And here the logical question arises: what is the idea of filming the usual evening news? There can be only one answer to it: it means that those who filmed it probably knew what was going to happen and were waiting for it. Also the video with Ovsyannikova immediately became a top story in foreign segments of Twitter.

To understand the whole picture, we should also pay attention to what happened after the broadcast. According to Article 207.3 of the Russian Criminal Code – “Public dissemination of wittingly false information about the use of the Armed Forces of the Russian Federation” – the Ovsyannikova’s “performance” could have cost her 15 years in prison. And if she had done it the way the individual protesters do in Russian squares, and had not been a part of a well-directed play, she definitely would have spent next several years in prison. Instead, she got off with only a scare – a funny fine in the amount of 30 thousand rubles (about 280 Euros). That is, all of the above indicates that everything that happened on the First Channel was a well-planned PSYOP. Actually, it was its first stage.

The second stage of the “Ovsyannikova” special operation, for which, in fact, everything was actually started, could be observed these days. On March 27, Ovsyannikova took part in a TV show on the Italian national TV channel RAI 3. On her Instagram page, she dedicated a post to her address, in which she wrote the following: “Russophobia is unacceptable. Russians should not be collectively responsible for what is happening in Ukraine. The blame for this lies solely with Vladimir Putin. During the “Che tempo fa” live TV-show of the Italian RAI TV company I spoke out against Western sanctions. Primarily ordinary people are suffering from them. My disabled mother cannot buy the necessary medicines. My daughter can’t pay for school lunches with her virtual card. There is no sugar on store shelves, oil and hygiene products are running out”…

Well… It is more than obvious that Putin is guilty and should be responsible for all the deaths. However, this is not why Ovsyannikova spoke to an Italian audience. Her main message was: “Innocent Russians suffer because of the sanctions, and therefore the West must urgently remove them.” To enhance the effect of her call – she mentioned of a disabled mother, a child and food problems. That is, she tried to play the sympathy card.

So, now we can see the whole plan and the stages of the Kremlin’s “Ovsyannikova” PSYOP: a resonant protest on the federal channel and publicity around the world – promoting in the world media the image of Ovsyannikova as a brave opponent of the regime – her further use as an effective information channel to promote the narratives needed by the Kremlin. The target audience of the “Ovsyannikova” PSYOP is the Western one, primarily European. All this show from the very beginning was designed for it. The inscriptions “No war” and “Russians against war” in English clearly indicate this. Her participation in the Italian TV-show is also hardly accidental. Italy is one of the countries that from the very beginning of imposing the sanctions against Russia have repeatedly called for their lifting or easing.

As for Ovsyannikova’s words that “Primarily ordinary people are suffering from them,” the Kremlin, through her mouth, emphasized them not because it cares much about ordinary Russians. It really doesn’t care about them. But it really cares that over time, instead of sitting in front of the TV and absorbing its propaganda, they may eventually go on hunger strikes and threaten the current Russian regime. There is no such threat so far. According to propaganda TV channels, polls on the streets of Russian cities, posts on Russian social networks, various “patriotic” flash mobs or interceptions of conversations of Russian soldiers in Ukraine with their mothers and wives published by Ukrainian special services – “ordinary Russian people” continue supporting Putin and his “special operation” in Ukraine. If they had really suffered, as Ovsyannikova says, they instead of supporting him would have demanded an answer: “Why and for what should we suffer”? Instead, as the same street polls show, ordinary Russians are genuinely happy to be sanctioned and to have the same life they had in the Soviet Union, when there was a total shortage of everything and a cold war with the “imperialist West.” The main thing for them is to have a “strong” leader and the greatness of the Russian state.

In fact, the main “victim” of sanctions is Putin, who is losing the financial resources to continue the active destruction of Ukraine, as well as the servants of his regime, who are losing billions of looted money and the access to all the benefits of Western civilization that they love. Therefore, one important conclusion can be drawn from the “Ovsyannikova” PSYOP: the sanctions are in effect. They are really destroying Putin’s economy, and the Kremlin is really frightened and annoyed. Therefore, no matter what new PSYOPs with Ovsyannikova or someone else the Kremlin is going to start, no matter how it is going to play the sympathy card, the sanctions are not something that should not be lifted – they should be increased both in quantity and quality.