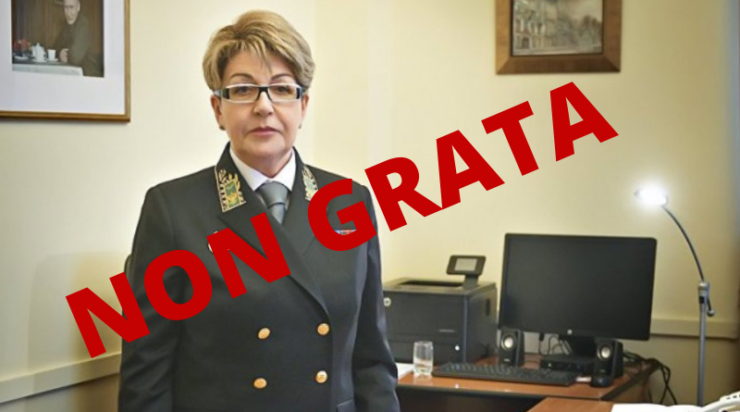 Ukraine War: The Battle of Bulgaria

The Russian Ambassador is now bound to leave Bulgaria. It should be sooner rather than later. For the gloves are now off in our conflict with the murderous regime of Russian president Vladimir Putin. And the quicker we realise that, the better.

We have yet to absorb the depth of the consequences of the war in Ukraine for us; for our internal and international relations; for our alliances, the EU and NATO; and for the world, both near us and far away – the Balkans, the Black Sea, Russia, and even China. Vladimir Putin has broken 77 years of peace. Putting the pieces of our world back together will be a long and painful process.

Neither the West nor East Europe can afford to lose the war in Ukraine. Much less can we pretend that Ukraine’s fight is not our fight, that it’s not our problem. The degradation of relations with Russia has triggered a wave of confrontation in Bulgarian society, in Bulgaria’s political and business circles. Reconciling right and wrong is no longer possible; the dilemma is either/or, and even-handedly allocating sympathy to both aggressor and victim has become specious and dangerous.It is only a matter of time before virtual casualties translate into real ones, as the Russian special services activate organised crime in Bulgaria.

In early March, Bulgarian prime minister (PM)Kiril Petkov sacked his defence minister, Stefan Yanev, for pussy-footing about Russian intervention in Ukraine – notably by going along with Kremlin euphemisms about “special operations”. Petkov proceeded to annoy the Russians further by joining the EU and NATO in condemning Russian aggression and talking, straightforwardly, of “war”.

Next, deputy PM Assen Vassilev hinted at the logical and obvious conclusion: that the war now raging made gas trade and new contract negotiations with Gazprom impossible.

The gloves are off: Russia seeks to oust the Bulgarian government

And the Kremlin now seems to have called its fifth column to arms.

Now, it’s pretty clear that, over the last couple of years, there has been very close coordination – in word and deed – among a small group of men. Thus:

As will be evident, the members of this motley crew have their differences and conflicts. But all of them have been protecting the Bulgargaz-Gazprom axis. And they very nearly succeeded.

As early as September 2021, the GERB “dream team” at the helm of Bulgarian state gas company Bulgargaz started negotiating with Gazprom, ready to sign a new long-term contract for natural gas supply and present it as a fait accompli. But, unfortunately for them, time ran out just a little too soon.

At the top of the list of Russian ‘agents of influence’ in the Bulgarian gas industry is Vladimir Malinov, CEO of transmission system operator Bulgartransgaz. He was architect and chief executor of the Turk Stream pipeline, Russia’s main strategic project in the region, which, along with its “bigger sister” Nord Stream, opened the way to war in Ukraine. But the top managements of Bulgartransgaz and state gas trader Bulgargaz are pretty much packed with pro-Russian and pro-Gazprom executives.

And now, as discussed recently in Analyses and Alternatives, that same circle of like-minded SOE managers persists in foot-dragging on the expansion of the Chiren Underground Gas Storage facility (UGS), preventing the large-scale entry of alternatives to Russian gas, such as liquefied natural gas (LNG) from the US and elsewhere, into Southeast Europe (SEE) and Central and Eastern Europe (CEE). Result: instead of storing gas in the Chiren UGS, Greek gas traders plan to store their LNG-derived gas in Italy.

Eroding the Russophiles’ economic base

The big concern of the anti-Western part of the Bulgarian political elite is that sanctions against Russia will undoubtedly erode the economic base of its influence. One aspect of this is the direct impact of the war on the value of Bulgarian imports from Russia, which are considerable and have grown recently, rising from BGN 3.6bn in 2020 to BGN 5.8bn in 2021, a year-on-year increase of 58%. Another is the dominance of the specific Russian-born politico-oligarchic corruption model, which affects the very core of Bulgarian politics.

Suffice it to refer to the fuel panic evidently meant to destabilise the government and the two fuel retailers – Insa Oil and Saksa – that are prime suspects in causing it. The same pattern of hybrid Russia-sponsored action is, in fact, repeating itself across CEE. The common denominator and aggregator in all cases is the coordinated work of the Russian agentura – both its professional intelligence agents and its “agents of influence” – to amplify one central mantra: “Russia, the indispensable energy supplier”.

The scale of Russia’s overt and covert penetration in the Bulgarian economy and politics entails a sustainable long-term dependence which, if unchecked, will compromise the capacity of any Bulgarian government to tackle crises and address development challenges. A nation divided between Ukraine and Russia on the war cannot find the point of intersection needed to share interests and agree on common actions.

Many Bulgarians will be appalled if, one day, an accurate picture emerges of Russia’s indirect control over huge areas of political life and of the economy, not only in the banking and financial services spheres, but also – and especially – in the spheres of energy and tourism. The depth of interconnectedness between oligarchic and criminal circles, on the one hand, and the Russian secret services on the other, represents a mortal threat to Bulgaria’s national security.

Many of the investments that formally originate in Western banks, investment funds, etc, are actually Kremlin-controlled, run by funds managed either by Russian oligarchs or directly by firms that are front companies for the Russian special services. In addition, their reach extends to both traditional and renewable energy sources, the chemical industry, oil and gas refining and processing – and even the new digital economy.

Alongside the escalation of the conflict in Ukraine, there has been a mobilisation of the Bulgarian political oligarchy and prosecutor’s office and a noticeable uptick inthe organised crime scene, which is dependent on Russian commodity and money flows.

GERB parliamentarian Dani Kanazireva provoked a lot of mirth last week when, during a debate in the National Assembly on abolishing the Special Courts system, she came out with the priceless utterance: “Don’t touch organised crime! There will be chaos.” Well, maybe she did put her foot in it. But at least she was pretty frank. And, in fact, quite accurate.

The “Borisov model” – which is a local copy of the “Putin model” upgraded to take account of Bulgaria’s NATO and EU membership – is based on two principles:

The main difference between the original model and the upgraded version is that the thugs of the 1990s have become businessmen, who wear suits, have “legit” businesses and are members of respected employers’ organisations.

As to the political parties themselves, they have become copies of the organised-crime groups: party members seek collective privileged access to pubic funds, enrichment and mutual protection – mainly at the expense of national or shared public interest. Bulgaria’s political landscape, in its grand design, mirrors Russia’s.

Just as Putin co-opted the oligarchs and literally bought peace in Chechnya from the thuggish Ramzan Kadyrov – with an annual $6 billion of state budget money – so too MrBorisov tried to play king and buy peace with the underworld, positioning his party, GERB, as the equivalent of Putin’s United Russia. That is, as the party of those in power. Posts, public cash and spheres of influence and control (political fiefdoms) were distributed within closed partnerships involving political oligarchs, organised crime and captured institutions.

Ms Kanazireva’s “gaffe” in parliament last week, thus, was in fact a deliberate and none-too-thinly veiled threat: “Don’t pressure us because we control Bulgaria’s criminal underworld,” she was saying, in effect. “If Borisov ends up in jail, his power-sharing arrangements with the underworld will fall apart, public executions will resume, and business people, politicians, and journalists will be killed, or kidnapped, or both.”

The battle for Ukraine translates, in Bulgaria, into a last-ditch effort to resurrect the implanted Russian oligarchic model, which has captured the country’s institutions – and the struggle to defeat that effort. We have much to lose, in terms both of freedom and of intangible and material asset values. Getting out of the multi-layered crisis we find ourselves in depends onthe outcome of the clash of choices, currently raging across Europe, for the public mind on the war in Ukraine.

One thing is for sure: we will not win that fight unless we leave our comfort zones – and take our eyes off our laptop and mobile screens. Lively public expression of pro-Ukrainian and anti-Putin sentiments is essential to set the ball of change rolling. The more completely, the more radically, and the quicker we break out of the tangle of Russian snares – both mental and material – that currently enmeshes us, the less damage we will suffer.

Sergey down, Eleonora out

Russian diplomats across Europe are now losing their tempers, regularly crossing red lines of well codified diplomatic conduct. It’s understandable, for they correctly sense that they have been set an impossible task: that of securing what Moscow’s foreign ministry calls a “diplomatic escort” for Kremlin political moves. These diplomats’ anger and threat-mongering indicate desperation and impotence to turn back the tide of colossal and irreparable loss of image and reputation. Formerly genial and urbane foreign minister Sergey Lavrov and his trained diplomats have seen diplomacy fail and know that they have been turned into feeble apologists for medieval thuggery.

It’s against this general European background that the arrogance and threats of Eleonora Mitrofanova, Russia’s Ambassador to Bulgaria, must be seen. What started with a direct affront to the government – telling the Russian audience that “the people of Bulgaria do not support their government’s rhetoric and actions regarding the special operation in Ukraine” – ended with direct threats displaying photos of Russian missile devastation area in the war zone and a sinister warning to Russian tourists that they should give Bulgaria a miss for their summer holidays this year as it will not be a safe place.

That, it should be added, is actually the “softball” side of the Kremlin’s act! The “hardball” side is mainly down to Russian military intelligence – the ruthless GRU – and takes forms like murder by novichok and explosions at Bulgarian ammunition depots. The next step for Russian secret services and their Bulgarian proxies will be reactivation of the underworld – which will become a certainty if direct military aid is sent to Ukraine.

PM Kiril Petkov has attempted to avoid a diplomatic breakdown with Russia by meeting the Russian Ambassador in person and by moderating his deputy Mr Vassilev’s call for no further contracts with Gazprom, leaving the door open. That is a classic case of appeasement-gone-awry. In the ongoing war for Ukraine in Bulgaria, Moscow needs no ceasefire. It wants a further escalation before de-escalating the situation and demands the capitulation of the Bulgarian government. Ambassador Mitrofanova’s new mandate from the Kremlin is: topple the Petkov government, destabilise Bulgaria, and to hell with the consequences! It’s classic Louis XV: “Après moi, le déluge.”

War has left the authorities in Sofia with no option but to ask the Russian Ambassador to leave gracefully or face expulsion. Either way she’ll go. But it would be better for Bulgaria – and more dignified for Ms Mitrofanova – if she goes soon.

We are at war. It is time for the new Churchills to face the consequences. Ukraine has already produced a Churchill. Let’s see what Bulgaria can do.