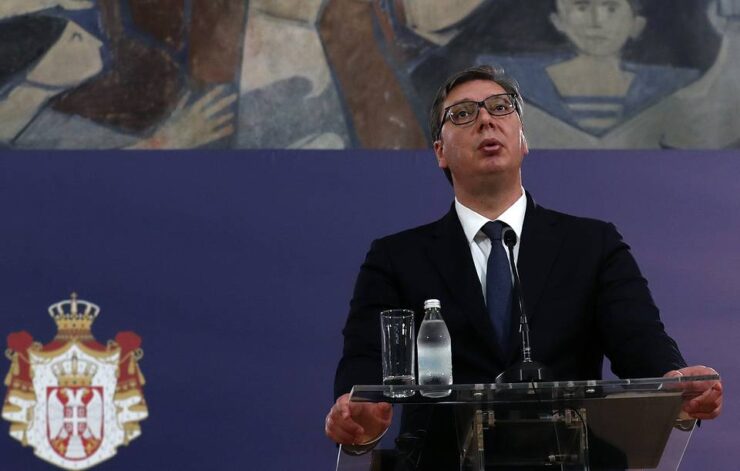 Between Brussels and Beijing. Difficult Choice of a New Vucic Term

Snap elections were held in Serbia earlier this month. The citizens of Serbia elected a new president and a new parliament. Although the word “new” is inappropriate here. In fact no one doubted that Vucic would keep his post. And his SNS holds a parliamentary majority.

The election results fully confirmed previous forecasts. Incumbent President Vucic has already won in the first round, gaining more than 50%. For the first time in the modern history of Serbia. His main rival from the opposition, Zdravko Ponosh, received 18%.

The ruling SNS got 43%, and its coalition partners from SPS-JS got 11%. The main opposition force, the “Ujedinjeni Bloc”, came in second with 18%. Smaller political parties also entered the parliament. Like the eco-liberals from Moramo, or national democrats from  NADA.

Snap elections campaign in Serbia was promoted to strengthen and legitimize Vucic’s regime. He had an absolute advantage over his political opponents before. But the last election two years ago was ignored by the opposition.

Thus, political power in Serbia will not change after the parliamentary and presidential elections. But the results of voting showed a significant “right turn” for Serbian society.

It was also noted by the President and leader of the ruling Serbian Progressive Party Vucic. He said his new term task is to keep Serbia from turning to right-wing discourse in politics. He also indirectly marked that he is ready for a dialogue with the democratic opposition of his main opponent, Dragan Djilas.

The main factor caused the strengthening of radical right-wing politicians in Serbia is russian military aggression against Ukraine. This topic, quite unexpectedly, became one of the central ones in the election race.

Vucic and his political partners actively used the rhetoric of importance to keep political regime for peace and stability. And the right-wing radicals actively exploited the anti-Western sentiments of Serbian society.

According to opinion polls, more than 60% of Serbs believe that the United States and NATO are guilty in Russian aggression against Ukraine. And only 5% blame the Kremlin.

So in such a security situation in Europe and almost inevitable economic problems, Vucic will have to maneuver between the right and the left, the West, Russia and China.

Just on April 7, during the vote to suspend russian membership in the UN Human Rights Council, Serbia did not abstain, but voted in favor. Like all other countries in the Western Balkans, along with BiH. Serbia actually has unofficial veto to the neighbor country policy through the leadership of the Republika Srpska. And it also says a lot.

But European partners of Belgrade have a negative position for military cooperation between countries planning to join the EU and China. Active disturbance was also initiated by resent military supplies in Kosovo, which leadership immediately began appealing to Brussels.

Thus, described events last week have shown that Serbian leadership will feel increasing difficulties to conduct foreign policy maneuvers in traditional manner. Public contacts with Moscow now seem out of place. Therefore, for his multi-vector policy Vucic is left with Brussels and Beijing at least.