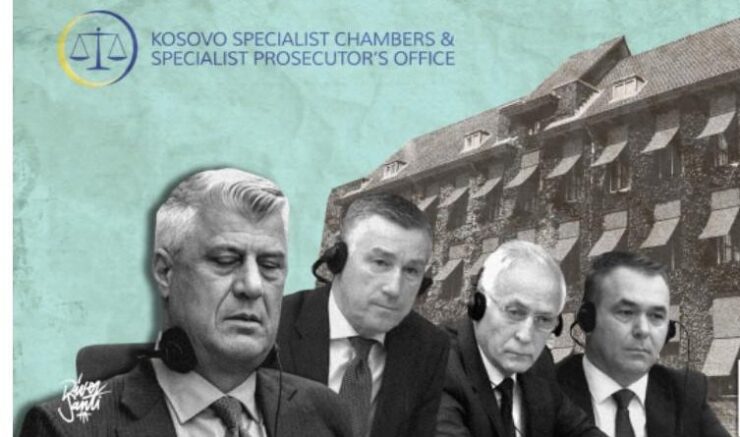 War crimes have no statute of limitations, as do crimes against humanity, humanity, genocide. War criminals will have to answer for their actions in national or international courts. Responsibility for war crimes has been constantly remembered in the countries of the former Yugoslavia, where the process of prosecuting suspects is extremely slow. Courts that last for years are even slower. Therefore, the number of those convicted of war crimes remains very small.

The European Commission, the OSCE, and local human rights activists draw the authorities’ attention to this. However, the process remains virtually frozen.

With the beginning of Russia’s full-scale invasion of Ukraine and the crimes committed by the Russian military in Ukrainian cities, the issue of prosecuting war criminals is being raised internationally. It signals to war criminal Putin that he will not escape responsibility. Like his surroundings.

It does not happen immediately because the collection of evidence, documentation of each type of crime, investigation, and formation of cases have their characteristics, so it takes several months or years. As the example of Kosovo President Hashim Thaci shows, there is no escaping justice.

He and his immediate entourage are currently in The Hague on charges of war crimes committed during the 1997-1999 war. The journey behind bars has been long, as Thaci has been talking for many years and continues to say he is innocent. Until 2010, the issue of prosecuting high-ranking Kosovo Liberation Army officials was raised only in Serbia, where crimes by senior officers and military personnel against Serbs in Kosovo were constantly reported. The self-proclaimed republic responded with accusations of genocide committed by Serbia and the Milosevic regime.

Such mutual statements have spread in the media, negatively affecting people’s relations in Kosovo and Serbia. The situation has worsened as Serbs have been indicted at the ICTY for crimes in Kosovo in the late 1990s. Former ICTY prosecutor Carla Del Ponte tried to open cases against senior KLA officers, but there was a lack of evidence. She mentions this many times in her book The Hunt: Me and the War Criminals (2008).

Former KLA leaders have not confirmed Del Ponte’s allegations against Kosovo’s political leaders in a book. Switzerland generally asked the author not to advertise the book because it harmed the famous Swiss neutrality. However, the former prosecutor’s suspicions prompted the Parliamentary Assembly of the Council of Europe to set up a special commission in 2008, headed by Dick Marty, to investigate war crimes against Serbs in Kosovo.

Marty made the final report in 2010, addressing it at a meeting of the Council of Europe. The document provided evidence of war crimes, which was confirmed by the prosecutor of the SITF of the European Union Rule of Law Mission in Kosovo (EULEX Kosovo).

The EU has decided that a more detailed investigation into the crimes mentioned in the Dick Marty report is needed. It was to occur within the framework of a special court that operated outside the self-proclaimed republic. The existence of such a tribunal agreed with the Kosovo authorities, which delayed amending the Constitution in the following years. In 2014, an active process of exchanging documents between the relevant Kosovo institutions and the EU on the emergence of a special court. Following the final agreement of details in 2014 in letters from the President of Kosovo and the EU High Representative for Foreign Affairs and Security Policy, in August 2015, the Kosovo Assembly voted to include 162 articles in the Kosovo Constitution.

Separately, the parliament voted for the Law on Specialized Chambers and Specialized Prosecutor’s Office, which became part of the judicial system of the self-proclaimed republic. These specialized institutions operate by the laws of Kosovo, norms, and provisions of customary international law and international human rights law.

The courts and the prosecutor’s office are not in Pristina but The Hague. The geographical factor is important in investigating crimes and conducting further trials of defendants so that judges and witnesses do not feel pressure from relatives, friends, former servicemen of the DEC, politicians, and the authorities of the partially recognized republic.

Specialized judicial chambers and specialized prosecutor’s offices differ from the ICTY in that they are not international judicial institutions. First, they are part of Kosovo’s national judiciary. Secondly, it operates by Kosovo law. The Constitution was amended, and the relevant law was approved.

There are also common features between the ICTY, the Specialized Judicial Chambers, and the Specialized Prosecutor’s Office. Funding is not provided by the Kosovo authorities but by the EU, the US, Canada, Turkey, and Switzerland. The Kosovo Judicial Council does not appoint judges. Chambers and prosecutors’ offices consist only of international judges, prosecutors, and staff from the EU, the US, Canada, and other partner countries.

It should emphasize that the institutions have a special mandate, jurisdiction, and temporary activities. They must cease their work when all cases concerning the accused have been completed. There are eight people in The Hague, Salim Mustafa, Hysni Gucati and Nasim Haradinaj (cases against them), Hashim Tachi, Pjeter Shala, Jakup Krasniqi, Rexhep Selimi, Kadri Veseli. Trials have begun against Salih Mustafa (September 2021), Husni Gukati, and Nasim Haradinaj (October 2021). Krasnichi, Selimi, and Veseli are defendants because cases against them are still pending.

The specialized courts and the specialized prosecutor’s office’s mandate is to investigate and prosecute for or against crimes against humanity, humanity, war crimes, etc., committed between 1 January 1998 and 31 December 2000 by or against Kosovo or the Federal Republic of Yugoslavia citizens.

The Kosovo authorities have declared their desire to join the EU since Serbia’s unilateral declaration of independence in February 2008. They have not actively cooperated with the courts and the prosecutor’s office. Although investigating war crimes and finding mass graves, finding out the fate of those who went missing in Kosovo in the late 1990s and early 2000s is key to the negotiation process with Serbia. The European Commission’s assessment of the effectiveness of Kosovo’s judicial system and its reform to EU standards also depends on this.

Kosovo had the experience of prosecuting war crimes suspects until 2016, when the Specialized Judicial Chambers and the Specialized Prosecutor’s Office officially announced. In 2005, the then Prime Minister of Kosovo, former KLA commander Ramush Haradinaj, was indicted by the ICTY Prosecutor’s Office for war crimes against Serbs, Roma, and Kosovo Albanians who collaborated with the Serbian military. Haradinaj voluntarily surrendered to the ICTY, emphasizing that he was innocent. Lahi Brahimaj and Idriz Balaj, Haradinaj’s closest allies in the KLA, came to The Hague with him. In 2008, a court acquitted Haradinaj and Balaj of 37 counts, and Brahimaj was sentenced to six years in prison for ill-treatment, violence, and violations of the rules and customs of war.

One month after the acquittals, the new ICTY prosecutor, Serge Brammertz, announced that the court’s decision had been overturned. In 2010, the prosecutor’s decision was upheld by the ICTY Appeals Chamber. The next trial of Haradinaj, Brahimaj, and Balaj took place in 2012, and they were fully acquitted.

Former Kosovo President Hashim Thaci, like Haradinaj, has surrendered voluntarily. Like other KLA members, he pleads not guilty, which the court must prove. A similar position is held by other defendants currently in The Hague.

Resolving this issue is important for Kosovo and Montenegro, Bosnia and Herzegovina, and Serbia, on the path to the EU. In each state, the accused were national heroes who fought for independence and defended their peoples.

In Kosovo, the Special Judicial Chambers and the Special Prosecutor’s Office are as irritating to society as the ICTY is to other post-Yugoslav republics. Kosovo Albanians believe that the tribunal was set up just for them, and Serbs will once again escape punishment for their crimes.

All this suggests that war crimes, war criminals, and trials continue to divide societies in the Western Balkans. The European Commission points to the problem of European integration because of this for the countries. However, the negotiations were frozen only for Serbia for a year (new chapters in the Association Agreement were not opened in 2020 due to a lack of progress in transitional justice). Kosovo, Montenegro, and BiH also do not have significant achievements in this direction, but working with them on possible accession to the EU has not stopped.

The article was published in Balkans in-site