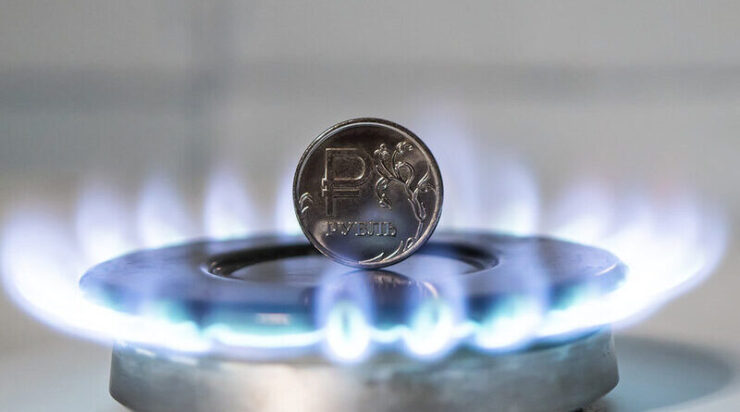 There’s been a lot of hand-wringing recently about Russia’s decision to insist on payment in roubles for its gas – and the abrupt decision to cut off deliveries to Bulgaria and Poland when their governments refused to go along with it. In fact the situation isn’t as dire as the hand-wringers have made out. But it’s an example of four general truths about Bulgaria’s situation:

A decade ago, I did an analysis of the Russian-linked political and geopolitical risks involved in building the proposed second nuclear power project in Bulgaria, Belene NPP. My conclusion was that Sofia was not in a position to mitigate these risks; and that joint projects should therefore be dropped whenever possible. A special report entitled “Belene NPP – Mission Impossible” was published, and I’m pleased to say that quite a lot of people still read it.

I mention this now for a reason. What applies to nuclear energy also applies with full force to natural gas and oil. And applies, not least, to the Nord Stream–1 and Turk Stream–2 pipelines.

The key conclusion of my report was that Russia’s energy projects carry an inordinately high risk because they are fundamentally and chronically vulnerable to political decisions taken at the highest level in Moscow. The rationale for such decisions is political, and has little or nothing to do with the calculations involved in any commercial transaction. The decision-maker is President Vladimir Putin. And he does not honour the independence of Russian commercial entities, considering them to be no more than tools or extensions of his policies.

Bulgaria’s National Electricity Company (NEK) knows this well. It paid, in full. the price of the two reactors of Belene NPP, plus the equipment accompanying them. Yet, six years later, these reactors are museum pieces. And monuments to the political myopia of successive Bulgarian governments.

Now, I tried to persuade former prime minister Boyko Borissov and successive energy ministers from his GERB party to consider selling this equipment – which seemed doomed to lie forever idle – to a third party, bundled with Bulgarian companies’ engineering services.

And, following the annexation of Crimea, it became brutally clear that Vladimir Putin would sacrifice any trade deal, regardless of size and importance, for his geopolitical ambitions.

But still my advice fell on deaf years, as Mr Borissov and his energy minister du jour, Temenuzhka Petkova, opted for an encore. They staged yet another comic double act aimed at attracting “strategic” investors. Which, predictably, failed.

By my reckoning, Bulgaria has already sunk over 3.6 billion leva in this ill-conceived and poorly executed nuclear “special operation”.

And now, talking of special operations, there’s Ukraine. The reactors delivered six years ago have lost much, if not all, of their value in the context of “Vladimir’s War”. There is now zero chance that Russian state nuclear company Rosatom will get off the sanctions list any time soon, Yet we can do nothing with these reactors without Rosatom. Of course, Bulgaria can still choose to retain these ‘assets’ on its balance sheets. It can refuse to write them off as losses, the way Western companies have written off their investments in Nord Stream-2. Maybe that’s what Bulgaria should do. But if not, it will just be denying reality.

Meanwhile, a Russia without Putin, a Russia returning to normalcy, does not seem very likely just now….

So let’s get real! Bulgaria needs to make an inventory and a detailed risk analysis of its trade and economic relations with Russia. Not just from moral outrage at what’s happening in Ukraine. But simply to get out of losing positions.

And not only out of unfinished projects, but also out of finished ones such as Turk Stream, where Russia has overplayed its gas cards and where transit revenues are not a certainty any more.

Bilateral gas relations are just as risk-prone as the relations involved in nuclear project. Why? Because the real CEO of Gazprom – and of other Russian gas firms, such as Novatek – is Mr Putin. He uses Gazprom as a powerful asset in his geostrategic games with Europe.

And, to return to our starting point, that’s how it is with the new requirement for payment in roubles. It reflects – and itself constitutes – an unmanageable political risk, The requirement is a unilateral decision, imposed upon business partners, that is driven by Mr Putin’s desire to stabilise the Russian national currency. Nor was the diktat preceded by any internal commercial-level decision at Gazprom. It came as a direct ultimatum from the Kremlin.

Ever since the days of the Grand Slam – the set of energy projects with Russia signed before Bulgaria entered the EU – I have been warning that Russian gas risk is unmanageable. Given this unmanageability, the fact that Bulgaria, even now, gets 94% of its gas from Gazprom is scary. And, given that this dependence is self-imposed, it’s little short of suicidal.

Now, against this general background of scariness and suicidal propensities, the good news is that, in itself and specifically, the rouble payments question probably shouldn’t worry us too much.  It is likely to be resolved sooner rather than later, simply because the Kremlin can ill afford to stop gas supplies to Germany. If it does so, Gazprom will have to make deep cuts in production. And once it does that, it will be extremely difficult for the company to resume gas production at pre-conflict levels.

Alternatives to sales of gas via pipelines to Europe are not going to be available in the near future. Thus:

In short, Mr Putin can’t do without gas sales for long. And, if he’s thinking rationally at all nowadays, he’s probably thinking even now of how he can lessen the impact of his ill-advised Ukrainian adventure on Europeans’ future demand. If it doesn’t bring them to their knees, cutting off Russian gas may force Europeans to find ways to do without it. Which, from Mr Putin’s standpoint, would not be clever.

So that’s the good news. But there’s bad news too.

…and the bad news

First, even the 6% of Bulgaria’s gas supply that isn’t supplied by Russia isn’t without its problems – and nor is the notion that this percentage can be effortlessly expanded. The main alternative at present is gas from Azerbaijan. But even importing Azeri gas has its political risks too. We should bear in mind the Nabucco pipeline legacy. The Kremlin’s pressure, coming via Baku and BP (formerly British Petroleum), blocked the entry of Azeri gas into Central and Eastern Europe (CEE). Even today, Azerbaijan has a high degree of political dependence on Moscow. It is hardly a coincidence that, as far as CEE is concerned, Azeri gas gets no further than Bulgaria. It doesn’t reach Ukraine, Serbia, Slovakia or Hungary. The story of former Bulgargaz CEO Nikolay Pavlov deliberately holding back from taking up Bulgaria’s full contractual quota of Azeri gas may be true as far as it goes. But it misses the critical point and the context in which that “self-restraint” makes sense – the context of concerted action between Moscow, Baku and Sofia in favour of Turk Stream.

Second, Mr Putin doesn’t play cricket. He plays the hardest of hardball. The Kremlin has made efforts to prevent the completion of IGB, theGas Interconnector Greece-Bulgaria, which will connect Komotini in Greece to the Bulgarian gas transmission system just south of Stara Zagora and thus make access both to Azeri gas and to LNG much simpler. There’s no earthly reason to believe that Mr Putin won’t continue to engage in provocative actions – even intensifying them as completion approaches. The counter-sanctions decree that he signed recently is another proof of his fixation on fighting back against the West, at least at a PR level. So let’s not be too quick to rejoice that IGB will soon be up and running and carrying natural gas. Maybe, as the project website says, IGB was 91% complete in April. But a lot can go wrong with the other 9%. Even sabotage is not out of the question. After all, the track record of competing pipelines in other countries being blown up is impressive.

Third, we’ve been worrying about gas, but there’s oil to consider too. It makes the Russian political risk factor even more worrying because Bulgaria’s only sizeable refinery, in Bourgas, is owned by Russia’s Lukoil. When EU sanctions against Russian crude come online, they will expose Bulgaria’s extreme vulnerabilities.

In line with its recent rather muted reaction to a legacy of transfer pricing, the Bulgarian government will very likely continue to shield the refinery and will seek exemptions from the EU oil sanctions against Russia in order to allow the refinery to continue processing Russian crude on “national energy security” grounds. The Kremlin will use this loophole to deny Bulgarian customers price discounts in line with the Urals-Brent spread, thus allowing Litasco – Lukoil’s 100%-owned but Geneva-headquartered international trading arm – to pocket a cool $100 million every month. And Mr Putin will make sure such gains end up in his war chest.

Again, it’s a classic case of high political risk. When business transactions are subordinate to the Kremlin’s political interests, you end up paying through the nose and becoming unpopular with your allies for letting the side down.

But it’s not as if nothing can be done about this. Look at Italy. The Italian market relies on Lukoil’s refinery in Sicily for nearly 20% of the fuels it consumes. Yet the Italian government has made public plans to take over operational control of the refinery to prevent imports of Russian crude and stop Russian geopolitical risk from spilling over into high fuel prices.

The Bulgarian government should do likewise. It should temporarily assume operational control of the Lukoil refinery in Bourgas, in order to mitigate the excessively high political risk of Litasco continuing transfer pricing and manipulating internal fuel market prices. This is a weak spot that the Kremlin continues to exploit in threatening to bring down any Bulgarian government it doesn’t like. So it would be in the government’s own interest to eliminate that weak spot, as well as the economic interest of Bulgaria’s citizens, and the interests of national stability and national sovereignty. It’s a no-brainer, one would have thought, and would take no more that a bit of political courage and a dash of gumption. So let’s see if it happens. And, if it doesn’t, let’s ask why.

Fourth and last, let’s mention an example of a serious political risk in bilateral economic relations that tends to be ignored. Namely, the risk to tourism. Sadly, Bulgarian hoteliers should forget about Russian tourists, at least in the short-to-medium term. Why? Well, it’s not that they have suddenly lost interest in Bulgarian summer and winter resorts. It’s rather that Mr Putin, in his frantic efforts at wartime crisis management, will further restrict outbound tourism from Russia to stop the currency drain and devaluation of the rouble. Currency controls are already in place. And incomes are collapsing. So it doesn’t take a Nobel Laureate to figure out that outbound tourism is going to suffer.

And what’s the moral of all that? Simple: the best policy toward Russia is uncannily similar to the policy of containment that worked against the coronavirus. Namely: isolation, distancing, avoidance, scaling-down and risk–management.

Mr Putin, with his surreally long conference table, would no doubt agree with the first three. Though his disastrous conduct of the war in Ukraine suggests that he isn’t terribly good at scaling things down or managing risk.

And, as to me, well, I hate to say “I told you so”, but… I told you so. My work and analysis on the political risks of doing business with Russia have been vindicated seven years after I was declared persona non grata by Russia. Though, God knows, I wish they hadn’t been vindicated. Not this way.

And though, on reflection, being declared persona non grata by Vladimir Putin may be the biggest compliment I’ve ever had.