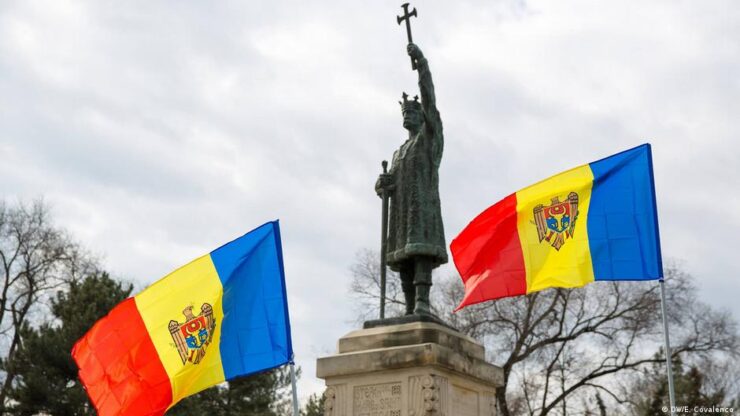 While Ukraine is fighting for its independence from Russian invaders, some neighboring countries act not the way Ukraine would like to see. Including Moldova.

There are many criticisms of Moldova, but not all of them are justified.

Kyiv and Chisinau have a lot in common. Both have Russian-occupied territories; both are now on their way to joining the EU; both lost a lot of time due to the pro-Russian “fifth column,” which was slowing down the development of the state by intensifying corruption.

However, the differences are even greater. Sometimes Ukraine’s expectations of its neighbors are wrong because Ukrainians know very little about them.

While in Ukraine many laws state that Crimea and CADLR are occupied, in Moldova the situation is fundamentally different. There are legal documents “for every taste” to confirm the Russian occupation and deny it.

It means that politicians if they wish, can choose any position.

But they choose “neutrality”.

In the last 30 years, the parliament of the Republic of Moldova has never made a decision recognizing Transnistria as an occupied territory!

The irony is that in 1991 when the Soviet Union still existed, the Moldovan parliament was bolder. It asked Moscow to “end the illegal occupation.” Today, Moldovan lawmakers, even pro-Western ones from the Sandu’s PAS party, are unable to make such a legal decision. The reasons for this are a separate issue, which we will explain further.

However, the fact that Russia is an occupier is legally enshrined in Moldova.

This is determined not by the decision of the parliament but by the Constitutional Court.

Since 2016, the Constitutional Court, which regulations are binding, has used the term “occupied territories” for Transnistria and has made a very detailed decision on the interpretation of Moldova’s “neutrality”. It states: that Moldova was also occupied during Soviet rule.

“Although according to the constitution the Republic of Moldova does not allow the deployment of armed forces of other states on its territory, during its Soviet occupation (1944-1991) and to this day, in the eastern part of the country are the occupying forces of the Russian Federation. In fact, in the eastern part of the country, the Soviet/Russian occupation never ceased, despite the Republic of Moldova’s declaration of independence,” states the Constitutional Court.

There is also a PACE political decision to recognize Transnistria as occupied.

Sandu’s party did not object to its adoption and voted in favor of the document.

Meanwhile, Russia has had the status of a “peacemaker” since the 1990s. Which is an absolute delusion. An occupier cannot be a peacemaker, by definition.

Ukraine is fighting for its Donbas. Why is Moldova so indecisive about Transnistria?

Ukraine often makes the mistake of comparing these occupations. There are too many differences.

Not a single Moldovan leader has publicly called Russia an occupier. Their voters will never forgive them. The main difference is that Donbas and Crimea were stolen after 23 years of independence. Independent Moldova, on the other hand, has never had control of Transnistria. Transnistrian separatists, relying on the 14th Soviet Army stationed in the region, came out of Chisinau’s control in 1990, before the collapse of the Union.

For more than 30 years since then, the willingness to fight for their land has fallen even more. Sometimes in Moldova, people even say: “Yes, let them separate if they want!” Nobody has the desire to divide Moldova.

The Transnistrian war turned out to have been very strange.

The bloody conflict took the lives of a thousand people in a short time. This is a lot for small Moldova

But it felt that its participants, especially the mobilized ones, did not need this war.

There were absurd situations when friends in the trenches faced each other, pretending to be at war during the day and sitting together in the evening. On the Kosnytsia bridgehead, for instance, (where active fighting took place) they laid an illegal telephone line between the positions to warn each other of upcoming danger.

Like, “we are going to attack soon, we are now firing into the air, and you hide. We shoot and say we could not take over you.”

Moldova is not considering a military way to liberate Transnistria. They will never go for it, and they will not ask Ukraine for help. This is impossible.

Firstly, Moldova has nothing to fight with.

President Sandu acknowledges that Moldova does not have a capable army. The defense minister disagreed with the radical statement but Sandu is right. Expenditures on the army have been the lowest in Europe for many years.

Secondly, the citizens of Moldova are against it.

The citizens of Moldova now have peace which is the most important for them. There is also no combat-ready army in Transnistria, including Russian units. According to Ukrainian intelligence, there are about 300 combat-ready soldiers with a dozen tanks and it is unknown whether their BM-21 Grad is operable.

The idea of Ukraine liberating Transnistria on its own is very dangerous.

In this case, for Chisinau and the citizens on both banks of the Dniester river, Ukraine will become an aggressor.

There is only one theoretical option when Ukraine can be asked to help and when it can act on that: if Russia breaks through a land corridor to Transnistria, brings a large number of weapons, and threatens to take over Chisinau. But this is unrealistic.

One of the bases of Transnistria’s economy is the free gas from Gazprom. Tiraspol consumes this gas in debt (as of today over $ 7 billion).

Meanwhile, Moscow does not even ask Chisinau to pay and continues to supply without payments. If Chisinau decides to overthrow the occupants and unite with Moldova, Moscow could blackmail Chisinau.

However, Moldova had no choice but to buy gas from Russia via Transnistria.

Only now a gas pipeline from Romania and supplies from Ukraine have become available.

Can Gagauzia become a new Transnistria?

Gagauzia is an autonomous territorial unit in the south of Moldova. Gagauz is a Turkic ethnic group that historically lives in Bessarabia. Under Stalin, the Gagauz people were persecuted and repressed as “enemies of the people. “Nevertheless, the Gagauz are now in the realm of Russian propaganda. They work in Russia, watch Russian television, and live by the myths of this propaganda.

In 1992, Gagauzia could repeat Transnistria’s fate and start a conflict with the center. Only the lack of the Russian army in the region saved it from another Moldovan war. And secondly, they saw the consequences of the war in Transnistria and realized that they did not need all of that.

The main language of their office administration is Russian, they have their own “constitution”, a mini-parliament, the People’s Assembly of Gagauzia, and a mini-president – Başkan.

This autonomy, where pro-Russian forces retain power, sometimes begins to believe that it does not have enough power. Local authorities recently announced that they would not comply with some Moldovan laws.

There is no separate Moldovan language. It is an artificial name created during the Soviet occupation to separate Eastern Moldovans who found themselves within the borders of the USSR from Western ones.

The Soviet Moldavian Republic directly transitted the Romanian language into Cyrillic and called it “the Moldavian language.” Back in 1989, in the last years of the Union’s existence, Chisinau returned to Latin and renamed the language Romanian. Under this name, it is written in the declarations of Moldova’s independence. In schools, children learn also Romanian.

However, for some Moldovans, the name of the language is a painful issue.

Some pro-Russian politicians demand that the language be called “Moldovan”.

Besides, the name “Moldova” means not only the country but also a large macro-region, most of which is located in Romania. And until the middle of the XIX century, there was also a separate state, the Moldavian principality.

Many citizens of the Republic of Moldova now insist that they are part of the Romanian nation and, for example, in schools they study “History of Romanians.”

However, a national consensus on this issue is yet to be found. Therefore, the dispute over national identity further complicates the situation.

Why don’t they unite with Romania?

Many countries in the world do not have a monopoly on their language. No one questions that Austria is a German-speaking but separate state. The same applies to Moldova. This issue can be considered only by its citizens.

The idea of ​​uniting Moldova and Romania has been under discussion since the early 1990s. It is called “Unirea”, ie “union”, but even among Romanians in Moldova, they cannot agree on whether to unite with Romania. For various reasons.

Someone considers the principle “one nation – two states” to be correct.

Someone argues about the national identity of Moldovans.

Some say that Moldova, with a large minority of Gagauz, Russians, Ukrainians, etc., finds it very difficult to integrate into Romania.

Some say that this threatens the integrity of the state. For example, it is difficult to explain to a pro-Russian Gagauz that they have to “become Romanians” and “join NATO”.