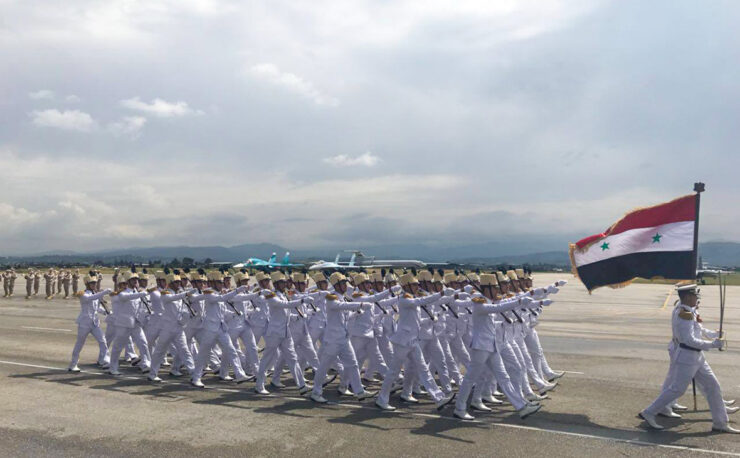 From Syria to Ukraine: parallels in Russian warfare

Volodymyr Solovian on the possibility of Russia’s use of mercenaries and the redeployment of its military contingent from Syria to the war in Ukraine.

Russia’s military tactics in Ukraine and Syria are strikingly similar. Ukraine in Flames #68 compares and contrasts the two campaigns.

Syrian mercenaries in Ukraine – another fake story from the Kremlin?

Back in early February, reports appeared that PMC Wagner was recruiting Syrian mercenaries to take part in the war in Ukraine. Russia has used Syrian mercenaries in various theaters of war in Libya, Mali, the CAR and even Venezuela, so this practice was not unexpected.

On the background of 190,000 Russian troops near the Ukrainian border, the factor of mercenary participation was not significant.

The situation has changed dramatically after the first weeks of full-scale war, when Russian troops suffered heavy losses. The Russian command became short on troops and is looking to get manpower.

Then Moscow announced plans to send 16,000 so called volunteers from Syria to the war zone.

However, such a statement seemed rather speculative. At first, there are much less well-trained fighters under command of Damascus. For example, the most capable 25th Special Mission Forces Division, which is trained by Russian military instructors, has about 4,000 fighters. The rest of the potential Syrian mercenaries will not be a serious combat unit in Ukraine. They lack military discipline, they are unfamiliar with the Ukrainian landscape and geography. Moreover coordination with Russian soldiers will be too complicated because of the language barrier. Additionally, the intensity of the war in Ukraine exceeds the experience of the Syrians, so their morale will be low.

But the main problem for the use of mercenaries from remote regions is logistics. Although the training of a mercenary is cheaper than that of a contract soldier, considerable effort is required to deliver a sufficient contingent from Syria.

The situation has become especially difficult for Russia since Turkey and Azerbaijan closed off their airspace to Russian military flights.

As a result, there is currently no reliable information on the use of Syrian mercenaries in the battlefield in Ukraine.

Therefore, I consider the issue of Syrian mercenaries as an informational and psychological operation aimed at intimidating Ukrainian society as well as attempt to counterbalance media coverage of the International Legion of Territorial Defense of Ukraine activities.

How many soldiers Russia is ready to withdraw from Syria and send them to the frontline in Ukraine?

We do not have accurate data on the size of the Russian contingent in Syria. However, it should be noted that most Russian servicemen belong to the air forces and air defense system or operate at the naval base in Tartus. Instead, Russian needs infantry units to keep its advance in Ukraine.

According to my estimates, Russia will be able to deploy in Ukraine up to 3,000 troops from Syria.

By the way, in the military parade dedicated to the Victory Day, which took place at the Khmeimim Air Base, Russian motorized infantry, marines, airborne troops and military police units took part. Thus, it can be argued that the Russian base in Syria has not emptied, as it was depicted in a number of media.

What will be the consequences of Putin’s gamble in Ukraine for the Middle East?

The presence of the Russian Armed Forces in Syria is a long-term investment.  I do not think that Putin is ready to sacrifice his achievements in the Middle East at this stage of the war in Ukraine.

Turkey’s decision to close the Bosporus and Dardanelles for Russian warships that are not part of the Black Sea Fleet complicates a maritime presence in the Eastern Mediterranean for Russia. However, in the near future, Russia will not reduce its activities off the coast of Syria, because it’s seaforces there have a more anti-ship focus and are tying up significant NATO forces.

It is also unlikely that Russia will withdraw aircraft and air defense divisions, as it does not feel the lack of these types of weapon in Ukraine. At the same time, without the support of Russian aviation, Bashar al-Assad’s forces will lose a key advantage in the confrontation with anti-Turkish proxies and fragile status quo will be destroyed.

However, Russia’s weakening on the ground may launch another split of regional alliances.

Official Damascus will continue to rely on Iran. This is confirmed by the recent visit of Bashar Assad to Tehran, which took place for the first time in 3 years.

There, the Syrian met with Supreme leader Ayatollah Ali Khamenei and President Ebrahim Raisi. So in the coming months, activity of the Islamic Revolutionary Guard Corps and the militant group Hezbollah in Syria will intensify. This means that Israel, despite the recent diplomatic scandal caused by Minister Lavrov’s anti-Semitic remarks, will continue acting in a discreet manner in relations with Moscow, which still keeps considerable influence over the Syrian regime.

Another consequence of the weakening of Russia’s position may be intensification of Turkey’s offensive against Kurdish forces in the northern parts of Syria, which are in alliance with Damascus since 2018.