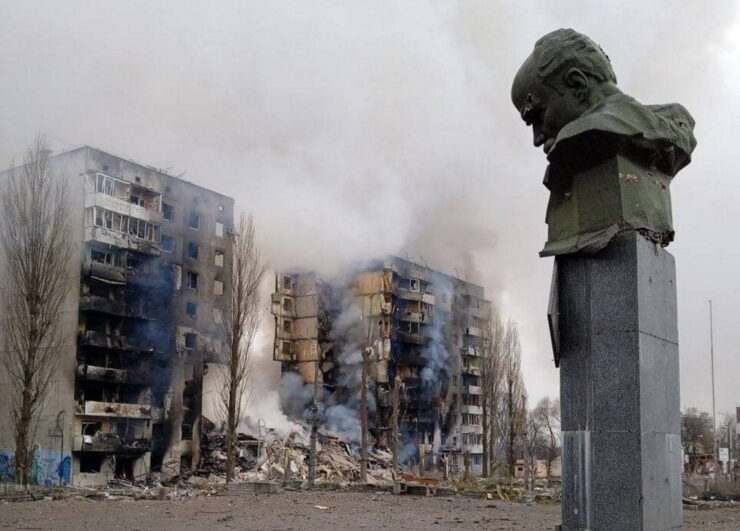 The Illusion of Compromise

Concessions to Russia Proposed by the NYT Will Defeat the West

At a time when the world is experiencing the greatest security crisis since World War II, when a nuclear power and a permanent member of the UN Security Council is waging a regional war in Ukraine and does not hide its desire to extend its aggression (which Moscow calls “expansion of its sphere of influence”) to other states.

But there is another challenge on a way to fight the tyrant.

In recent days, several Western opinion leaders and politicians have written publications and statements that share a common theme. They seek to mollify Putin by partially satisfying his appetites, at the expense of Ukraine and Ukrainians. They call for a “small” sacrifice which would save the world from “a big threat”.

The New York Times editorial The War in Ukraine Is Getting Complicated, and America Isn’t Ready, sparked a lot of emotion last week in Kyiv, Washington, Berlin and other European and US cities. Both European politicians (such as the Italian government) and American politicians (such as former Secretary of State Henry Kissinger) published similar thoughts. The NYT article was the most resonant.

The NYT editors emphasize that they are in no way “trying to appease the aggressor”, they assure readers that they support Ukraine, and emphasize the importance of the struggle for freedom. Then, they offer the exact opposite.

Ignoring all that was said at the beginning, the NYT editorial board offers to give Putin what he wants.

They argue that it is simply impossible to defeat Russia and restore Ukraine’s territorial integrity. That is why they call on the White House and the West to prepare Ukraine for loss. To do this, they demand that Biden warn Zelensky that armed support will be limited. “This is what governments are obliged to do, not pursue the illusory victory (of Ukraine in the war),” the article said.”Confronting this reality can be painful,” the authors add, probably unaware of how far from reality their proposals are.

First, let’s emphasize we are not naive.

Ukrainska Pravda and European Pravda have been covering international politics for many years; we know how cynical it is. There is no place for altruism, and the role of values ​​is incomparably less than in public speeches. When the governments of the United States, Germany, France, Britain, Italy, etc. are concerned about global security, they are guided by their own interests, because they benefit from the stability of the world economy.

However, forcing Ukraine to be defeated in the war will harm them strategically.

We insist it is a matter of defeat.

The loss of part of the territories cannot be called otherwise. Regardless of how the formula is disguised.

There is a consensus in Ukrainian society that the only way for victory is to restore Ukraine’s territorial integrity, including Donbas and Crimea. The same opinion is publicly held by the Ukrainian government, as well as the military. All other options will mean either that the war is not over yet, or that Ukraine has been defeated.

Ukraine’s stance on this matter is the key to determine how other countries will interpret the outcome of the war. It doesn’t matter what the White House says, if the Ukrainian people see themselves defeated.

In the end, the United States have raised the importance of countering Putin when they’ve to call the US aid to Ukraine a Lend-Lease, similar to World War II-era aid. Would President Roosevelt come to an agreement with Hitler by offering for Germany to keep a part of captured Europe? But that is exactly what President Biden is advised to do!

The Kremlin will also do its utmost to make the world aware of its victory in a war with NATO and Ukraine.

It is worth emphasizing even though the Ukrainian army is waging war against an aggressor; with the West only (and often reluctantly) provides support; many people around the world think otherwise. They see this as a war between Russia and NATO. Ukraine’s defeat will be perceived as a defeat for NATO, and in particular the United States.

You can turn a blind eye to this and deny it, but it does not change the reality, especially in countries where there are strong positions of anti-Western propaganda, including Russian and Chinese one. If the US government decides to take the step advised by the NYT, it will damage the credibility of the United States and the West in countries where society has not decided on the direction of its development.

The question from them will sound harsh:

“What’s the point of fighting for democracy and Western values ​​if the West has betrayed even Ukraine?”

Twice in this century, Ukrainians have revolted for their democratic future. Now they are resisting military aggression by the former empire, which wants to destroy Ukraine as an independent state, and has declared its intention to stop Ukraine’s westward movement.

If in the end the West forces Ukraine to sacrifice territory to Russia, how will it ever convince other states to support democracy? You will not find the answer to this, it does not exist. The jump in skepticism about the US, the EU and NATO will be inevitable in many countries, including in Europe.

The loss of international influence inevitably leads to problems in international trade, energy and so on because foreign policy has a way of coming home.Another dimension that pushes the NYT into the abyss is security.

Russia will be significantly weakened and, if tough sanctions are maintained, may refrain from new aggressive actions for a significant period. But this will not last forever.

Concessions will not bring the “peace for our time” Chamberlain once mistakenly predicted by signing a peace treaty with Hitler. The feeling of impunity will be decisive for further tyranny, even after Putin leaves. The only question is when the next attack will take place and who will be its target – Moldova, Georgia, Ukraine again or someone else. NATO countries are not exempt – there are threats to Poland and the Baltic states.

The occupied Crimea has become a military base for Putin, from which he launches missiles across Ukraine. Later, he can use it to attack other countries in the region, too.

If concessions are made, Russia will know that it can gain new territories and go unpunished because the West fears it. Economically, Russia has nothing to lose – it is still in isolation and under the harshest sanctions in history.

Russia is not the only country in the world that dreams of attacking another country. It is difficult to imagine a louder invitation for Chinese aggression against Taiwan than recognizing Russia’s land grab.

There are other problems for the United States and the West in this case.

The global food Crisis could worsen. Ukraine’s defeat at this stage of the war will not bring lasting peace with Russia, it will only freeze the conflict. It is unlikely that Ukraine will receive guaranteed safe access to the Black Sea, the main export route for Ukrainian grain. Russia has mined the Black Sea to block Ukrainian ports. In peacetime, demining would take several months to a year. By retaining the occupied territories and controlling the sea, Moscow could delay the process for many years.

It will also increase the direct spending of Western donors, the United States, and the EU to help rebuild Ukraine. The fact is that effective cost reduction requires two components at once. The first is democratic control over spending. However, Western coercion of Ukraine into defeat will not promote respect for democratic institutions. The second condition is investors who will revive the economy. But will many investors go to a country whose security is so easily sacrificed by the West? Will they be willing to invest here, realizing that peace is temporary and uncertain?This is not a complete list of problems. Compounded these problems will destroy the remnants of the global security system, which is for now dominated by the West.

Fortunately, many Western politicians understand these challenges. They understand that the West needs to support Ukraine and a Ukrainian victory no less than Kyiv.

It should also be emphasized: in the end, Ukraine will decide for itself what to consider its tactical victory. Should we stop for a while before restoring full territorial integrity, or should we go to the end. Do we need to reconquer Crimea now, or do we need to take a break and return it later?

Ukraine is already discussing this. For us, unlike Russia, the lives of our military and civilians are important.

But this is and must be Ukraine’s decision. Because if the West tries to impose it, by limiting aid, or other means, it will lead to catastrophe.

And neither Ukraine, nor the United States, nor Germany, nor France, nor the Italian government, nor the editors of The New York Times need that.

This is a joint editorial article

by the European Pravda, and Ukrainska Pravda

Was originally published at European Pravda