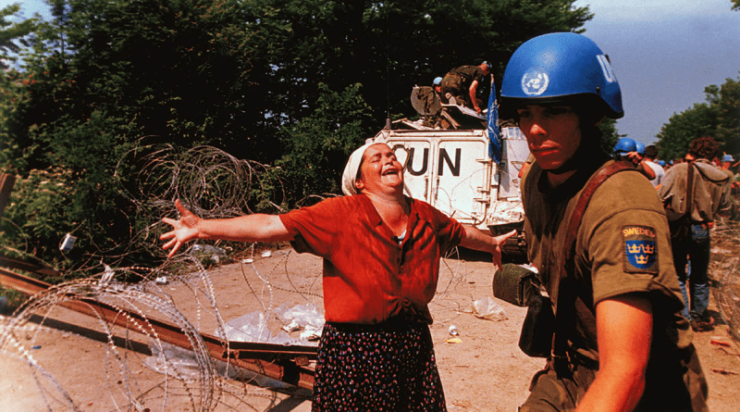 Mass killings of civilians in Russia’s war against Ukraine and reports of mass burials and torture make us think of war crimes committed in the former Yugoslavia in the 1990s and early 2000s. At that time, information about human rights violations, the death of civilians, and concentration camps were not spread as fast as it is now.  After the end of the war, the international community repeated: “Never Again.” A similar phrase was uttered after the end of the Second World War. History repeats itself and shows that crimes against civilians continue to be the norm in any war.

A characteristic feature of genocide is that, as a rule, its commission is purposeful and organized. While “ethnic cleansing” is largely the result of military operations to retake certain territories, mass killings and burials result from hostage-taking and their physical destruction through emotional and personal attitudes.

There are versions among Yugoslav experts and tribunal staff that several acts of genocide were committed during the Balkan crisis. However, ICTY investigators, after a thorough investigation as of the end of 2015, proved that the only case of this crime took place in the town of Srebrenica (Bosnia and Herzegovina). The prosecutor’s office of the tribunal continues to study the facts of possible genocide in the village of Racak (Kosovo) and the Republika Srpska (Croatia), etc.

The genocide can be best illustrated by the events in Srebrenica, which were fought between Serbs and Bosnian Muslims between July and August 1995. However, the city and its neighboring settlements were declared demilitarized zones. In July 1995, under the command of General R. Mladic, the Serbs launched a decisive offensive. During interrogations at the ICTY, the general said that before the army entered the city, he suggested that Muslims be evacuated. Therefore, all comers were taken under the control of the Dutch UN battalion to Tuzla.

However, tribunal investigators proved that Mladic had ordered the extermination of the entire male population of Srebrenica, for which ICTY judges charged him with organizing and committing genocide.

According to various estimates, Bosnian Serb troops killed between 7,000 and 8,000 Muslim men and boys aged 13 to 65. The UN Security Council condemned the Serb attack on Srebrenica in Resolution 1004 of July 12, 1995. The events in Srebrenica culminated in the tragedy in Bosnia and Herzegovina. During the 2000s, international and Bosnian forensic experts worked to exhume bodies belonging to Srebrenica Muslims. Every year on July 11, the reburial of the identified remains is held in the Memorial Complex in Potocari.

Another, more common crimes were ethnic cleansing, which was used by all parties to inter-ethnic conflicts. Campaigns to clean up the territory from certain ethnic groups were the most brutal tool in the political struggle for their state.

Serbs carried out ethnic cleansing against Muslims and Croats in Bosnia and Herzegovina, and Croatia (1992-1995). Thus, the most famous places of such campaigns were the cities of Vukovar, Dubrovnik, Autonomous Region Krajina, and Serbian Autonomous Region of Western Slavonia. The actions of the Serbs were widespread, as virtually all Bosniaks and Croats in the territories were deported, ethnically abused, or killed.

The long blockade (August 25-November 18, 1991) of the Croatian city of Vukovar should be mentioned separately. As a result of shelling by Serbian artillery, the city was almost destroyed. Vukovar was captured due to the assault, and many of its defenders were killed and buried in mass graves. In addition, Serbs killed not only residents of Vukovar itself. The victims of the general anti-Croatian campaign of”ethnic cleansing were 264 sick servicemen who were treated at the Vukovar hospital.

The Albanian and Serbian military carried out ethnic cleansing in Kosovo. At the same time, such campaigns have become particularly widespread in the central and southern regions. The crisis in Kosovo provoked ethnic protests in Macedonia in early 2001. The most conflict-ridden area was the northern part of the country, which was in the cities of Gostivar, Kumanovo, Skopje, and Tetovo, the Macedonian population, fell victim to Albanian terrorists.

Regular military units and territorial self-defense units, and the police took part in the “ethnic cleansing.” The main methods of such campaigns were: beatings, interrogations, deportations of large groups to concentration camps and places of detention, creating an artificial atmosphere of fear, and unauthorized killings.

Other war crimes, such as mass killings and burials, were closely linked to ethnic cleansing. Mass executions took place during the purification of territories from a specific ethnic group or due to the physical destruction of prisoners. Mass killings of civilians are one of the main points of the ICTY’s charges against war criminals. The indictment documents contain detailed information on the number of killed, their names and surnames, and places of death. Also described are the most striking episodes that testify to mass murder. People were killed in different places: in their own homes, on bridges across rivers, and then bodies were dumped into the water, in warehouses, UNA factories, or barracks. The detainees were subjected to violence, “beatings with wooden sticks and legs.” Many victims died or were seriously injured as a result of the abuse.

The dead were buried in mass graves located in remote areas. This was done to reduce the scale of crime and hide from international observers the actual number of civilian casualties. The search for and study of mass graves began during the active hostilities in Bosnia and Herzegovina, and Croatia in the 1990s and continues to this day. Such burials are located quite unevenly in the former Yugoslav republics. The most significant forensic experts are in Bosnia and Herzegovina and slightly fewer in Croatia and Kosovo. The study of burials is complicated because some of them are secondary or tertiary – that is, the remains of victims during the conflict were hidden several times. Burial places were not only earthen graves but also mines, wells, rivers, lakes, and mountains.

Ethnic cleansing, acts of genocide, and killings accompanied sexual violence against civilians. According to documents from the UN Commission of Experts, ICTY indictments, and reports from EU missions, the abuse of women of all ages was particularly widespread. However, boys and men were subjected to similar abuse. The documents of these organizations show that the following forms of sexual violence were general: slavery, rape, and physical abuse. The crimes were spontaneous (during hostilities, deportations, before killings) and organized. Representatives of international and European organizations noted the existence of brothels, special camps for women, and small centers in all former Yugoslav republics. They were created in hotels, restaurants, schools, etc.

Note that some factors complicate the study of this type of crime: victims refuse to testify because of fear and psychological trauma; doctors and psychologists who have worked with victims cannot provide documents because of their confidentiality; the topic of sexual violence is a kind of taboo in post-Yugoslav societies. In the 2010s, thanks to the efforts of local NGOs, information on crimes began to be collected, but this issue needs to be investigated separately.

Article was published in Balkans in Site