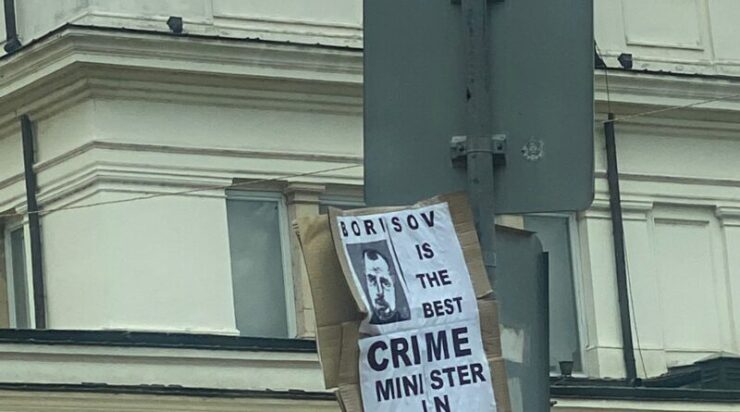 The overthrow of Kiril Petkov’s government can hardly be called unexpected. There has been a  time bomb within the governing coalition. it’s the “ITN” party of showman Slavi Trifonov, one of the less appealing former comedians active nowadays on the world political stage. That time-bomb had been ticking for a long time. And finally it has exploded.

There is such a coalition!

“ITN” stands for “Ima Takuv Narod!”, or “There is such a people!” (Parties that have sentences for names are much in vogue nowadays in Bulgaria.) It’s a semi-joking reference to a statement of that notable phrasemonger Vladimir Lenin, back in 1917 during the Russian revolution. When a social democratic leader said in parliament that there was no party in Russia prepared to take power into its own hands, Lenin declared loudly “There is such a party!” He meant his own party, the Bolsheviks (the future Communists). And unfortunately he turned out to be right.

Fast-forward 102 years and the amusing Mr Trifonov chose to adapt Lenin’s phrase to express the claim that the Bulgarian people could, through his party, do the job of clearing up the accumulated corruption of the post-communist period and in particular of the era of Boyko Borissov, the former bodyguard and police minister who had founded GERB (Citizens for the Democratic Development of Bulgaria).

Having served as prime minister from 2009 to 2013 and again from 2014 to 2021, Mr Borissov was finally evicted from power in April 2021 by a rebellion in which Mr Trifonov’s party figured prominently. In fact, ITN emerged as the largest party in parliament in the first of the three elections in 2021 that were required before a precarious government could be cobbled together from Bulgaria’s fragmented political forces.

Now, Mr Trifonov’s Leninist echo was appropriate in a way he probably didn’t intend. For ITN is a formation anchored an interconnected network of Communist-era security-service personnel, and has the remains of the old Multigroup conglomerate at its centre.

Bulgarian politics since 1989 can largely be seen in terms of the rise and fall, the rivalries and interconnections of various economic groupings – and, to a limited extent, of attempts to counter them – and Multigroup had been the dominant economic grouping in the 1990s, severely damaged but by no means destroyed by the assassination of its boss, former wrestler and security operative Ilia Pavlov in 2003.

ITN apart, the coalition government was a mixed bunch. It was led by Kiril Petkov, co-founder with Assen Vassilev of the progressive, if somewhat naïve, reformist and anti-corruption party Produlzhavame promyanata (PP), or“We Continue The Change” (see what I mean about sentences?). It also contained the more straightforwardly right-of-centre reformist coalition Democratic Bulgaria (DB). But it also featured a very surprising bedfellow, the Bulgarian Socialist Party (BSP). Successor to the pre-1990 ruling Communist Party, it’s a notably Russophile formation. And arguably also, notably Putinophile. So we’re back to the Vladimirs….

….and now there isn’t

However, to return to the Petkov government’s fall… Apart from fundamental incoherence, the government certainly had flaws for which it can legitimately be criticised. These were mostly a matter of two things. First, of underestimating the gravity of a crisis-ridden situation. And, second, of a lack of focus and prioritisation within an agenda that was inevitably suffering from overstretch because it was striving both to implement reforms and to deal with several crises at once.

However, these have little to do with the real reasons for the collapse. In fact, what happened on the surface doesn’t by itself make much sense.

ITN pulled its ministers out of the coalition cabinet citing two reasons. First, there was an alleged ‘betrayal’ on the part of prime minister (PM) Petkov, who had promised EU officials to drop Bulgaria’s veto on the start of negotiations for membership of North Macedonia in the Union. Second, there was the refusal of Mr Petkov and of deputy PM, finance minister and PP colleague Assen Vassilev, to honour a €2 billion demand for additional funds by the Minister of Regional Development and Public Works – another deputy PM, the ITN-aligned Grozdan Karadjov.

The withdrawal was followed by the no-confidence vote, which was tabled by the opposition GERB party, and cited shortcomings in governance and the budget, as well as excessive debt. But none of these nominal reasons were given the slightest credibility during the ensuing debate on the no-confidence vote and can be seen as matters more of form than of substance. In fact, the opposition rushed to bring down the government almost as if it were acting on a time-sensitive assignment decreed by some extra-parliamentary command-and-control centre.

Which it probably was.

For the thing to remember about Bulgaria’s parties, parliament and politics is that they largely work by remote control. The country’s parliament features an array of remote-controlled parties that is quite unparalleled in Europe, if not the world.

For example, GERB’s members of parliament (MPs) receive instructions on voting from ex-prime minister Boyko Borissov, who at present is not himself an MP.

The parliamentarians of the mainly ethnic-Turkish Movement for Rights and Freedoms (DPS) usually get orders from either or both of Ahmed Dogan and Delyan Peevsky. The former, who founded the DPS three decades ago, is “honorary” party chairman and hasn’t been an MP since his ostensible retirement in 2013. The latter, a businessman of less than savoury reputation – and, incidentally, sanctioned by the US under the “Magnitsky Act” – is an MP but does not bother to participate in parliamentary work (any more, as it happens, than Mr Dogan had done before 2013!).

As to ITN’s MPs, they are coached from afar by their leader Slavi Trifonov and by the party’s equivalent of Peevsky – the oligarch Orlin Alexiev.

All this being so, there’s a lot of room for guesswork about behind-the-scenes deals and foreign interference – mainly from Moscow.

So what is the explanation of the fall of Mr Petkov’s government? Well, there are many explanations. The main one, of course, is that he didn’t have enough parliamentary support, which de facto made him dependent on the Trojan horse in his coalition.

But why did that potential translate into an actual defeat in the no-confidence vote? I think there are two main reasons.

The first, and most important, was that certain fundamental features of the post-communist dispensation were under threat and something had to be done about it quickly.

As we’ve discussed before, during the transition – or possibly “transition” – GERB and the DPS, as the twin pivots of the oligarchic-corruption model imported from Russia, had succeeded in building unofficial networks of influence and control over the legislature, the executive branch, the judiciary and the media that required substantial and repeated financial injections to sustain their viability.

When the Petkov government – headed by genuine anti-corruption reformers – attempted to cut off their access to public funds and procurement, the Remote Controllers issued the order to overthrow the government as the critical cash pipeline that connected them to the budget was imperilled.

A particularly telling example was the ‘private’ customs control checkpoint at Captain Andreevo, on Turkey’s border with Bulgaria (and therefore the EU). That, not to put too fine a point on it, was organised-crime business with the highest level of political protection) at the EU Bulgarian-Turkish border. When the no-confidence vote went through, the government was eagerly awaiting the arrival of  German customs officials to start work at the checkpoint. It was only just in time. And the vote went through by just three votes. But it was enough.

The second reason concerns gas. The vote of no-confidence occurred in the wake of gas supply cuts carried out by Russia and its national gas firm Gazprom – and, in all likelihood, conducted in coordination with the same GERB-DPS group that was implicated in the overthrow of the government. Suddenly turning off the gas like that was a punitive move meant to cause social tension and to expose the government’s inadequacy in identifying alternatives to the country’s inherited 95% dependence on Russian gas.

But, alas for the plotters, the scheme didn’t work.

Thanks to the help of the European Commission (EC) and the US, sufficient quantities of gas – mostly liquefied natural gas (LNG) – were secured to meet immediate demand. Worst for all for Russia, the real prospect of Bulgaria not renewing its natural gas supply contract with Gazprom, which expires at the end of 2022, loomed large, as Russian political risk became untenable. In effect, prime minister Petkov called Mr Putin’s gas bluff and exposed the long-held fallacy that Russian gas was indispensable. With long-term contracts for the supply of Azeri gas and LNG, the real prospect of Gazprom queuing up to compete for a small share in the Bulgarian gas market emerged as an imminent prospect.

That was scary, and not only for Gazprom. For its gas flows are the origins of substantial cash backflows oiling wheels of corruption in Bulgaria and funding Russian influence and the Kremlin’s fifth column in the country. Understandably, the beneficiaries are reluctant to lose the benefits. A congenial government may yet be able to throw a spanner in the works. Which is another reason why that vote of no-confidence succeeded.

So what now? Well a new Petkov-led (or PP-dominated) cabinet seems unlikely. Another government of any description is also unlikely within this parliament. So another parliament-based government would probably require not just elections (time-consuming), but decisive elections (implausible). Therefore the next government is most likely to be a caretaker government, possibly quite a long-lived one, appointed – as prescribed in the constitution – by the country’s President, Rumen Radev.

Which would be very handy for the Kremlin, since Mr Radev is notably pro-Russian. And since he would have an excuse to take ‘remedial’ steps and renew the contracts with Gazprom even at the cost of violating EU sanctions. He would plead an “energy security emergency”: winter is coming, the level of gas in Bulgaria’s storage facilities is low, and we need gas. Admittedly, that wouldn’t be a terribly good excuse, in view of the LNG and pipeline alternatives now on offer. But it would be enough for Mr Radev.

Meanwhile, the fight is on. Gazprom-linked proxies have so far succeeded in blocking a long-term LNG supply contract with a US company, fearing that there will be no market niche left for Russian gas if this is signed. And Mr Radev is running true to form. He has openly opposed the supply of Bulgarian armaments and ammunition via third countries to Ukraine.  He was also one of those accusing  Mr Petkov of “betrayal” for promising EU Neighbourhood and Enlargement Commissioner Oliver Varhelyi that Bulgaria would lift the veto on starting accession talks with the Republic of North Macedonia before France’s presidency of the EU ends on June 30.

These positions taken by Mr Radev remind us of his increased role in blocking the integration process in the Western Balkans and of Russian pressure to neutralise Bulgarian support for Ukraine at an even more crucial time. Under a caretaker government formed by the president, Bulgaria could sharply reduce its contribution to the joint NATO and EU efforts to support Ukraine.

To conclude, the parliamentary coup that brought down Kiril Petkov’s government involved the coordination of a range of very disparate forces – from radical nationalists and Russophiles to centrists and right-of-centre populists. And these had an array of individual and specific reasons for acting, including political rivalries, both traditional and new, between government and opposition. But there’s just one common denominator that unites these forces, and that’s corruption – a shared interest in two interconnected things. Namely: first, control over €6 billion in EU funds; and, second, the rewards accruing from participating in the defence, promotion and servicing of Russia’s interests, both in energy contracts and in Ukraine. Those are the factors that have really been decisive. And it’s Russia that – not for the first time – has been acting as arbiter and organiser in Bulgarian politics.