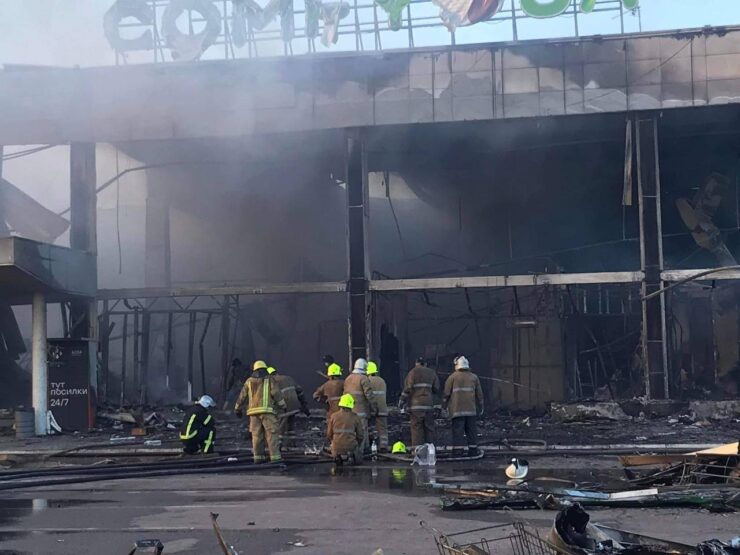 Yesterday, in the middle of midday, Russia committed another crime against humanity in Ukraine: it launched a missile attack on a shopping center in the city of Kremenchuk, in which there were a lot of civilians. A few days earlier, the US Senate Committee adopted a resolution recognizing Russia as a state sponsor of terrorism. The decision is correct and in fact – more than overripe. At the same time, given what modern Russia has become and how it behaves in the world, it is more appropriate to define it not as a sponsor of terrorism, but as a terrorist state.

In the early Sunday morning of June 26, Russian troops launched a missile attack on a 9-story building and a kindergarten in one of the central districts of Kyiv. As a result of the shelling, one person was killed, and six others, including one child, were injured to varying degrees.

The next day, on Monday, June 27, Russian Tu-22 bombers fired two missiles at a shopping center in Kremenchuk. The blow was dealt in the middle of the day when there were more than a thousand people inside the building. A large-scale fire broke out at the site of the tragedy. At the moment, at least 20 people have died and 59 are being treated in hospital.

“The number of victims is unimaginable. No danger to the Russian army. No strategic value,” President Zelensky reacted to the shelling of Kremenchuk. On the one hand, one can agree with him: why to bomb a shopping center, which is can hardly be suspected as a military facility and in which the main “manpower” is mothers with children. However, on the other hand, there is certainly value for the Kremlin in these strikes. Otherwise, they would not have been made. The shelling of Kyiv, Kremenchuk, and other cities was carried out during the G-7 summit and is a kind of response from the Kremlin to the decisions taken there regarding the continuation of supporting Ukraine and increasing pressure on Russia. It is also a signal before the NATO summit in Madrid, where Russia is planned to be declared a strategic threat to international security and the existing world order. This is also a response to the US decision to purchase an advanced NASAMS missile defense system for Ukraine. This is also the Kremlin’s response to the Ukrainian army’s strikes on the command posts of the Russian troops using precision Western weapons, in particular, HIMARS systems, as well as to several successful operations of eliminating the representatives of the occupying authorities in the territories temporarily occupied by Russia in recent days.

Thus, the Kremlin decided to bolster with “practical actions” its statements that if the West not only continues but also increases military support for Ukraine, then “Russia will begin to strike at those objects that it has not yet struck.” Many believed that this could be related to the government quarter in Kyiv, critical infrastructure, strategically important lines of communication, etc. But no. Russia hits exactly the places of accumulation of the civilian population.

There can be only one adequate response to such actions by Russia: supplying Ukraine with even more weapons as soon as possible, and firstly with those that could prevent the aforementioned tragedies with civilian casualties – air defense and missile defense systems. It is also necessary to increase sanctions pressure on Russia and finally recognize it as a state sponsor of terrorism. Putin sees any hesitation on this issue as weakness and an invitation to continue killing Ukrainian civilians.

– At the Putin’s instructions, the Russian government encourages acts of international terrorism against political opponents and nation-states;

– Russia waged a campaign of terror during the Second Chechen War;

– It fired at civilians in Georgia;

– Since 2014, it has been supporting members of illegal armed groups that commit acts of violence against civilians in the Donbas;

– It struck the civilian population of Syria;

– It provides material support to Syria, which is considered a state sponsor of terrorism;

– It sows terror around the world through private military networks of mercenaries, such as the Wagner group, etc.

The list of state sponsors of terrorism includes states that have repeatedly supported terrorist acts worldwide. The sanctions imposed on such states include restrictions on receiving assistance from the United States, a ban on the export and sale of defense products, controls on the export of dual-use goods, and various financial and other restrictions.

Today, there are four states on this list: Cuba, North Korea, Iran, and Syria. The final decision on recognizing Russia as such a state should be made by the administration of the American president. After the shelling of Kremenchuk, it is the moral duty of President Biden to make such a decision.

Although, the definition of Russia as a state sponsor of terrorism, probably, will not fully reflect the essence of Russia itself and the methods that it chooses to communicate with the outside world. A more appropriate definition is a terrorist state. This is exactly what Volodymyr Zelensky called Russia after it killed innocent people in the Kremenchuk shopping center: “The Russian state has become the largest terrorist organization in the world. It is a fact. And it should be a legal fact. And everyone in the world should know that buying or transporting Russian oil, maintaining ties with Russian banks, paying taxes and duties to the Russian state is giving money to terrorists.” There is nothing more to add.