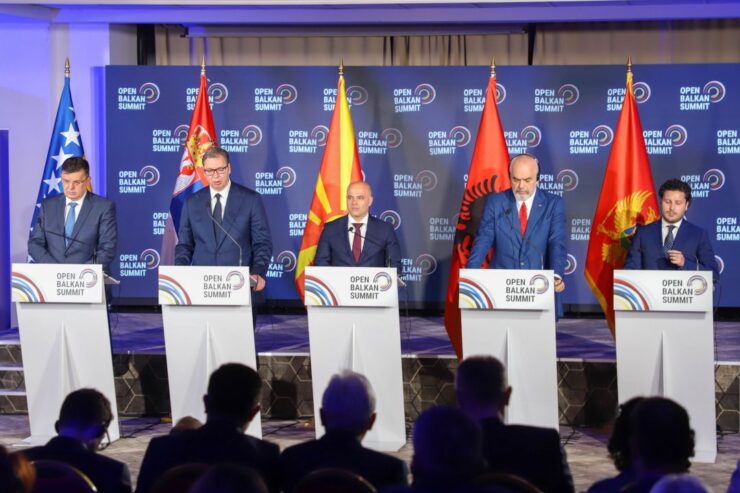 Russian large-scale invasion in Ukraine could significantly accelerate integration processes in Europe. At the recent EU summit, Ukraine and Moldova received candidate status. And this caused reaction of some Western Balkans leaders.

At the same time, it is expected that current security situation in Europe will still accelerate European integration processes in the Western Balkans. Primarily for Albania and Northern Macedonia, as well as Montenegro, where a pro-European government came to power after a protracted political crisis.

This new trends revive disputes about the future of the initiative “Open Balkans”. The initiative was launched in 2019 by three countries: Albania, Serbia and Northern Macedonia. It was a response to the slowdown in European integration process and its time uncertainty.

According to initiative a common market and mini-Schengen are planned. Also “Open Balkans” is positioned as open to other countries of the region. Montenegro and BiH were present as observers at the last summit of the initiative in early June in Ohrid.

Serbia is considered to be the main beneficiary of economic integration under the “Open Balkans”. It has the largest economy and the best development indicators among all current and potential participants. Therefore, Serbia can and will dominate in Open Balkans, just as Germany dominates in the EU. Serbia is considered to be the most interested in this initiative, due to the uncertainty of its European integration prospects with regard to the Kosovo issue.

In addition, there are some misgivings that position of Serbia in the initiative will create the preconditions for penetration and consolidation of China and, until recently, Russia on Western Balkans.

Albania, represented by incumbent Prime Minister E. Rama, is a strong supporter of the initiative. But opposition in Tirana are using this fact to criticize the government, claiming Open Balkans to replace European integration.

It can be argued that the activity of E. Rama is primarily not an economic but a national and political factor. It is about trying to unite all ethnic Albanian territories in one project: apart from Albania, it is Northern Macedonia, Serbia and Kosovo, which is actually is situated inside the initiative geographically. In this way, the social demand of the Albanian nation for unification is being fulfilled.

As part of the initiative, Northern Macedonia has to take into account the position of its Albanian part, which makes up a third of the population, has a strong political representation at the highest level and can coordinate its position with Tirana. On the other hand, Northern Macedonia needs strong allies in the region, due to Bulgaria’s not-so-friendly position, which in fact has blocked for Skopje European integration.

Among other potential members in the region, there is ambiguity about the Open Balkans. The main argument against is that the initiative is replacing the European integration of the region and further delays it.

Kosovo demonstrates controversial perception of Open Balkans initiative. On the one hand, they understand possibility for strengthening integration of Albanian territories. But the current Kosovo leadership actively appeals to its “Serbocentric” mode. In particular, they demonstrate their unwillingness to continue the negotiation process with Belgrade.

The BiH leadership traditionally demonstrates a multi-vector position about Open Balkans initiative. Among three members of the Presidency of BiH position of Z. Koshmich can be called neutral, S.Dzhaferovych’s position is negative, and M.Dodik’s position is completely positive. Objectively, this initiative may be beneficial for BiH, as its European integration is even more illusory than those of Serbia.

Position of Montenegro is much more important for the Open Balkans than its potential economic contribution to it. Participation of Montenegro in the initiative geographically closes the circle of participants with Kosovo inside. Also Montenegro has an Albanian minority, so it will contribute to the realization of Albania’s interests mentioned above. Tirana declares friendly relations with Montenegro and in fact has some influence on the country’s policy through the Albanian minority and its representation in the Montenegrin authorities.

Moreover, good preconditions were created for accelerating the process of joining the EU after change of government at the end of April. New Montenegrin Government believes that only a few necessary reforms in the field of law and the judiciary are on the way, which are planned to be launched in the next 3-4 months.

However, the new Prime Minister of Montenegro D.Abazovic became a supporter of the Open Balkans. The pro-Serbian Socialist People’s Party is an important member of the current minority coalition. During coalition negotiations it insisted on the inclusion Montenegrin accession to the Open Balkans initiative into Coalition Agreement. And Abazovich must take this into account.

There is also the view that the United States evaluates the Open Balkans as a possible mechanism to increase its influence on Western Balkans. Perhaps the United States expects to deal some important issues by expanding the initiative. For example: inside BiH, between BiH and Serbia, Serbia and Kosovo. As well as to reduce Chineese influence on the Balkans and completely eliminate Russia’s presence here. From the end of 2021, the US Special Representative for the Balkans G.Escobar regularly welcomes the Open Balkans initiative, emphasizing that it should not hinder European integration process of the region and should include all six countries.