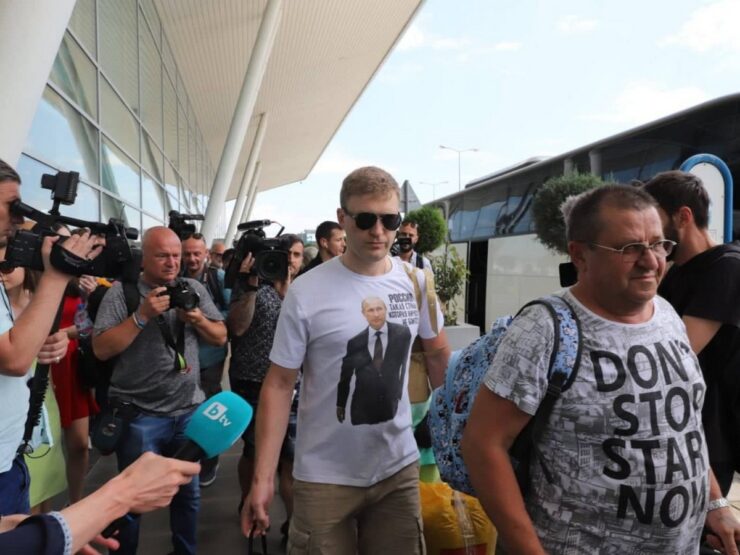 On Sunday the 3rd, 70 officials of diplomatic missions of the Russian Federation in Bulgaria and their family members left the territory of the country. The decision to expel them was announced by Outgoing Prime Minister Kiril Petkov on June 28. According to him, the employees of the embassy were exposed to espionage. He refused to say more about the Russians’ activities, saying the information was confidential.

After Petkov’s statement, the Russian ambassador to Bulgaria, Eleonora Mitrofanova, officially threatened that if the note on the expulsion of 70 Russian diplomats and representatives of the mission was not withdrawn, the embassy would be closed.

However, the Bulgarian government had no intention of backing down and reversing its decision. At the time, the Russian ambassador said that she would ask the authorities in Moscow to “immediately” close the embassy in Sofia and warned that this would also mean the closure of the Bulgarian diplomatic mission in Moscow.

The tactic of the Russian ambassador was obviously to escalate the tension in the expectation that Bulgaria’s position would crack and Bulgaria would be the first to blink.

Though, Bulgaria once again rejected the Russian ultimatum. Talking to the media, Kirill Petkov reminded that no country and no diplomat can impose conditions for an independent and free Bulgaria “from now on” and called on the authorities in Moscow to “correct such threats.”

By the way, this is not the first example of Ambassador Mitrofanova’s behavior that does not correspond to her status as a diplomat and she generally stands out among other ambassadors in Sofia. She often speaks harshly, and many Bulgarians find her words offensive.

In particular, the Russian embassy headed by her periodically hints that Bulgarians are losers. She herself claims that the Bulgarian people support the Kremlin, unlike their “absolutely pro-American” government. She compares the liberation of Bulgaria in 1878 with the Russian military aggression in Ukraine today.

Before Russia’s large-scale invasion of Ukraine, Mitrofanova allowed herself to directly threaten the population of the country in which she was accredited and give instructions to its authorities on local television. “If NATO military bases and strategic weapons are placed in Bulgaria, you will become a target,” Mitrofanova said then.

So far, no foreign ambassador in Sofia has allowed himself to do something like this. As a result, calls for her expulsion from the country are increasingly being heard in Bulgaria. They come not only from citizens on social networks, but also from politicians, including the ruling coalition.

The European External Action Service stated that the Russian Federation’s threat to break diplomatic relations with Bulgaria is groundless, and Sofia’s decision fully complies with the norms of international law. According to Brussels, such a move by Russia will only contribute to Moscow’s further international isolation.

As for the reasons for the expulsion of Russian diplomats, two are officially named. The first is reciprocity, that is, the number of officials of Russian diplomatic missions in Bulgaria should not exceed the number of Bulgarian missions in the Russian Federation. “The number should be maintained within the limits of up to 23 diplomatic and 25 administrative and technical employees,” the Ministry of Foreign Affairs of Bulgaria said in its statement.

The second reason is the “performance by Russian officials of activities recognized by the competent authorities of Bulgaria as incompatible with the Vienna Convention on Diplomatic Relations… These activities were qualified by the relevant institutions as a threat to national security and reason for recognizing them as undesirable.”

It is also possible that the expulsion of Russian diplomats was a consequence of the above-mentioned activities of the Russian ambassador and her subordinates aimed at interfering in the internal politics of Bulgaria with the goal of destabilizing it. One of the results of such intervention was the recent overthrow of the government of Kiril Petkov. In particular, he himself stated that Moscow used hybrid warfare tactics to overthrow his government.

As for the further development of the situation, most likely the Russian embassy will have to return to normal work, because Russia has a lot to lose if it decides to close its embassy in Sofia. Having 43 employees, it can normally conduct diplomatic activities. And of course, it will continue its activities aimed at further destabilizing the country, however, simply with fewer resources.

As for Mitrofanova herself, her work of destabilizing Bulgaria has also the opposite effect. By staying in Bulgaria as long as possible, she does a lot to identify and counter Russian threats. The speed at which she is damaging Russian diplomacy and Russian interests, and helping to consolidate Bulgarian society around the need to distance itself from Russia, is far greater than what the Bulgarians can achieve on their own.

As for the retaliatory actions of the Russian side, or even the closing of the Bulgarian embassy in Moscow, it will not greatly affect the political, cultural, or economic exchange between Bulgaria and Russia, because they are at a very low-level today.