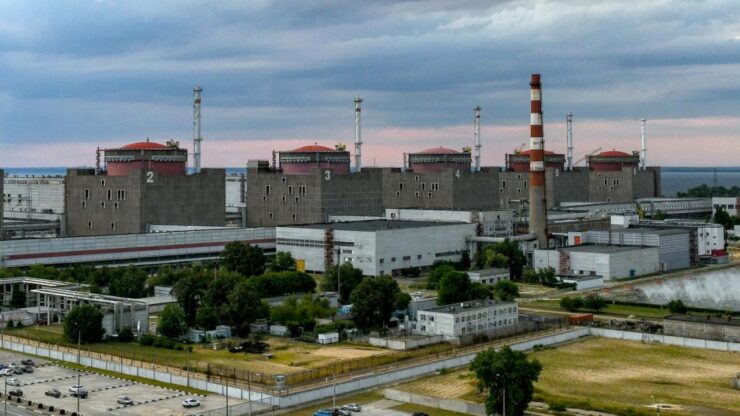 In order to understand the hostage crisis that occurred in the Zaporizhzhia nuclear power plant, it is necessary to understand the very beginning of the aggression against Ukraine. The complete character of the Russian Federation should be taken into the analysis. If we look at the retrospective of Russia’s actions, both as the Tsar and as the USSR, we will see that blackmail and hostage situations are the rule, not the exception.

The method of blackmail is a characteristic of the totalitarian spy Vladimir Putin. He devoted his entire professional life to controlling other people. Whether through fear, threats, blackmail and the use of force. If we look at the internal situation in the Russian Federation itself, the system of blackmail is widespread in all pores of society. Whether it is blackmailed oligarchs or ordinary people is absolutely irrelevant. The only difference is that the common people did not get rich from public resources. The system of blackmail is also reflected in the international arena and has been so since the 19th century.

One of the parameters to attack Ukraine was based on the energy blackmail of Europe. Russian strategists had a wrong assessment, which showed them that they have Europe in a checkmate in terms of dependence on natural gas. Today, six months after the attack on Ukraine, Europe got rid of 2/3 of that dependence. Russian energy blackmail did not prevent the EU from supporting Ukraine with all its efforts, both militarily and materially. So, the bully faced a harsh response, the blackmail failed.

Once the vicious cycle of fear and blackmail is broken, freedom comes.

Ukraine has shown that Russia is a disorganized totalitarian state capable of murdering both its own and foreign citizens from dark ambushes, but when it encounters a firm response, chaos arises.

Namely, the former spy and master of Russia Vladimir Putin, characterized by his gift for asymmetric action, believes that the whole world works that way. Maybe it worked for him in his career, but today the reflectors are turned on, and only the ideologically blind do not see this maneuver of his.

Russia’s performance gives results only if the intelligence methods of distraction are successfully applied. Hybrid warfare in its essence is based on combined methods and techniques that are not necessarily violent, but do violence in their synergistic effect. The Russian tactic of using pressure on the democratic world was very pronounced, but also ignored by EU policy makers. The war in Ukraine changed everything. Energy blackmail as a key asset more or less did not bear fruit, but it opened up possibilities for manipulation.

The cycle of blackmail is slowly coming to an end. Russian propaganda does not produce results on the battlefield.

During January 2022, the Russian Federation openly took Ukraine as hostage. In the occasion that NATO does not return to the positions of 1997, the consequences will be borne by the attack on Ukraine. And that happened.  Of course, this unrealistic request is in the same category of behavior as Al Capone and other mobsters. After the free world provided military and material support to Ukraine in accordance with Article 51 of the UN Charter, the threat of nuclear war was highlighted. As the war progressed, Russia only changed hostages. In the food supply issue caused by Russia, the poorest and most vulnerable inhabitants of our planet have been taken hostage. Ukrainian civilians have largely become hostages, any successful Ukrainian action results in retaliation against the civilian population throughout Ukraine.

It is very important that we understand this pattern. When a bully faces strong resistance, he continues to weigh down weaker and weaker victims.

The thesis that it is necessary to declare Russia a terrorist state is increasingly present. The most important names from security science and international law presented those arguments. It can already be seen that Russia is behaving like a real terrorist organization. Namely, its troops deliberately occupied the Zaporizhzhia nuclear power plant, from which area they carry out continuous operations, convinced that the Ukrainian defenders will not risk a nuclear disaster, and therefore will not use counter fire. Palestinian terrorists do the same in Israel, where they use kindergartens and hospitals to avoid the response of the Israeli Defense Forces. There is every chance that Russia will not use nuclear weapons, because it would risk it to being neutralized over its territory. A suitable replacement, a hybrid replacement, was found at the Zaporizhzhia nuclear plant. Another example of asymmetric, subversive actions. This time, half of Europe was taken hostage. That all this has examples of nuclear terrorism can be found in the following facts. Inside the power plant are armed Russians, who must have already mined critical points on this facility, and in the event of an anti-terrorist Ukrainian action, they are ready to pull the trigger and cause damage and sabotage, and thus a disaster. It should not be ruled out that the Russian strategy is based on the formation of a radioactive belt and the permanent ecological and economic destruction of Ukraine, with appropriate false excuses. An additional reason for concern is the enormous proliferation of disinformation about Zaporizhzhia crisis. The Russian side categorically rejects the demilitarization of the nuclear power plant. Which is one more prove that this is hostage situation.

It should be remembered that the attack on Ukraine was also preceded by a barrage of disinformation and stories about biological weapons, “Nazism”, “genocide”. Russian disinformation is an infallible guide to uncovering their moves and intentions. Zaporizhzhia nuclear power plant is no exception. They threatened the Ukrainian people, and now they threaten the entire humanity, until yesterday with nuclear attacks, famine, and now with a nuclear disaster. The naive would ask why Russia would do that? From the Russian perspective, they are attacking the entire democratic order in Europe, they believe that they have “informed” the whole world with the broadcasted disinformation and that we should all believe them, or already believe them.

That’s right, Russia is behaving like a terrorist organization. It is used by taking hostages, threatening the civilian population, using indiscriminate and illegal violence with political demands fallow up. Is this different from the late Bin Laden? It’s not. The only danger is that a state with nuclear weapons decides to go rogue and use all its state resources. Are Russian embassies terrorists branches or legitimate state representatives? It remains for each country to rub its eyes and wake up and look at the situation realistically. If you don’t want to deal with Russia, she will deal with you whether you like it or not!

Program Manager of the Center for Strategic Analysis (Serbia)