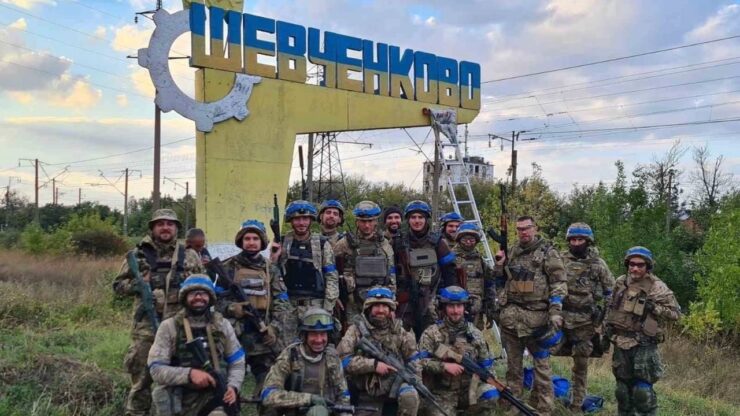 The rapid and successful counteroffensive of the Ukrainian defense forces in the Kharkiv region in early September, during which they managed to liberate about 8,500 square kilometers of Ukrainian territory and 388 settlements, is extremely important for the further course of the war and the future military success of Ukraine.

Firstly, almost the entire Kharkiv region has been liberated, and for Kharkiv itself, the threat of shelling, primarily by cannon artillery, has been significantly reduced. The loss of the Izyum bridgehead for the Russians is the loss of the opportunity to develop an offensive further south into the territories of the Donetsk region controlled by Ukraine.

Despite the low pace of advancement in the Kherson region compared to the Kharkiv region, the counteroffensive actions of the Ukrainian army continue there as well. The slower pace in the south is explained, first of all, by the conditions of the terrain, because the Kherson steppes are unfavorable for offensive operations. The absence of large forests and other natural shelters practically does not allow the use of any serious amount of armored vehicles. For this reason, the Armed Forces of Ukraine use the tactics of a “creeping offensive” using almost only infantry. However, now the Ukrainian units are located 20 km from Kherson. From the very beginning, the Ukrainian army had fire control over the crossings across the Dnieper, and over the past weeks of September, it only increased it. This, of course, has a strong impact on the support lines of the Russian grouping on the right bank of the Dnieper and is holding down its actions. Under the current conditions, it can neither be reinforced with personnel and weapons nor withdrawn to the left bank of the river. According to the latest reports from the Ukrainian military, they have already established fire control over almost the entire territory of the Kherson region.

Thirdly, a very important consequence of the Ukrainian counteroffensive and the flight of the “world’s second army” was a lot of captured Russian soldiers, that is, an increase in the exchange fund for the Ukrainian side, as well as a large number of trophies. Of particular importance are artillery systems, armored vehicles, and ammunition for them. The people already call it nothing more than “Russian Lend-Lease”.

Fourthly, a successful Ukrainian counteroffensive is likely to provide new incentives for Ukraine’s Western partners to provide even more military assistance. This is especially true for those countries that have the most doubts about what kind of support should be provided to Ukraine.

For example, against the background of news about the successes of the Ukrainian army in the Kharkiv region, the German Bundestag called on the German government to immediately support Ukraine and provide more weapons, including Marder infantry fighting vehicles and Leopard 2 tanks. Their compatriot, the President of the European Commission Ursula von der Leyen, takes a similar position. “If they (Ukrainians) say they need battle tanks, then we have to take it seriously and give them to them,” she said, adding that Ukraine knows exactly what it needs “to protect its people and itself.” “I support European states to supply what Ukraine needs. In the end, Ukrainians are proving that they can defend themselves if they have the right military means,” added the head of the European Commission.

For his part, US Secretary of State Antony Blinken has already officially announced a new $600 million defense aid package for Ukraine. This amount will increase the total American military aid to Ukraine to about $15.8 billion since the beginning of Joe Biden’s administration.

Fifthly, the longer the war lasts and the more successful the Ukrainian army’s actions become – as it was in the Kharkiv and Kherson regions – the more obvious Russia’s problems with recruiting personnel ready to fight in Ukraine become. Today in Russia, one can already hear calls for general mobilization, not only from various marginals but also from well-known politicians. So, the leader of the Communist Party Zyuganov said that “the special operation has grown into a full-fledged war and that the maximum mobilization of forces and resources is needed.” In turn, the head of the State Duma faction of “A Just Russia”, Sergei Mironov, said the following: “We started the SMO, and now we are waging a real war with NATO, we need to mobilize the economy, budget, and mobilization in our heads.” Despite such statements, Putin is not willing to proclaim a general mobilization, as he fears the negative consequences of such a decision, primarily for his regime. This is confirmed by the Kremlin’s recent statement that “at the moment” national mobilization is not being discussed there.

At the same time, the Kremlin decided to take the easier route: to recruit one of the most vulnerable categories of the Russian population – the prisoners. So, on September 14, a video circulated in the media and social networks, in which a person very similar to the head of “Wagner” PMC Yevgeny Prigozhin made a speech in one of the Russian penal colonies, which, was the recruitment of prisoners for the war in Ukraine.

Thus, Prigozhin uses the “Stalin’s way”, allowing the Kremlin to avoid the order for general mobilization, and thereby prevent social tension in Russian society. Despite this, the effectiveness of this method is rather doubtful, since it takes a lot of time to conduct high-quality training of personnel who could qualitatively replace or strengthen paratroopers or marines, or the same mercenaries from the “Wagner” PMC. And today Russia does not have much time. And the big question will be the supply of prisoners with everything necessary, including more or less normal weapons. Therefore, their fate, most likely, is to be cannon fodder, which will perform various most dangerous tasks and who will plug holes at the front.

The head of Chechnya, Ramzan Kadyrov did not stand aside from the agitation of the Russians for going to war and called for “self-mobilization”. “Russia is a federal state in which the regions can be the initiators of any undertakings. And one of these undertakings today should be “self-mobilization”. There is no need to wait for the Kremlin to declare martial law, or vice versa, sit back waiting for the end of the SMO in Ukraine,” Kadyrov said. But, such calls of his are even more hopeless than Prigozhin’s actions. The bulk of Russian volunteers have either been fighting in Ukraine since 2014, or since the beginning of this year, or have already “finished their fight” (i.e. either died or remained crippled). The same population that remains and actively supports Putin’s “special operation” is ready to do it exclusively from their sofas, and not in the trenches and under the fire of Ukrainian artillery. The unreadiness of Russians to die in Ukraine for the sake of its “denazification” is also evidenced by the fact that hidden mobilization in Russia failed and does not bring the desired results to the Kremlin.

Well, it is also should be mentioned how Putin responds to the successful counteroffensive actions of the Ukrainian army. Unable to adequately respond to it at the front, Putin’s troops once again resort to strikes against civilian infrastructure deep in Ukrainian territory. While President Zelensky travels to Izyum to express gratitude to Ukrainian soldiers for the liberation of Ukrainian lands from Russian occupation, Putin fires missiles at critical infrastructure in Kharkiv and the nearby Poltava and Sumy regions, as well as Kryvyi Rih. He calls it “a few sensitive warning strikes against Ukraine” and threatens that “there will be an even more serious response in the future.” But, after almost seven months of the war show that trying to threaten and intimidate the Ukrainians, Putin subsequently gets the opposite effect: their even greater unity and readiness to resist.