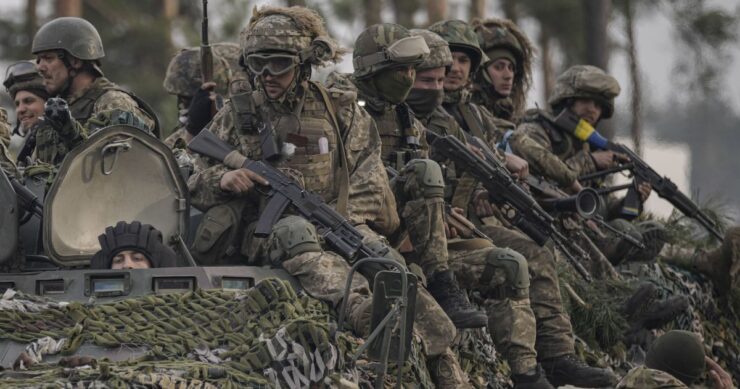 The war. Ukraine continues to hold the initiative

In general, the situation in the war remains difficult for Ukraine, but, according to the Ukrainian General Staff, it is under control. Ukrainian forces continue to gradually liberate the territories occupied by Russia.

The situation at the front line

The most difficult it is now in the Donetsk direction, where Russian troops have been trying to capture Bakhmut for eight months. The Siversk-Soledar-Bakhmut line is a frontier that is very difficult for them to overcome. The advance of Russian troops there is very slow – no more than 100-200 meters. At the same time, in some areas, Ukrainian counterattacks in one day make it possible to regain positions that the Russians have been trying to “gnaw through” for several months.

A feature of the fighting in the Donetsk direction is the use by the Russian command of a large number of mobilized, who, in the format of a human shield, constantly rush to Ukrainian positions and suffer huge losses. At the same time, they create a significant burden on the Ukrainian infantry and artillery.

In the Luhansk direction, one of the important sectors of the front is Svatovo-Kreminna. These two settlements and the R-66 highway connecting them are one of important lines of Russian defense. Now all the efforts of the Ukrainian units are aimed at getting closer to this route to establish fire control and ensure the cutting of this sector of the front. The advance of Ukrainian forces north and south of Svatovo is inevitable, but difficult since the Russians managed to bring up reserves there.

In the Kherson direction, despite statements from the Russian command about an alleged partial withdrawal of troops from the western (right-bank) part of the Kherson region and the evacuation of the local population, there is a rotation of Russian units. Using the ferry, plying in the area of ​​​​the Antonivsʹkyy bridge, the artillery is being transferred to the left bank of the Dnieper, and the paratroopers and marines remain on the right bank with the task of preparing Kherson for battles in the city.

Probably, the Russians realized that they could not hold the right-bank part of the Kherson region. Consequently, they want to inflict maximum losses on the Ukrainian forces there, so that the development of the liberation of the entire region or the transfer of an offensive operation to any other sector of the front would be impossible within the next 2-3 months.

In addition to the above mentioned, it should also be noted the attack on the morning of October 29 of the Black Sea Fleet base in the bay of Sevastopol. An operation of this type, which involved a “swarm” of the sea and air drones, was carried out for the first time in world history. Its result was the damage of at least three Russian ships that are carriers of “Caliber” missiles, including the new flagship of the Russian Black Sea Fleet – the frigate “Admiral Makarov”. The Kremlin immediately blamed Ukraine and Great Britain for this. The latter dismissed the accusations against itself, and Ukraine did not take responsibility for the attack but did not directly refute Moscow’s statements.

Continuation of the air terror strategy

Almost immediately after the attack on the base of the Black Sea Fleet in Sevastopol, Russia launched another massive air strike on the civilian infrastructure of Ukraine. The Russian president said they were a “partial response” to the attack on Russian ships. However, as in the case of similar massive strikes after the blasting of the Crimean bridge, these attacks are a continuation of the Kremlin’s strategy of air terror against Ukraine, the purpose of which is to leave Ukrainians without heating, electricity, and possibly water supply in winter, undermine their will to resist and provoke a new flow of Ukrainian refugees to Europe.

From a purely military point of view, air attacks on Ukrainian cities and critical infrastructure are used by the Russian command to disperse Ukrainian air defense and constantly reveal their work. This is especially true for the use of Iranian Shahed 136 drones. They are not used massively, in one hit, but dosed – to constantly load Ukrainian air defense in different areas and additional reconnaissance of targets. Consequently, strikes are carried out on the rear, in small groups, every day, without interruption. At the same time, missile attacks on cities, life support facilities, and critical infrastructure, as well as industrial enterprises, are carried out by the Russians to force the Ukrainian command to pull air defense from the front to the rear areas and thereby free up space for their aircraft.

Although the Russian Ministry of Defense announced the end of “partial mobilization” in Russia and reported to President Putin that his task to call up 300 thousand people were fully completed and that no new waves of mobilization are planned, activities to attract new human resources are actively ongoing and it is likely that this will continue in the future. Today in the regions, the distribution of summons is being carried out, and those who are subject to mobilization are being caught both on the streets and through their employers. There are also already signals that the Russian authorities and businesses are preparing for the second wave of mobilization.

In a war of attrition of human resources, the Kremlin has apparently made a bet on penetrating Ukrainian defense and deterring Ukrainian attacks by the massive use of manpower. That is, he decided to resort to using one of the favorite methods of Soviet military leaders during the Second World War. Mobilization allows the Russian command to replenish its troops with the necessary personnel and even increase their numbers at the expense of those mobilized. The fact that such an approach only leads to an increase in the overall Russian losses in manpower and at the same time slowly affects the situation for the Russian troops at the front line doesn’t bother Kremlin much.

The commanders instill in the mobilized that they are being taken to the front line solely for the organization of defense and operations mainly in the second echelon. In fact, after getting to the front line mobilized at any necessary moment and in any quantity go where the command says – and often “fill the gaps” on the first line.

The situation is even worse for the prisoners recruited by the “Wagner” PMC. They are thrown into the most dangerous areas in the first echelon, and regular servicemen act as barrage detachments – by the way, another example of using the Soviet experience of the Second World War. There is no pardon that Prigozhin, the owner of Wagner, promises them during recruitment. According to the documents, they are all convicted. According to documents, they are transferred to prisons of the Rostov region, from where they are already being sent to the war on the first line. Pardons will be issued for a few survivors and seriously injured, and then only in exceptional cases.

In the context of the use of prisoners, one should also recall Putin’s recent lifting of the ban on the mobilization of those convicted of serious crimes. Now in Russia, it is possible to call for military service to mobilize citizens who have an unexpunged conviction for murder, robbery, banditry, drug trafficking, and most other serious crimes. This, in turn, suggests that the use of prisoners as cannon fodder by the Russian military command will only increase.

In addition to the actual mobilization, the Kremlin simultaneously uses other ways to replenish the number of the Russian army. In particular, due to the “reduced” (officially) autumn conscription, which began on November 1, and to allow young people aged 18 to 27 to be called up for military service. Given previous experience, there is no doubt that some part of them will be sent to fight in Ukraine.

Also, as part of the search for additional sources of replenishment of combat losses, the Russian General Staff is working with servicemen dismissed due to injury. They are offered to undergo retraining for specialties associated with a smaller amount of physical activity.

In addition to using the Russian mobilization fund directly, the Kremlin is trying to find additional human resources for the war outside of Russia. This, in particular, can explain the introduction of martial law by Putin in the Ukrainian territories occupied by Russia. According to the already tested scheme in the previously occupied Donetsk and Luhansk regions, the Kremlin is trying to use the population from the occupied territories of the Kherson and Zaporizhzhia regions in the war against Ukraine.

In addition, there is information that Russia is trying to recruit former fighters of the Commando Corps of the Afghan National Army. According to media reports, the former military of the most combat-ready unit of the Afghan army, who was once trained by American and British instructors, receive messages from Russian recruiters.

Today, the Ukrainian Defense Forces continue to hold a strategic and operational initiative along the entire front line. The main tasks for them are the liberation of the occupied territories, preventing the capture of new ones, providing cover for critical infrastructure facilities with air defense and missile defense systems, and continuing to form and train reserves for future hostilities. The situation, in general, remains difficult, however, as they say in the Ukrainian General Staff – under control.

For its part, the Russian command is trying to prevent the advance of Ukrainian troops in some sectors of the front and to continue attacking in others. Moreover, in both cases, it does this with the massive use of mobilized personnel. As a result, among the latter, there are heavy losses, which are the result of both the illiterate use of those mobilized by commanders and the low level of training of those called up for mobilization.

At the same time, Russia continues the air terror of Ukrainian cities and Ukrainian critical infrastructure.

Likely, the idea of ​​“freezing” Ukraine and suppressing it with mobilized cannon fodder will remain the core of the Kremlin’s strategy in the war against Ukraine for the coming months.