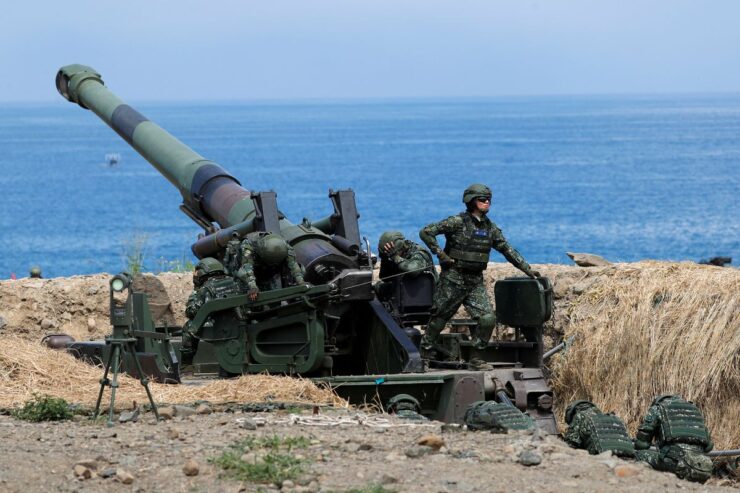 The Pentagon’s Assessment of the Situation Around Taiwan

NGRN reviewed the latest Pentagon’s report on the development of the situation around China.

Recently, the PRC has increased its diplomatic, political and military pressure on Taiwan, showing signs of possible control over Taiwan by military means. Due to the fact that Taiwanese society has become less willing to unify with China over the years, the PRC leadership may consider this situation as a “closing window” for unification with Taiwan under the principle of “one country, two systems.”

In addition, by 2027, China should accelerate the mechanization, modernization and digitization of the PLA, which will create a more powerful military tool to seize Taiwan, and strengthen the system of strategic deterrence.

Circumstances that can be a “trigger” and cause an invasion (specified at various times in the speeches of the Chinese leadership and strategic documents) include: – formal recognition of independence by Taiwan; uncertain actions towards Taiwan independence; – internal unrest in Taiwan; – acquisition of nuclear weapons by Taiwan; – Taiwan’s rejection of the unification dialogue; – foreign military intervention in Taiwan’s internal affairs; exhaustion of opportunities for peaceful unification; an attempt by separatist forces to separate Taiwan from China.

In order to solve the “Taiwan issue”, China can carry out a series of actions (threats) in order to force the leadership of Taiwan to accept Beijing’s conditions or seize the island. In addition, the PRC will try to deter potential US intervention through a missile or nuclear threat.

Four options for actions by the PRC are being considered:

A) Air and Maritime Blockade – blockade of sea and air traffic, including stopping Taiwan’s vital imports for weeks to months, to force Taipei to capitulate. At the same time, missile strikes and the seizure of Taiwan’s offshore islands, the use of EW tools, cyber and informational and psychological operations aimed at Taiwanese society and the government, and the maintenance of pro-Chinese narratives in the international environment will be used.

B) Limited Force or Coercive Options – the use of various subversive, punitive military actions in a limited campaign against Taiwan in combination with economic pressure, information and cyber operations against the government, economic and military infrastructure of Taiwan. Along with this, special operations forces of the PLA can be used to destroy or damage infrastructure facilities or eliminate Taiwan’s political leadership.

D) Invasion of Taiwan – the conduct of a joint amphibious campaign, which is based on coordinated, interconnected actions of EW, logistics, air and sea support. Objectives: Break through or bypass coastal defenses, establish a beachhead, build up combat power along Taiwan’s west coast, and capture key targets or the entire island. Currently, the PRC is observing actions to increase the use of means for a full-scale invasion: conducting joint amphibious exercises near Taiwan, building an aircraft carrier fleet, additional use of civilian ships for amphibious landings.

At the same time, a large-scale amphibious invasion is one of the most complex military operations and will require air and sea superiority, rapid build-up and resupply on land, and uninterrupted support. An attempted invasion of Taiwan would likely exhaust the PLA and prompt international intervention. Coupled with the attrition of forces, the complexity of urban combat, and the potential for insurgent movement, these factors make an amphibious invasion of Taiwan a significant political and military risk for Xi Jinping and the CCP.

At the same time, the invasion can take place gradually – by conducting landing operations on small islands of Taiwan in the South China Sea (Pratas, Itu-Aba) or larger and better protected islands (Matsu or Kinmen). Such an invasion would demonstrate military potential, political resolve, and achieve some territorial gains while demonstrating a degree of restraint. However, such operations also carry political risks, as they could galvanize pro-Taiwanese independence sentiment and provoke strong international opposition.

Features of the preparation of the PLA for the conflict in Taiwan:

1) Reorganization and training of landing forces demonstrates that Taiwan is a priority for the PLA, as the exercises include large-scale landing operations, training of army aviation, practice of air assault operations. Combat training is aimed at improving the tactics of quick loading, long-distance transportation and assaulting shores in a difficult environment at sea, as well as improving logistical support. Airborne brigades are practicing large-scale amphibious operations aimed at supporting the invasion of Taiwan.

2) In addition, new platforms for amphibious operations with improved capabilities are being built and tested (including Type 075 and 076 landing ships, modern Type 05 armored landing vehicles (AAV) with improved armor, survivability and speed.

3) The PLA Navy is improving means of anti-aircraft, anti-ship and anti-submarine warfare, continuing the development of the nuclear deterrence system at sea and introducing new multifunctional platforms capable of performing various missions.

4) The PLA Air Force has acquired a large number of advanced aircraft capable of conducting operations against Taiwan without refueling, which ensures its significant ability to conduct air and ground operations. A number of long-range air defense systems provide a strong level of protection against attacks on key military facilities or population centers in mainland China. In addition, the Navy has improved refueling capabilities, increasing long-range capabilities.