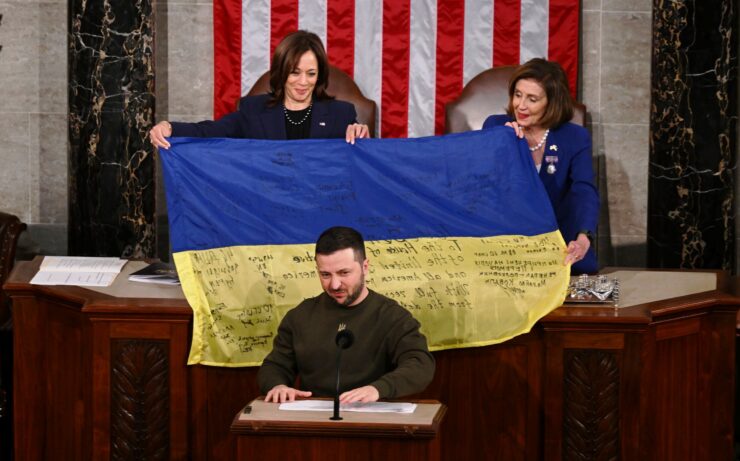 Russian-Ukrainian war. Zelensky in Washington and Putin’s plans for Belarus

From blitzkrieg to stabilization through mobilization

Last week, 300 days have passed since the start of the large-scale Russian invasion of Ukraine. During this period, the military command of the aggressor has already changed the strategy of using its troops on the battlefield several times. It all began with a blitzkrieg, which was based on an erroneous assessment of the situation in Ukraine and completely failed.

After that, Russia staked on the so-called big battle for the Donbas, which was supposed to be based on a large-scale encirclement of the grouping of Ukrainian forces from Donetsk to Izyum and access to the administrative borders of the Donetsk region. The Russians failed to realize their plans. Already in the first weeks of the battle for Donbas, it became clear that a large encirclement was unrealistic. Consequently, the entire “big battle for Donbas” came down to attempts to capture the north of the Luhansk region. The main tool for achieving this goal was the so-called barrage fire, that is, the massive use of artillery. During the peak periods of the use of barrage fire, they fired at Ukrainian positions about 60 thousand shells per day. The result of this approach was certain tactical (not even operational) successes on the battlefield and, at the same time, a strong depletion of Russian ammunition. The devastation of Russian arsenals in the combat zone was accelerated by the Ukrainian forces, which began to methodically work on them with modern Western artillery systems and high-precision munitions. This, as a result, not only reduced the ability of the Russians to use barrage fire but also led to the fact that they began to experience real ammunition hunger.

Having failed to implement a strategy with a large encirclement, the Russian troops themselves repeatedly found themselves on the verge of encirclement and defeat. This was avoided only thanks to their rapid withdrawal from dangerous areas, which often took the form of a stampede.

After the failure of the abovementioned strategies and the repeated “goodwill gestures” by the Russian troops, the Russian military command is now focused on stabilizing the front line and conducting offensive operations (where they can still do it) by using at large the manpower received because of mobilization. Considering that the vast majority of those mobilized are poorly trained, poorly equipped, and poorly motivated, the effectiveness of this strategy looks rather doubtful. At a certain stage, it may allow the fulfillment of certain (again, primarily tactical) tasks, but in the long term, it will not allow Russia to gain a strategic initiative in the war.

From Bakhmut to Washington

Last week, President of Ukraine Volodymyr Zelensky visited the United States. This was his first trip abroad since February 24th. It is important to note that on the eve of his departure to Washington, he also made his most dangerous trip to the front line since the beginning of the war, namely to the city of Bakhmut. There he got acquainted with the situation at the hottest point of the front, expressed his support for the Ukrainian soldiers, and presented them with state awards. For their part, the military handed him a Ukrainian flag with a request to transfer it to the United States “to those whose decisions are important for Ukraine.”

Like almost all significant events related to the Russian-Ukrainian war, the visit of the Ukrainian president to the United States had both symbolic and practical significance.

As for the first, Vladimir Zelensky arrived in the United States as a true leader of his people. He visited the most dangerous sector of the front, showed his support to the Ukrainian military, and inspired them to continue fighting. This especially contrasted with the behavior of the Russian president, who on the same day rewarded Kremlin officials and propagandists in the Kremlin, but not soldiers on the front lines, and himself never visited the territories occupied by Russia.

Another symbolism is that Volodymyr Zelensky’s American voyage coincided with the date of Winston Churchill’s visit to the United States 81 years ago. The trip of the British Prime Minister to the United States in December 1941 took place a few days after the attacks on Pearl Harbor and strengthened the anti-Hitler coalition that eventually won World War II and then built the post-war democratic world.

Volodymyr Zelensky’s visit to the United States took place at the invitation of Joe Biden, who believes that the war in Ukraine has entered a new stage, and therefore both presidents needed to personally discuss the prospects for a further joint strategy in the fight against Putin’s Russia. The American President’s initiative to hold such a meeting means that he personally and the US as a whole are ready to continue to do whatever is necessary to stop Putin and his regime. At the same time, Joe Biden’s interest can also be noted here: a victory over this regime can become his personal experience, his original political legacy.

As for the practical results of the visit, firstly, by speaking in Congress, Volodymyr Zelensky managed to explain to American lawmakers and citizens (i.e. taxpayers) why allocate billions of dollars to Ukraine. His main message to them was: “Your money is not charity. This is an investment in global security and democracy.” At the same time, he repeatedly referred to the history of the Second World War and reminded that the current war is global and that it is not possible to dissociate from it.

Secondly, this visit by Volodymyr Zelensky showed that there is no split in the United States concerning Ukraine, but instead, there is full bipartisan support. This is very important, given that in January the composition of the House of Representatives will change, the majority of which, following the results of the November elections, was won by the Republicans.

Thirdly, during his visit, the Ukrainian president once again stressed that to achieve a just peace, there can be no compromises on the territorial integrity and sovereignty of Ukraine. Thus, he made it clear that only one scenario for the end of the war is acceptable for Ukraine – the one in which Russian troops retreat from all the territories they occupied, including Crimea and Donbas.

Well, the fourth result was a new significant package of military assistance from the United States in the amount of $1.85 billion. It will be an important help for the Ukrainian army in the context of General Zaluzhny’s words about the impending Ukrainian offensive operation. In this package, it is worth noting the transfer to Ukraine (for the first time) of a battery (up to eight launchers) of Patriot air defense systems and ammunition for them, as well as satellite-guided bombs. Also,it included additional ammunition for HIMARS systems, 500 precision-guided 155mm artillery rounds, 10 120mm mortar systems and 10,000 120mm mortar rounds, 10 82mm mortar systems, 10 60mm mortar systems, High-speed Anti-radiation missiles (HARMs), Precision aerial munitions, 45,000 152mm artillery rounds, 20,000 122mm artillery rounds, 50,000 122mm GRAD rockets, 100,000 rounds of 125mm tank ammunition, etc.

Later it became known that the US Congress finally approved the draft government budget for 2023, which includes almost $45 billion for Ukraine and NATO allies. Addressing congressmen during the vote, Speaker of the US House of Representatives Nancy Pelosi emphasized that this bill contains powerful assistance to Ukraine and recalled the speech of Ukrainian President Volodymyr Zelensky in Congress this week. “This bill is about our heroes, honoring our heroes, as well as the extraordinary heroes in Ukraine fighting on the front lines of democracy. And we proudly deliver another round of security com and humanitarian aid,” Pelosi said.

Another important event of the last week was the visit on December 19 of a big Russian delegation led by Russian President Vladimir Putin to Belarus. It was the first trip of a Russian president to Minsk in more than three years.

During the meetings, the Belarusian and Russian sides tried in every possible way to emphasize that the main purpose of the Russian delegation’s visit to Minsk was related to “summing up in the field of economics” and that security issues were not a priority on the agenda. Nevertheless, there was no doubt that the latter was the main reason for Putin to leave his highly guarded places and travel to the Belarusian capital.

After the discussion of issues related to security, the Belarusian and Russian presidents did not take or announce any specific decisions. Despite this, certain conclusions can be drawn from Putin’s visit to Minsk and meeting with his Belarusian counterpart.

The main issue, without any doubt, was the discussion of joint actions during a possible repeated offensive against Ukraine from the territory of Belarus. It is well known in Ukraine that the Russians have such plans, and almost all Ukrainian officials have been talking about them lately. Lukashenka until the last refuses the participation of his army in this offensive, but it is becoming increasingly difficult for him to do this. The Kremlin’s pressure on him is only getting stronger. It is not yet known whether Putin convinced Lukashenka or not, but it is clear that if the Russians attack again from Belarus, Lukashenka will provide maximum assistance to this offensive. The use of the Belarusian army in a “limited mode”, that is, without crossing the Ukrainian border, should not be ruled out either. For example, the Belarusian air defense, located near the border, can cover the Russian offensive, and the Belarusian artillery can provide fire support for the advancing troops, as the Russians did in 2014 when they shelled Ukraine from Russian territory.

Well, another important and very likely topic of negotiations could be the Russian takeover of Belarus, which should be presented in the form of integration processes within the framework of the Union State. By the way, after the meeting between Lukashenka and Putin, a representative of the Belarusian TV channel asked the latter a question on this topic. Putin replied that “Russia has no interest in taking over anyone” and that “there is simply no expediency in this.” In fact, there is both interest and expediency for Russia in such a step. Firstly, Belarus has assets that bring considerable income and which will be very useful for the Russian economy. These are Belaruskali, a significant player in the market of fertilizing, two oil refineries, the gas transportation system, and the aforementioned Belarusian military industry. In addition to purely economic bonuses, Putin also needs the takeover of Belarus from an image point of view. Thus, he will be able to show the Russian society that he continues to “collect lands” and in practice embodies the idea of restoring the USSR.

In this context, it should be recalled that Putin previously wanted to use the scenario of a takeover of Ukraine, when the pro-Russian regime of Yanukovych was in power there. As of 2013, Yanukovych had prepared Ukraine for the “delivery” to Russia, but then the Ukrainian people intervened and, with the help of a revolution of dignity, violated Putin’s plans. Everyone knows what happened next. Given this, we can say now that the prospects for Belarus are not very good.