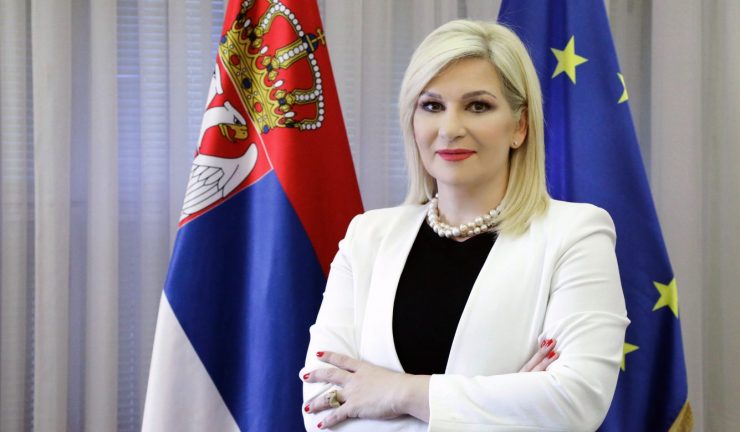 Will the female minister clean the “Augean stables” of Serbian energy sector?

If talking about the objects of Russian influence abroad, one can mention the energy sectors of foreign countries as the main ones. After finding weaknesses in them, the Kremlin then uses Gazprom and its pipes to tie the new “victims”. A clear example of such a “victim” in the Balkan region is Serbia, where Gazprom has managed to establish control over almost Serbia’s entire energy sector. Such a situation does not suit neither the EU, whose member Serbia plans to become one day, nor the United States, which wants to deprive Moscow of its energy leverage over Belgrade and the Balkans in general.

Last year, a reshuffle took place in the Serbian government, which was a good signal for both Serbia’s energy independence and its European integration. Zorana Mihajlovic, who is known for her openly pro-Western stance, has been appointed as Serbian Minister of Mining and Energy – Deputy Prime Minister. At the same time, the capabilities of the new minister today largely depend both on the political situation within the country and on the future policy of the new US administration towards Serbia.

Zorana Mihajlovic has returned to the post of Serbian Minister of Mining and Energy, from where she was removed in 2014 after Moscow’s urging – just two years after she began annoying Russians with a clear pro-European strategy for Serbian energy development.

Interestingly, after her dismissal, all key positions in the Serbian energy sector – from the Mihajlovic’s successor Aleksandar Antic and the president of the state company “Electricity of Serbia” Aca Markovic, to the CEO of state gas operator Srbijagas Dusan Bajatovic, who is considered the main pro-Russian element in the Serbian energy – were occupied by representatives of the pro-Russian Socialist Party of Serbia. The connection between the Serbian Socialists and the Kremlin is vividly illustrated by the fact that their leader and current Speaker of the Serbian Parliament, Ivica Dacic, after each Serbian parliamentary election has flown to Moscow for consultations with whom the socialists, who always have been in the ideal position of a third force (today – second) should form a ruling coalition.

So, at the end of 2020, Zorana Mihajlovic has entered the cabinet for the second time. Her first steps as a minister show that she will once again be the Kremlin’s number one enemy in the Serbian energy sector.

Thus, the first thing she did after taking office was convening a meeting of the heads of all energy companies in the country and forcing the head of Srbijagas Bajatovic out because of “disrespect for the institutions of the Serbian government.”

At the same time, she launched a public attack on him. “I think it is not normal when the CEO of Srbijagas has a monthly salary of 2.4 million dinars (over 20 thousand Euros – ed.), when the average monthly salary in the energy sector is about 65 thousand dinars. That is, ordinary workers will have to work an average of 38 years (i.e. their entire career) in order to earn what Srbijagas’ CEO earns in one month. We will change it very soon and it will not happen again,” – said Zorana Mihajlovic.

She also went at Srbijagas, the reorganization of which is one of the conditions of Belgrade’s agreement with the European Energy Community. “We have committed in the agreement we signed with the Energy Community before 2014 that we will take concrete steps to reform Srbijagas. Until October 20 (2020 – ed.), these commitments were not fulfilled, and we became one step closer to the dispute with the Community,” – Mihajlovic said. At the same time, she said that the solution to this problem has already begun. In particular, at the end of 2020, the government decided to reorganize Srbijagas, which included the separation of the company’s gas distribution activities.

In addition, she demonstratively ignored the Turkish Stream 2 (better known as “Balkan Stream” in the Balkans) gas pipeline’s opening ceremony, which took place on January 1 this year and was attended by President Vucic, Srbijagas’ CEO Bajatovic, Russian Ambassador to Serbia Botsan-Kharchenko and former Minister of Mining and Energy Antich.

Generally, Zorana Mihajlovic has never hidden her negative attitude towards Serbia’s participation in Russian energy projects. Being a member of the G17 party, a smaller partner in the government coalition, she openly opposed the sale of state oil company NIS a.d. to Gazprom in 2008 for a “scanty” 400 million Euros (but with a political guarantee that the South Stream gas pipeline would be built through Serbia).

Despite all Zorana Mihajlovic’s enthusiasm and motivation to reform the Serbian energy sector and bring it out of Moscow’s control, today there are some factors that limit her capabilities.

First, they directly depend on whether President Vucic can continue his two-seat policy in relations with the West and Russia, which in turn depends on whether the West will deliver him an ultimatum to recognize Kosovo’s independence or not. Vucic himself, in his dramatic address to the nation on November 6, 2020, stated that such an ultimatum is inevitable.

If the West agrees to a compromise which would avoid putting Serbia in front of a decision that no government in Belgrade would sign and any referendum would reject it, Vucic would continue to sit in the “Western chair” and thus would open space for strengthening energy independence of Serbia.

If Western pressure on Vucic to recognize Kosovo still happens, it could push him into Moscow’s arms and thus bury hopes for energy reforms and Serbia’s European integration in general. In that case, it will be problematic for Zorana Mihajlovic not only to continue her work on reforming the Serbian energy sector, but also to stay in her ministerial chair.

The second reason that limits Zorana Mihajlovic’s capabilities is the problems in the industry itself. So far, Belgrade’s attempts to increase natural gas consumption have been rather unconvincing. The latest government energy strategy envisages a 31% reduction in gas production in 2023 compared to 2018 levels. At the same time, a reduction in coal use by 2030 is expected at less than 3%. In such circumstances, the gas from the Balkan Stream does not make significant changes in the energy sector of Serbia, but only provides Russian gas flow from two directions – through Hungary and Bulgaria – which also cannot be called diversification, because gas and supplier in both cases are Russian.

Zorana Mihajlovic is trying to change this situation. “For energy security, it is necessary for gas to come from different suppliers. Then we will have an argument to negotiate the gas price with Russia”, – said Minister Mihajlovic and at the same time announced new projects: the resumption of the gas interconnector between Serbia and Bulgaria (Nis-Dimitrovgrad) construction, which will allow to buy Caspian gas in the future, gas from the Middle East, as well as LNG from the terminal in Greek port of Alexandroupolis. For better understanding of the situation around the interconnector, it should be added that today the price of gas supplied to Serbia by Gazprom remains one of the highest in Europe, and the process of building the Nis-Dimitrovgrad interconnector has so far been successfully blocked by “Kremlin friends” both in Belgrade and in neighboring Sofia.

To complete the picture about Serbian energy complex, it should be noted that today 70% of Serbian energy is produced by thermal power plants, which are obsolete and inefficient. External costs for them reach about 13 cents per kWh of electricity, which means that the real price of electricity production in Serbia is about 18 cents per kWh. The situation is worsened by the fact that 76% of Serbia’s coal reserves are in Kosovo, which means that the country also has to import coal. The transition of Serbian energy from coal cannot be quick without significant financial assistance from the EU, which in today’s conditions is hardly to be expected.

In general, it can be said that the appointment of Zorana Mihajlovic as Minister of Mining and Energy of Serbia with her openly pro-Western orientation is an important step from the part of President Vucic, who thus sends a message to the West that he is ready to continue actively cooperating with it, in particular, regarding the reforming of the Serbian energy sector. At the same time, the new minister’s capabilities largely depend on a number of internal and external factors, the development of which will have a direct impact on how successful she will be in cleaning Serbia’s energy “Augean stables.”