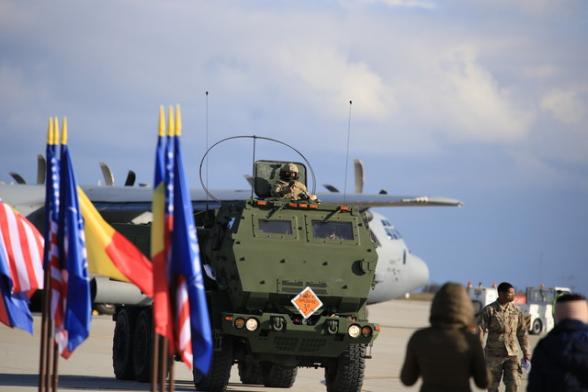 Amb. Celac: NATO is the main source of security against Russian aggression

The New Geopolitics Research Network brings to your attention the video and main points of the speech of Amb. Sergiu Celac, Honorary Chairman of the New Strategy Center, Romania at our on-line discussion “Intermediate-range Missiles in Europe: Arms Race, Conflict, Deal?”.

– Romania’s military planning includes the aim of spending at least 2% of GDP on defense for the next 10 years with at least 20% for a new weapons and modern equipment.

– Romania signed an agreement to purchase 7 Patriot surface-to-air missile systems from the U.S. Army, one of which has been already delivered and currently operating. The others will be delivered during the next 4 years. The acquisition of Patriot air defense systems and HIMARS long range rocket artillery systems enhance interoperability with Romania’s main ally, the United States. Planned acquisition of short and very short range air defense system (SHORAD) will operate in an integrated mode with the Patriot missiles and will replace entirely the Soviet systems.

– Considering the surface-to-surface mobile systems, Romania is introducing the HIMARS mobile system with ranges up to 300 km. For the land operation of Romanian army, it has received a hundred mobile units such as LAROM multiple rocket launcher, developed by Romanian companies jointly with Israel on the basis of Russian “Grad” concept. Furthermore, most of the programs include provisions for local manufacturing and technological transfer aimed at reviving the country’s state owned defense industry.

– For coastal batteries and equipments for navy missile and other warships, the legacy soviet “Rubezh” systems were replaced with modern NATO units with ranges up to 80 km.

– While Russia has complained about NATO’s expansion to include countries that had been in the Eastern Bloc during the Soviet era, NATO’s eastern members, including Romania, see the alliance as the main source of security against growing Russian aggression.

– NATO’s preference today is not to be actively involved in any actions in the Pacific and in particular in the South China Sea. NATO officials always make a clear distinction between Russia and China in terms of strategic confrontation. Russia is seeing as potential adversary and China is seeing as the systemic rival and competitor, but it has never been mentioned as a potential military adversary.

– More should be done to strike a reasonable balance about the attention, given to the two crucial regions – the Eastern flange of NATO and the European Union. The same attention should be paid to the Baltic and Black Sea regions.

– Any bargaining in the bilateral mode between the US and Russia should be necessarily proceeded by more consultations within NATO (by the US with NATO and by the US with EU). US should start consulting with the friends before going to battle field with adversary.