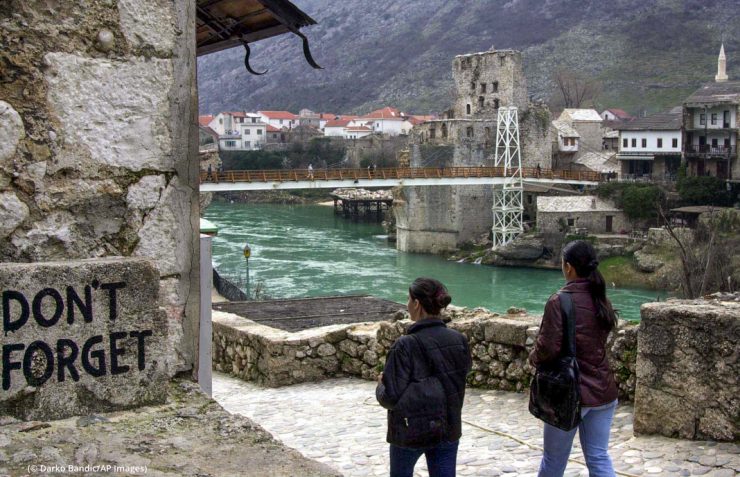 More than 20 years after the end of the war and the conclusion of the Dayton Peace Agreement, there are still ethnic tensions and divisions in Bosnia and Herzegovina. They hinder legal, institutional, and policymaking progress towards greater social integration and reconciliation. The population of the country continues to face problems related to the ethnic differentiation of society after the armed conflict of 1992-1995.

The main goal of the Dayton Agreement and the Constitution of Bosnia and Herzegovina (BiH) was to stop the armed conflict and ensure peace. Therefore it included provisions that created a mechanism of influencing on the decision-making process for the representatives of the main parties of the conflict. This was ensured by granting seats in the House of Peoples (the second chamber of the State Parliament), as well as for the representation of three ethnic groups by three members of the Presidium (the collective Head of State). In accordance with Article IV of the Constitution, the House of Peoples must be composed of 15 delegates, two-thirds of which are representatives of the Federation (including five Croats and five Bosnians) and one-third are representatives of the Republika Srpska (five Serbs). And the Presidium must be composed of three members: one Bosnian, one Croat, and one Serb. However, this provision, aimed at ensuring the political equality of Bosniacs, Croats, and Serbs, excludes the participation of all other ethnic groups in these bodies. So, by adopting such a Constitution, the international community actually legalized the ethnic-based violation of human rights-based in BiH. Moreover, it’s pointedly that the text of the Dayton Constitution was negotiated in English and imposed as an essential part of the peace compromise, rather than being elaborated in the country and adopted by the people.

The Constitution obviously makes a distinction between “constituent peoples” (persons who declare affiliation with Bosniacs, Croats, and Serbs) and “others” (members of ethnic minorities and persons who do not declare affiliation with any particular group because of intermarriage, mixed parenthood, or other reasons). In the former Yugoslavia, a person’s ethnic affiliation was decided solely by that person, through a system of self-classification. Thus, no objective criteria, such as knowledge of a certain language or belonging to a specific religion were required. There was also no requirement of acceptance by other members of the ethnic group in question. The Constitution contains no provisions regarding the determination of one’s ethnicity: it appears that it was assumed that the traditional self-classification would suffice. Only persons declaring affiliation with a “constituent people” are entitled to run for the House of Peoples the Presidency.

This constitutional provision was litigated in the European Court of Human Rights (ECHR) by two citizens of Bosnia and Herzegovina, Dervo Sejdić and Jacob Finci, who complained of their ineligibility to stand for election to the House of Peoples and the Presidency of Bosnia and Herzegovina on the ground of their Roma and Jewish origin. They refused to recognize themselves as Serbs, Croats, or Muslims and demanded equal voting rights with the three “privileged” Bosnian peoples. The ECHR agreed that the situation was discriminative and obligated BiH to change the Constitutional provisions, develop concrete measures aimed at achieving a more integrated society, based on the values ​​of equality and non-discrimination.

However, to date, no consensus has been found and the provision remains in effect. In addition, discriminatory provisions persist in some laws and regulations that give “state-forming peoples” special privileges over “others”. The approach of BiH politicians to the current situation is rather irresponsible. So, as the phrase goes, even bad constitutions (can) work, if there is sufficient political will. Conversely, even good constitutions can fail to work if that will is lacking.

Trying to put an end to the ethnic discrimination and protect rights of three “constituent peoples”, international community together with former leaders of Yugoslavia forget about rights other citizens of Bosnia and Herzegovina.