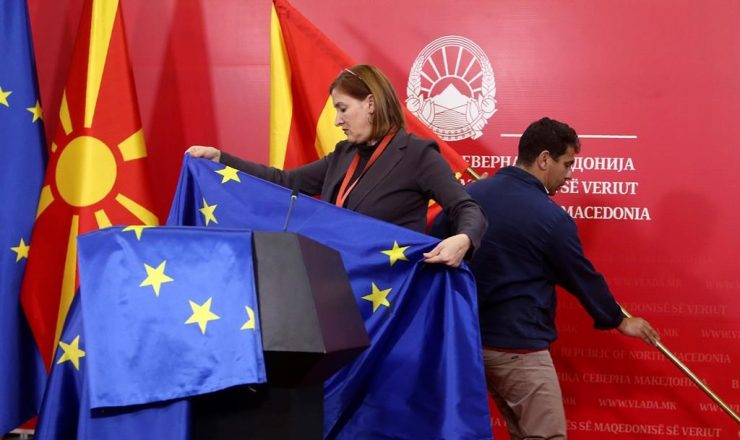 European integration of the Western Balkans: with interest and intentions, but without real progress

Last week, the European Parliament voted on the 2019-2020 Commission Reports on four Western Balkan countries: Albania, Kosovo, Northern Macedonia and Serbia. Although the reports generally reaffirmed the EU’s interest in enlargement at the expense of the Western Balkans, they brought a little optimism to the Western Balkan capitals.

MEPs have once again made it clear that before starting concrete accession talks with these countries, they must first fully fulfill their domestic reforms “homework”. Secondly, all the candidates must have good neighborly relations, as the European Union doesn’t have any interest in importing their internal problems and interstate disputes, which in the long run may cause instability within the EU.

In a report on Albania, MEPs welcomed its clear strategic orientation and commitment to EU integration and called for a formal start of accession negotiations without further delay, but… After full accomplishment of the conditions set by the European Council, which include public administration reform, judicial reform, countering high-level corruption, dismantling local and international criminal networks, strengthening the political dialogue and the functioning of democratic institutions.

The fact that Tirana will have to toil well at its “homework” is also confirmed by the US State Department’s International Narcotics Control Strategy Report, which was published in early March and which, in particular, states that Albania has made “no significant progress toward thwarting money laundering and financial crimes in 2020.”

The abovementioned Bulgarian veto and US State Department’s report play into the hands of Western European countries, which are generally critical of Albania’s accession – particularly France, where the public opinion is skeptical about further EU enlargement, especially in light of the upcoming 2022 presidential election, and the Netherlands, who are too meticulous about Tirana’s domestic reforms.

As in the case of Albania, the report on Kosovo stressed to the authorities in Pristina the need for deep reforms, primarily in the fight against corruption and organized crime, money laundering and financing of terrorism.

MEPs also reminded that five EU member states have not yet recognized Kosovo and called on them to do so, stressing that the process is irreversible. According to them, the recognition of Kosovo by these countries will be useful both for the normalization of relations between Pristina and Belgrade, and for strengthening stability in the region and their integration into the EU. In addition, MEPs called on Kosovo and Serbia to refrain further from any actions that could undermine trust between the parties and stressed that the normalization of relations between them is a priority and a precondition for their European integration.

As for Kosovo itself, the partially recognized republic continues to experience a reformatting of the domestic political map today, and the local political elite that came to power is focused primarily not on carrying out the necessary for European integration reforms, but on consolidating and retaining their power. Thus, the real prospect of lack in the reform progress, the continuation of non-recognition of Kosovo by some EU members, and the linking of its European integration to the normalization of relations with Serbia – which is an extremely complex and durable process – indicates that the start of accession talks between Brussels and Pristina is not a question not only of today, but not tomorrow and the day after tomorrow.

In a report on North Macedonia, MEPs noted that the country has made a consistent progress and maintains a steady tempo of reforms aimed at European integration. They therefore called on the European Union to hold the first intergovernmental conference with Skopje as soon as possible, which would mark the official start of the accession talks. At the same time, they expressed disappointment that Bulgaria and North Macedonia had not yet reached an agreement on bilateral issues and called for continued dialogue to achieve lasting results in the implementation of bilateral agreements in good faith. In particular, the report noted that previous recommendations regarding discrimination against Macedonian citizens who openly express their Bulgarian identity and/or ethnic origin had not been fulfilled.

At the same time, the European Parliament rejected the inclusion in the report on North Macedonia of the so-called “anti-Bulgarian amendment” promoted by the Greens and the European Socialists. In particular, they proposed to include in the report changes that condemn the Bulgarian government in provocative statements on historical issues and called for refraining from such statements, despite the ongoing election campaign in Bulgaria. However, these changes met a sharp opposition from Bulgarian MEPs. The rejection of the amendment had a wide resonance in the Bulgarian media and was commented on by some local politicians and experts as a victory over Macedonian lobbying in the EU.

In general, the situation with the so-called “anti-Bulgarian amendment” once again showed that the historical dispute with North Macedonia has great political weight for the Bulgarian political elites. The way in which the events around this dispute continue to develop, indicates that the Bulgarian-Macedonian tensions are likely to continue after the Bulgarian elections. This, in turn, means that until Sofia and Skopje come to an understanding, the European Union, who emphasizes good neighborly relations, will not take practical steps towards the latter to open accession negotiations with it.

In the report on Serbia, MEPs generally welcomed the country’s progress in developing a functioning market economy and stressed the importance of bringing more dynamism to the negotiation process. However, they stressed that the opening of further chapters of the talks would depend on the Serbian government’s commitment to structural reforms, especially in the areas of rule of law, functioning of democratic institutions, freedom of the press and the fight against corruption.

At the same time, MEPs criticized Belgrade that the level of alignment of its policy with the Common Foreign and Security Policy of the EU is currently the lowest in the region and emphasized the need to improve the results in this area. In addition, they noted that the normalization of Serbian-Kosovo relations is extremely important in determining the tempo of accession talks with Serbia.

It is also interesting that in the European Parliament country reports the specific cases of serious crimes or corruption are rarely mentioned, but the Serbian report included four of them: Jovanjica, Krušik, Savamala and Telekom Srbija.

At the same time, in article 24 of the report, where these cases were mentioned, MEPs invited the Serbian authorities to show the results of their investigations on them and on the fight against corruption and organized crime in general.

Such interest of MEPs in these cases has predictably caused quite negative emotions in Belgrade. Thus, the Interior Minister and The Movement of Socialists’ leader Aleksandar Vulin said that Serbia should reconsider its policy of military neutrality and expand it to political neutrality. The party’s press release also included his quote that the European Parliament’s report on Serbia “does not paint a picture of Serbia but is an image of hypocrisy and prejudice that guided the authors of the report”.

For his part, Serbian President Aleksandar Vucic said that the report was a “naked lie” and that MEPs were apparently “lost in time and space”. He also added that he “cannot sleep from fear” that a report, which is putting pressure on the country to recognize the independence of the former province of Kosovo, could slow down its accession to the EU.

Therefore, it is obvious that neither the report of the European Parliament, which continues to make Serbia’s European integration dependent on the normalization of relations with Kosovo, nor the actions of the Serbian leadership, which is trying to strengthen its regime instead of strengthening democracy, nor its reaction to the MEPs’ remarks, do not bring Serbia closer to the EU accession, but, on the contrary, bring this accession even more into a dead end.

In general, it can be said that the process of accession of the Western Balkan countries to the EU today, in fact, is on pause. This is due to both existing problems within the candidate countries and the tense relations between some of them, as well as the lack of real wish and readiness in the European Union itself to move to concrete accession negotiations with these countries. The European Parliament’s once again confirmed interest in the EU accession of the Western Balkan countries, in the absence of specific intentions on its part to start negotiations with them, is that maximum they can count on today from Brussels in terms of their European integration.