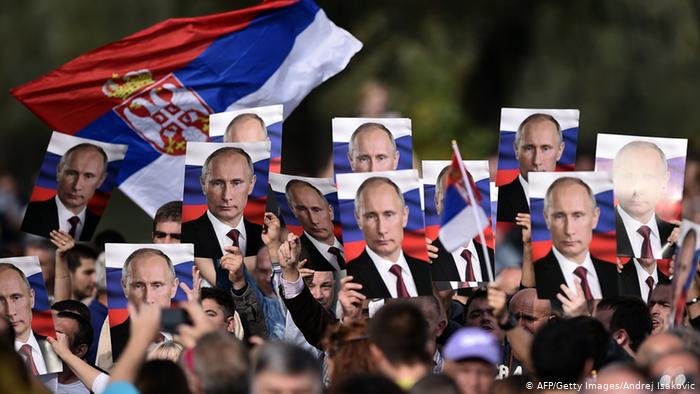 What Russia Wants In The Balkans

Popular narratives on Russia’s geopolitical interests in the Balkans point to two rather divergent directions. One of them, inherited from the 19th-century strategic thought, says that Russia, as a landlocked empire, must expand into the Balkans, so as to gain access to the Mediterranean Sea. According to this narrative, the Balkans is treated as an empty space, regardless of the ethno-religious identity of the inhabitant population. The other one, which can be traced back to 19th-century romanticist pan-Slavism, but which has been popularized in its present form after the publication of Samuel Huntington’s theory of „the clash of civilizations“, says that Russia conceives of its influence in the Balkans through the cultivation of fraternal relations with the region’s Orthodox Christians, using common religious identity to project its geopolitical ambitions.

Facts on the ground, however, do not support either. Russia’s influence in the region, from the early 19th century to the present day, could never compete with the influence of the Anglo-French axis, exercised through the channels of Serbian and Greek nationalisms, constructed on the anti-Ottoman/anti-Islamic and anti-Habsburg/anti-Catholic foundations, in accordance with strategic interests of the two West European powers to dismantle the declining empires and transform them into a number of weak nation-states. Although these nationalist movements used Orthodox Christianity and a popular folklore motif of fraternity with Orthodox Russia as effective tools for mobilizing the targeted populations on the anti-Islamic and anti-Catholic grounds, their elites always remained clearly detached from Russia, being continuously oriented towards their true patrons in London and Paris.

The Russian motive in mobilizing Serbian nationalism in the 1990s was, of course, quite convenient for London and Paris, having concealed their continuous support to the Serbian military invasion of Bosnia and Croatia, which produced a gigantic campaign of ethnic cleansing of the non-Serb population in the occupied areas, with more than 100.000 dead and over one million expelled. That was one of the reasons why the British propaganda, both diplomatic and public, insisted on the alleged Russian support to Serbia and its military expansion as a reason why the Western powers could not intervene in the war in Bosnia and prevent further bloodshed. Another reason, much more important from a strategic point of view – indeed, the reason why the Serbian campaign of genocide and ethnic cleansing was supported by London and Paris in the first place – was the global promotion of Hungtington’s theory of „the clash of civilizations“ as „the next pattern of conflict“. According to that pattern, future geopolitical blocs would be formed on the basis of religious identities, acting as „civilizations“ in ineradicable conflicts. As a model of such conflicts at a micro-level was the one launched in Bosnia, in which Catholics, Muslims and Orthodox Christians were pushed to the point of mutual extermination, in an attempt to form „ethnically cleansed“ areas. This scheme was imposed on these communities’ self-appointed leaders (Izetbegović, Karadžić, Boban) by the European Community’s negotiator Lord Carrington at the conference held in Lisbon in 1992, several months before the war. The widely promoted narrative of the alleged Russian support of the Serbian aggression on Bosnia, and the alleged pan-Islamic support to Bosnia’s defenders (with the deliberate media characterisation of all Bosnians, whatever their religion, as „Muslims“) served the purpose of transforming the world into one of clashing „civilizations“. The ultimate goal was to generate an analogous conflict between Orthodox Christians and Muslims on the macro-level, which would eventually push Russia into a lasting armed conflict with the former Soviet republics populated by Muslims, and then into a global conflict with the rest of the Islamic world. Needless to say, such a development would have created a significant strategic advantage for the Anglo-American powers and a great strategic loss for both Russia and the Islamic countries.

Yeltsin’s foreign policy at the time did not show too much understanding of that geopolitical game, allowing for a public image of Russia as a promoter of pan-Orthodox ideology and a sponsor of the Serbian aggression in the Balkans. However, it must be noted that Russia was not drawn into any major conflict that would fit the pattern of Hungtington’s „clash of civilizations“, although the local conflicts in Chechnya and Nagorno-Karabakh, in which it was directly or indirectly involved, did possess some elements of that model. In contrast, Putin’s foreign policy was based on a much deeper understanding of global relations and geopolitical games at play, so that eventually the Anglo-American strategy of drawing Russia into inter-religious conflicts in Central Asia, in line with Huntington’s theory, did not bear much fruit. And so did the constructed image of Russia’s involvement on the Serbian side gradually wither away.

Yet, paradoxically, in the last couple of years Russia has played the role, previously insinuated by the Anglo-American propaganda, of a protector of Serbia’s efforts to create a Greater Serbia out of the territories of the neighbouring countries with a Serb ethnic minority population (Bosnia, Montenegro, Kosovo).It is difficult to imagine anything more destructive for a country, which is a home to more than 190 ethnic groups, than to adopt the principle of ethnic and religious homogeneity. However, contrary to the principles of ethnic diversity applied in its own territory and in the broader area of the former Soviet Union, Russia’s attitude in the Balkans has shown open support to the Greater Serbian programme of uniting all Serbs into a single, ethnically homogenous state. Russian foreign policy of open support for the Serbian efforts to cede the Serb-populated renegade province of Bosnia to Serbia is self-contradictory, to say the least. It is also self-defeating, if taken seriously and applied to Russia itself and the neighbouring countries with a Russian ethnic minority. Can anyone imagine today’s Russia in permanent efforts to cede parts of all post-Soviet republics populated with Russians, so as to unite them in some mythical Greater Russia? Or, can anyone imagine Russia attempting to ethnically cleanse its own territory, so as to expel or exterminate all those 190 ethnic communities, in the name of an ethnically homogenous Russian nation-state? Of course not. Yet, that is precisely the policy of Serbia towards its neighbours and towards its own population that Russia now openly supports on the international scene. Therefore, one has to rightfully ask, what is it that Russia wants in the Balkans?

In the first place, it is highly questionable how influential Russia really is in Serbia, despite its public support for it. For, the very existence of Serbia, from a semi-autonomous principality within the Ottoman territory in the 1830s to the creation of the Kingdom of Serbia in 1882 , to its expansion into other South Slavic territories in the form of the Kingdom of Serbs, Croats and Slovenes (later, the Kingdom of Yugoslavia) at the Versailles Conference in 1919, always had explicit support by London and Paris. The dissolution of the communist Yugoslavia, which Serbia used as a convenient opportunity to implement the Greater Serbia programme, was also clearly backed by London and Paris, with no relevant participation by Moscow. Under these conditions, it is difficult to imagine a strategic shift from the centuries long Anglo-French influence to that of Russia. It is also difficult to identify Russian strategic interests in the Balkans, given that Russia’s foreign policy was not designed to exert control in the zones outside the territory of the former Soviet Union.

Yet, if Russia has no real influence on Serbia, then the current Russian support of Serbia’s continuing hostile policy towards its neighbours may well be a simulation of influence. Even if such a simulation cannot deceive the foreign policy circles in London, which are quite familiar with the extent of their long-term control over Serbia, it may well deceive such circles in Washington, which are commonly persuaded that Moscow’s influence can be detected everywhere. For what purpose? If the Balkan region is of strategic importance for the US, not only as a link between the West and the Middle East, but also in terms of its natural resources (e.g. Kosovo), then the simulated Russian influence in the Balkans might serve as a leverage against the American influence in the zones of true strategic importance for Russia. What first comes to mind, of course, is Ukraine and its aspirations to join NATO: if a tactical simulation of Russian influence in the Balkans, as a zone of traditional strategic influence of the West, turns out to be successful, then it might be possible to push Washington to reduce its ambitions in Ukraine and leave it outside NATO structures.

There is also another purpose for which such a simulation might serve. Not so many analysts, diplomats or politicians are aware of the tacit strategic alliance between Russia and Turkey, which has elevated Turkey to the status of a great power. This alliance has already been tested in Libya, Syria, and Nagorno-Karabakh. In Libya, Russia and Turkey simulated a possibility of mutual military confrontation, each supporting one of the warring parties, while in reality they agreed to divide the spheres of influence, using the Libyan warring parties as their respective proxies. In Syria, under the pretended confrontation, the new allies also divided the spheres of influence. Still, the most interesting game was played out in Nagorno-Karabakh, where Turkey openly supported Azerbaijan in its efforts to restore sovereignty over this region. On the other side, Armenia was persuaded by Western powers, namely France, to go into the war over Azerbaijan’s region under the pretext that Russian military support to Armenia was a geopolitical inevitability. However, Azerbaijan, with Turkish military support, took the region over, with no resistance on Russia’s part. Russia thus returned to the principle of inviolability of post-Soviet borders and finally abandoned the principle of ethnically homogenous greater states, advocated by Armenia and its patrons in Paris and London. Is there a possibility for Russia and Turkey to play a similar game in the Balkans? Is there a possibility that Russia and Turkey want to generate an illusion among the Serbian nationalist elites that Russia would unquestionably support their attempts to cede parts of Bosnia and Kosovo, at the same time leaving Turkey with a free hand to extend its military support to Bosnia’s and Kosovo’s efforts to prevent Serbia from questioning their sovereignty? Is there a will in Russia to return to the principle of inviolability of borders in the Balkans, too, thereby abandoning the principle of ethnic homogeneity advocated by Serbia and its sponsors in London and Paris, the most harmful principle for Russia’s own interests? Is there a will in Russia to follow its own geopolitical interests, in cooperation with Turkey, along the same lines and with the same implications as in Nagorno-Karabakh? Really, what is Russia doing in the Balkans?