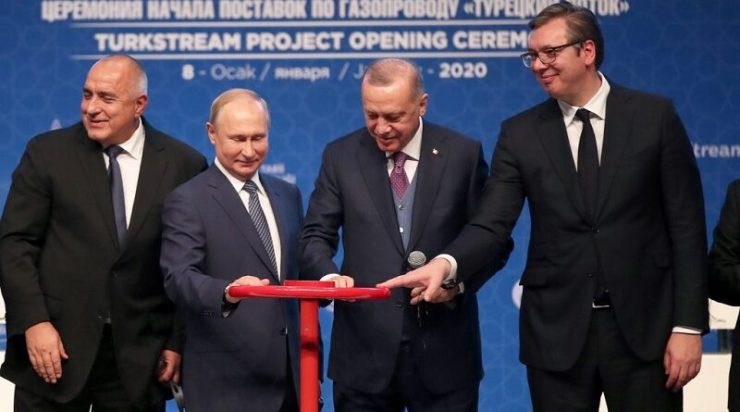 To not alienate voters, natural gas prices are likely to shoot up on the day after the elections

Bulgaria’s prime minister Boyko Borissov brags about his gas pipelines. He’s got a case, achieving more than Chancellor Merkel. He managed to see through the Turk Stream while she is still struggling with Nord Stream and the prospects are not comforting.

Turk Stream, as a target of potential US sanctions, has been detached from Nord Stream. Ukraine’s leadership has toned down its grievances on Turk Stream, essentially muting them. The US establishment is struggling with an overwhelming strategic risks agenda to identify the optimal cost-benefit and cooperation-alienation mix in relations with Turkey, while containing Russia in the Black Sea and Central Asia.

In recent weeks, just in line with the established routine, whenever the Bulgarian PM needed a counterweight to balance his heavy pro-Kremlin tilt with the Turk Stream, a spy scandal breaks out. The pattern works flawlessly – to dump geopolitics – launch a spy balloon.

The expulsion of Russian diplomats is the least painless as replacements will arrive quick. The networks of Russian special agents remain intact. The problem looms larger for the Bulgarian embassy in Moscow, which has replaced half of its staff in the last few months. For the Russian embassy in Bulgaria, 7-8 diplomats are a negligible percentage.

The verbal volleys of Prosecutor General Ivan Geshev do not equal, nor follow court convictions. They remain at the level of Ivan Geshev’s staged digital show displaying super-secret exhibits from suspects’ surveillance. Some rhetorical fireworks, which made fuss and left the audience in the dark on the details.

Borissov keeps pursuing his strategic goals, having received unconditional and quick support from NATO HQ, the United States and Great Britain. That’s all he needs – a PR cover-up.

The white noise that spy stories generate disguise the fact that Bulgaria grew more dependent on Gazprom, with the latter’s share in the country’s gas market reaching record heights. Russian gas monopoly is alive and well, controlling blocking shares of BTG’s transit capacities, turning the country into a Russian gas fortress, denying its competitors access to its neighbors and a level playing field.

Neither Azeri, LNG, or any other competing with Russian gas can cross Bulgaria to Serbia, North Macedonia or Romania.

The Government and the TSO’s management allege this is the national interest!?

Let’s look into this fallacy – whether the national interest rest with all Bulgarians directly or indirectly affected by cheap gas prices or the few at the top of BTG.

Over the years, a dozen politicians, business executives, government officials have been creatively motivated by Gazprom, developing a vested interest in protecting its market shares in the region.

Logically, selling more and only Russian gas expands the ‘motivation’ resource pool, which explains why the country trails other SEE neighbors in the pace of market liberalization and diversification—the more expensive the gas, the greater the returns.

The ‘incentive’ base in Bulgartransgaz is broader and more profound. Suffice it to apply to Balkan Stream the pipeline construction prices per kilometer in EU averages, including the IGB ones, after accommodating the differences /difficulty of terrain, diameter of pipes, compressor stations, etc./. Balkan Stream’s cost should dive in half, indicating the project’s potential corruption cushion.

Bulgartransgaz’s debt/equity ratio prior and after completing the Balkan Stream has skyrocketed from 8 to 67 per cent, negatively reflecting on its market value. The EBITDA multiplier has shrunk as the increase (most of it hypothetical) in revenues as a percentage does not match the tangible debt leap. On top of that, the ostensible increase in Balkan Stream’s tariffs Gazexport pays is insufficient to cover the minimum levels envisaged in the original feasibility study. BTG has since been laboring over the supporting methodology, leading ACER to suspect that its management seeks ways to cross-subsidize the revenue shortage, hiking tariffs for its competitors on alternative exit/entry points. Moscow relies on corrupt officials and the West leniency, which seem in ample supply.