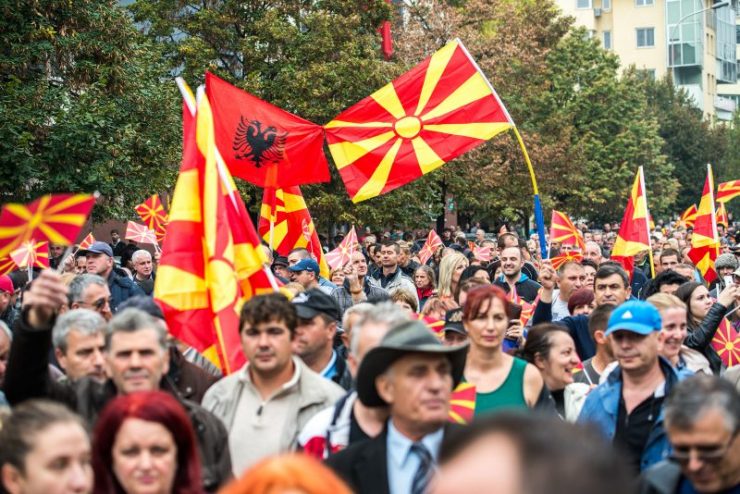 One more important conflict-generating problem in the Balkans is the political activity of the Albanian national minority, which compactly lives in the Macedonian regions bordering on Albania and Kosovo. The active growth of the Albanian population on the territory of North Macedonia, as well as the aggravation of contradictions between the Macedonian and Albanian populations, activates the nationalist forces of the Macedonian Albanians to participate in the promotion of the idea of “Greater Albania”. This brings closer the next phase of geopolitical transformation in the west of the Balkans after the “independence of Kosovo”, – the absorption of a significant part of Macedonia by the “Albanian factor”.

With the respect to the significant number of ethnic Albanians, Macedonia provided guarantees for the provision of necessary rights and freedoms to the Albanian population as a national minority with the adoption of the Constitution of Macedonia in 1991.

In addition to the general provisions that guaranteed the fundamental rights of minorities, Macedonian legislation has provided minorities with broad rights in all other areas of public and political life, taking into account the principle of proportionality. The right to receive free education in their native language was guaranteed, as well as the right to open their own private educational institutions. The publication of daily and monthly newspapers in the languages ​​of national minorities, daily broadcasting of radio and television news and programs in Albanian, Turkish and Serbian languages ​​were provided. In addition, national minorities had the right to open their own private Medias. Also national minorities have always been represented in the structures of the Ministry of Internal Affairs and the Ministry of Defense. The participation of Albanians in the Macedonian army in different years was from 16% to 26% of the total number of soldiers and officers. Also, bilingualism or multilingualism was introduced in local governments in those communities, where representatives of national minorities were more than 20% of the total population of the region.

Thus, the Macedonian state since its independence has fulfilled its obligation to provide national minorities with “fundamental rights” with the regard to international standards. In such conditions, any claims on this issue had no sufficient basis for existence. However, these and some other legislative and administrative measures, unfortunately, turned out to be insufficient to resolve the issue of protecting the rights of national minorities and were unable to prevent interethnic tensions. Subsequently, they escalated into a crisis between the two largest ethnic groups in Macedonia, which caused clashes between government forces and the new Albanian armed organization – the National Liberation Army in 2001. The active participation of international representatives in stabilizing the situation in the country led to the conclusion of the Ohrid Framework Agreement.

As a result of the Agreement, the model of classic unitary state (where the Macedonians were recognized as the state-forming nation) was replaced by the model of decentralized state with clearly dividing lines between ethnic groups. Albanian political forces increased their influence at the local level and gained more leverage over the Macedonian parliament. A broad coalition in government was established with the participation of Albanian parties. Also, national minorities actually received the right of veto on the most important issues for themselves in the Macedonian parliament thanks to the introduced system of “double majority”. According to this system issues affecting the key interests of national minorities must be adopted by a majority vote of all parliamentarians and at the same time by a majority vote of deputies representing the interests of national minorities. In addition, the agreement provided a transition to a proportional electoral system due to which, small parties representing the interests of Turkish and Serbian communities had a chance to get more seats in the parliament.

The Ohrid Agreement is considered to be a model for resolving the ethnopolitical crisis and for the formation of a binational state, the result of the constructive activity of representatives of the Albanian and Macedonian parties under the leadership of the Macedonian president. It was supposed to lead to the crisis resolution and creation the conditions which are necessary for the peaceful coexistence of the Macedonians and Albanians. However, in reality, the agreement appears to be nothing more than the so-called “normative illusionism”. After the signing of the Ohrid Agreement, various separatist groups did not stop trying to destabilize the security situation in the country. For example, in 2010 there was a skirmish between law enforcement officials and the separatists near a checkpoint on the border of Kosovo. In 2012, 5 ethnic Macedonians were killed near the Lake Smilkovtsi. Representatives of the Albanian community were charged with the murder. Continuous incidents of violence on an inter-ethnic basis provoked a wave of disorders in the country. In 2015 there were deadly clashes between the units of the Ministry of Interior and Albanian separatists near the town of Kumanovo. Eight officers and 14 gunmen were killed in the fighting.

The aggravation of interethnic relations even after the signature of the Ohrid Agreement is largely due to the fact that the Agreement itself was a compromise. Therefore the ethnic Macedonians and ethnic Albanians interpreted the provisions of this agreement with the regard to their own interests and ideas. For the Macedonian, the Republic of Macedonia continued to be the nation state of the ethnic Macedonians, while the Albanian political forces sought to fully decentralize the country. Albanians believed that the Ohrid Agreement is only a first step towards extending rights of Albanians, but is not the treaty that can put an end to all disputes.

In the field of interethnic relations, even 20 years after the signing of the Ohrid Agreement, mutual mistrust and stereotypes persist. Albanian leaders have decided that the Agreement is outdated and requires a substantial revision. So, in 2017 the so-called Tirana Platform was signed. The document required the introduction of the Albanian language as a second official language throughout the entire territory of Macedonia, changing the national flag, anthem and emblem as well as national currency in such a way that they reflect the Albanian national identity, raising the status of the Albanians to the level of a “constitutional people”. Some of these requirements have already been fulfilled.

The Albanian community is already actively strengthening its position in the system of the state power in North Macedonia. Under the terms of the coalition agreement between the Social Democratic Union of Macedonia (SDU) and the Albanian Democratic Union for Integration (DUI), a representative of the Albanian community will receive the post of prime minister 100 days before the next parliamentary elections. Furthermore DUI controls six ministerial posts in the current Government of North Macedonia. Three of them are the key posts of Ministers of foreign affairs, economy and finance. So, now Ministries of Foreign Affairs of Kosovo, North Macedonia and Albania are led by ethnic Albanians.

Under the other circumstances such political steps could be welcomed as a movement towards more consistent protection of the rights of national minorities in North Macedonia. However, against the background of the strengthening of the Albanian political forces in the state structures of the country, there is no reconciliation between the Macedonian and Albanian communities, the level of interethnic tension remains high. Moreover, North Macedonian diplomacy that is headed by Albanian can be changed significantly. This will lead to the collapse of the relations with Serbia and deterioration in the shaky position of Macedonia in the negotiations with Sofia.

In this regard, the “Albania factor” which is considered to be the ever-present danger in North Macedonia continues to grow. It raises new questions and other potential problems and also may lead to the intensification of separatist movements and the creation of an updated version of “Greater Albania”.