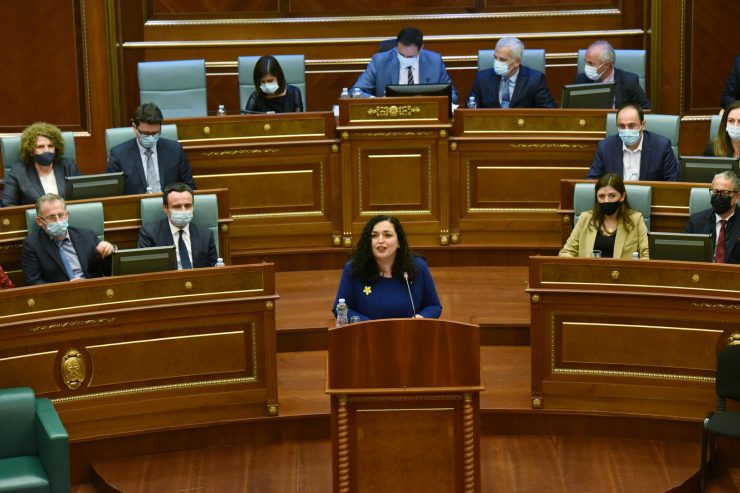 Vjosa Osmani, a 38-years old former parliamentary speaker was elected as a next President of Kosovo last Sunday. The 120-seat parliament gave 71 votes to Osmani, but it was not an easy way to her. Elections were boycotted by two opposition parties and Serbian MPs from Serbian List. Only third attempt of voting was successful, with two previous fall due to lack of MPs. If she hadn’t been elected, Kosovo might have faced another snap election.

The position of President became vacant in November 2020 after Hashim Thaci resigned over war crimes charges at a special court based in The Hague. According to national legislation Osmani, who previously served as the speaker for Kosovo’s parliament, took over the presidential role.

Vjosa Osmani has a degree in law with international experience. She has entered Kosovo politics as an adviser of the then president Fatmir Sejdiu from the centre-right LDK and was part of the Commission for drafting Kosovo Constitution. She was part of Kosovo team which defended the declaration of Kosovo independence at International Court of Justice in 2009-2010, which ruled that the declaration, contested by Serbia, did not violate the international law. An international law expert, Osmani was firstly elected to parliament in 2011 with the LDK and was the party’s candidate for prime minister in the 2019 parliamentary election. So she was one of the senior officials of the Democratic League of Kosovo.

But she quit the LDK in 2020 and collaborates with Albin Kurti and his left-wing Self-Determination Movement, or Vetevendosje. On February 14 Vetevendosje won the snap election in a landslide. Later Albin Kurti was promoted as a Prime Minister.

Osmani had the backing of Vetevendosje on her Presidential run, so the party now holds the three top posts in Kosovo: the president, the speaker and the prime minister. So it’s a good opportunity for opposition to criticize new power.

She remained an immensely popular figure with high support of Kosovars. Osmani is also seen as a role model for women in the mostly patriarchal Balkan country.

In her first speech as a President Osmani emphasized importance of dialogue and normalization of relations with Serbia, but said Belgrade  must first apologise for war crimes committed during 1998-1999 war. “Peace would be achieved only when we see remorse and an apology from Serbia and when we see justice for those who have suffered from their crimes,” Osmani said. It seems that Osmani would become a main negotiator with Belgrade, as well as with Brussels and Washington. Foreign policy is one of Presidential narrow responsibilities. Also negotiations with Serbia are not on the top of acting Kosovo Prime Minister Albin Kurti, but Osmani has good experience and background to improve it.