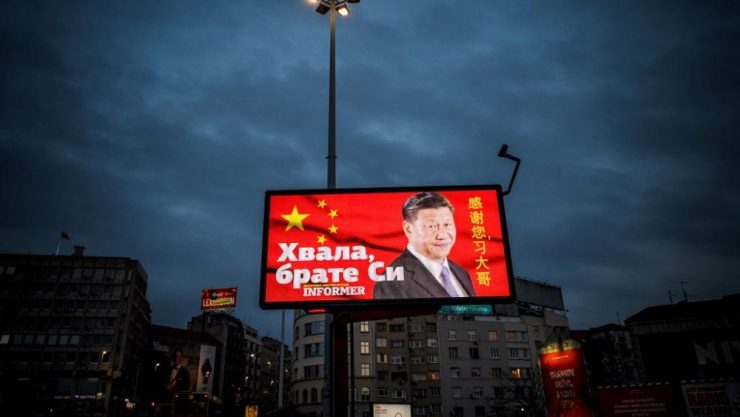 While the U. S. administration is trying to gather global coalition against China’s autocratic regime and its economic expansionism, the President of Serbia hails “steel friendship” with Beijing and calls China’s leader Xi Jinping “not only a dear friend but a brother.”

“I won’t criticize China which is a very friendly country,” Aleksandar Vucic said recently during a tour to the highway construction site, one of numerous projects financed by Chinese loans.

Serbia is recognized as key partner for Chinese Belt and Road Initiative not only because of its topography as a main route from Greek ports toward Central and West Europe, but also because it has established close relations with such a local strongman as Vucic is and the fact that the Serbian government doesn’t ask questions regarding the China’s “Take It or Leave It” model and therefore isn’t subject to the bloc’s strict rules.

Serbia, like other countries of Western Balkans, is hungry for a much-needed capital – and second world economy with its huge investment funds appears to be savoir of Serbian national economy, which is stressed by high unemployment rates and an outdated, uncompetitive industry. The People’s Republic filled the vacuum created by the EU which is healing wounds from series of crises: from financial, to the migrants, Brexit and pandemic.

The investments were accompanied by massive Chinese lending, high-level political meetings, and the procurement of Chinese arms. In 2019, Serbia even invited Chinese security forces to participate in joint exercises.

The popular Serbian national football Super Liga has been renamed after the Zrenjanin-based Shandong Linglong Tire Co. Ltd., which aims to be one of the biggest tire suppliers for the European car industry. The € 800 million factory was declared by the Serbian government a project of national importance.

Еру Beijing’s business as usual on the New Silk Road means a lot for the small Balkan country. The high-speed rail line between Belgrade and Budapest, which worth billions in loans from China and Russia means Serbia will have direct link to one of the biggest markets in the world: the European Union. But at what cost?

According to the Serbian government, Chinese “investments” amount to €10 billion in recent years. But the Central Reserve Bank’s data up until 2019 shows only €1.6 billion of that at hand — a fraction compared to investments from the EU.

Critics believe that the Chinese have not been investing at all, but that they merely lend the money for the construction projects. The contract is then awarded to a Chinese company and these are the Chinese workers who work on the construction sites. Neither business decision nor its legal basis was explained or made public, and it is unclear whether the move allows the project to effectively circumvent Serbia’s legal framework. Because of the project’s special status, the investor was exempted from paying fees to redesign agricultural land for construction.

This is just one of the examples how business with China is done. Belgrade is removing any obstacles like land, transport, tax policy, and work visas. China brings in its own workers rather than hiring Serbs. Serbia pays higher interest rates to Chinese banks than those charged by European Bank for Reconstruction and Development and being an EU candidate country accepts the terms of contracts without tenders, which is contrary to the EU practice.

China is gradually weakening the Serbian legal system. Its business activities increased the number of loopholes in the law, which made exceptions for highly polluting large-scale infrastructure investments, predominantly by Chinese enterprises or financed by Chinese state loans.

Several new Serbian laws and procedures have made it easier to make investments under the radar. One of these is the 2019 law on public procurement, which has weakened the regulations on competition regulation, access to public information and environmental protection.

The other one is the February 2020 law on “special procedures.” This legislation makes it possible for the government to earmark infrastructure projects as urgent, and therefore ignore the procedural regulations for public procurement. Instead, they are subjected to special procedures, because they provide strategic partnerships in projects of particular importance to the Republic of Serbia – such as China’s Communications Construction Company €450 million project of 30-kilometer highway in central Serbia.

“We have no insight into how the money is spent since Chinese companies are protected like polar bears by a bilateral intergovernmental agreement,” Marinika Tepic of the opposition Freedom and Justice Party said.

Beside high politics, Serbian citizens are suffering from pollution of Chinese Serbia-based companies despite their record of flouting environmental rules. Investors and lenders failed to carry out environmental and social impact assessments.

No information has been made available on the implications the Linglong factory could have for public health, the environment, and the safety of workers. The contract was signed without compliance to the law which requires environmental impact assessment to be done before the building permission. Similar behaviors have been observed in several other investments involving Chinese actors in Serbia like a steel mill in town of Smederevo.

Serbian government has enthusiastically welcomed Chinese companies like Zijin Mining Group which in 2018 took control of a state-owned money-losing copper smelter in the city of Bor and began blasting away on the nearby hills in search of copper and gold. Pollution from the plant skyrocketed many times the legally permitted level and set off a series of street protests, but the authorities in Belgrade are happy, because Bor now accounts for a stunning 80% of Serbian exports to China.

„China is operating in Serbia the same way it did in Africa — it has the same strategy,” said Dragan Djilas, a businessman and former Belgrade mayor who now leads Serbia’s biggest opposition party.

In January, 26 members of the European Parliament demanded a review of the “growing impact of China’s economic footprint in Serbia,” including “reckless projects with potentially devastating multiple impacts on the wider environment as well as surrounding population.”

The government rejects anything that might upset China and its investors. The Serbian government often declares projects, particularly Chinese investments in polluting industries, to be of national interest so that it can apply laws flexibly. Further, the government authorities often deny requests for information that are made in whole or in part under the Law on Access to Information, thereby blocking citizens and civil society from holding the government accountable.

Being confident in having the support of Mr. Vucic and his officials, the mining company and other Chinese ventures in Serbia have mostly ignored complaints and shrouded their operations in secrecy.

“The investor can want what he wants and apply his tactics,” Nemanja Nenadic, the program director of Transparency Serbia said. “The problem here is more the question of what the state bodies are doing and whether they have done their part in protecting the public interest.”

Letting them to do whatever they want to do, one can say that Chinese are as guilty as Serbian authorities who, as President Vucic said, are not ready to criticize “Chinese brothers” and “fantastic” joint infrastructure projects.

China has not only invested hundreds of millions of dollars but also provided 2.5 million of doses of Covid-19 vaccines. “The only ones who can help us,” Vucic said. Beijing’s “mask diplomacy” and anti Covid-19 vaccines are used for promotion of efficient, but highly centralized and totalitarian political system. Even the harshest critics of President Vucic and his love for China have fallen silent in recent weeks as Serbia is vaccinating much faster than the EU countries.

How many dozes were exported along with the political influence? The Chinese telecommunications giant Huawei has installed hundreds of surveillance cameras equipped with facial recognition technology around Belgrade, which, according to the government, will help to reduce the crime. But privacy advocates say they are used to identify and deter protesters and show how Mr. Vucic is using China to advance what critics see as a steady reduction of freedoms.

It is obvious that Serbia in last years is distancing from the West and getting closer to Moscow and Beijing. President Vucic could expect more pressure. US President Joe Biden called on the EU leaders for joint action in foreign policy, especially regarding China and Russia. The US administration’s stance was motivated by the strategy and geopolitical interests of the EU and the US in the Western Balkans, which coincide largely, especially regarding the “EU integration and its economic and political order halting the spread of Chinese and Russian influence.”

So, it’s not only Biden who is warning against rising influence from the East. A recent European Parliament resolution shed light on Serbia’s love affair with one of the world’s most repressive countries, and expressed concerns about Beijing’s increasing influence on Belgrade.

The lack of transparency in Chinese investments and loans was of particular concern. The European Parliament called on Serbia to strengthen its legal compliance standards for Chinese business activities, and sent a warning to Belgrade that its behavior is jeopardizing the country’s European accession process.

The countries of Central and East Europe are becoming less enthusiastic toward China. It could have been seen at virtual summit of 17+1 Group (12 of them are EU members) which was presided by Chinese leader Xi Jinping. But not Serbia.

There is a whit of fear that Serbia as a pilot project of the Chinese on their march to Europe. Serbia once had Big Brother in Moscow. Now his name is Beijing.