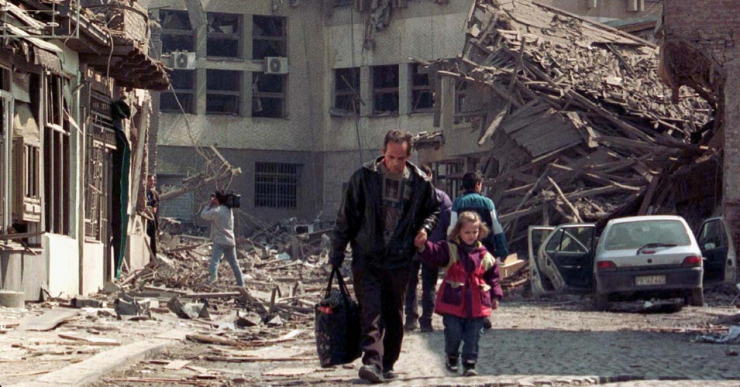 In the twenty-first century, legal merits of a state’s decision to use force and the actual implementation of such a decision are categorically and strongly criticized and causes concern of the international community.  Judicial bodies are increasingly reviewing decisions on the use of force and other forms of hostilities, including such international incident as the NATO bombing campaign against the Federal Republic of Yugoslavia, known as Operation Allied Force (OAF). It has been and continues to be the subject of close attention in various international institutions, including international courts.

The most notable, at least among judicial investigations, is the case at the International Court of Justice (ICJ), which assesses the legitimacy of the OAF. In general, the practice of the ICJ is understandable due to its wide discussion and interpretation. However, the ICJ considers disputes on violation of the requirements of international law only between states. So in this case the practice of the European Court of Human Rights (ECHR) seems to be more interesting, as it makes available a judicial mechanism to provide enforceable and effective justice to individual victims of human rights violations.

In a separate case, several family members of individuals killed during NATO’s attack on the Serbian television station (“RTS”) filed a claim entitled “Bankovic and Others v. Belgium and 16 Other Contracting States” at the ECHR. The application was brought by six people living in Belgrade, Serbia, against 17 NATO member states. Applicants complained about the bombing of the headquarters of Serbian Radio and Television station in Belgrade as part of NATO’s air strike campaign during the Kosovo conflict, which damaged the building and killed several people. The court declared the application inadmissible. It found that, while international law did not exclude a State’s exercise of jurisdiction extra-territorially, jurisdiction was, as a general rule, defined and limited by the sovereign territorial rights of the other relevant States. Other grounds of jurisdiction are exceptional and require special justification in the specific circumstances of each case. The Convention is a multilateral treaty that operates mainly in a regional context, especially in the legal space of the Contracting States. Yugoslavia clearly did not fall under this legal space. The court was not convinced of the existence of any jurisdictional link between the victims and the respondent States.

The second case on this matter is “Markovic and others v. Italy”.  The application concerned an action in damages brought by the ten applicants, nationals of the former Serbia and Montenegro, before the Italian courts in respect of the deaths of their relatives as a result of air strikes by the NATO alliance. They alleged, relying on Article 6 (right to a fair trial) read in conjunction with Article 1 (obligation to respect human rights) of the Convention, that they were denied access to a court. The Court held that once the applicants had brought a civil action in the Italian courts, there indisputably existed a “jurisdictional link” for the purposes of Article 1 of the Convention. However, the Court found no violation of Article 6 (right to a fair trial) of the Convention, holding that the applicants’ claims had been fairly examined in the light of the Italian legal principles applicable to the law of tort.

Other interesting cases are “Behrami and Behrami v. France” and  “Saramati v. France, Germany and Norway”. The first case concerned the detonation of a cluster bomb in March 2000 – dropped during the 1999 NATO bombing. The bomb was founded by playing children and killed one boy and seriously wounded another. The applicants complained, relying on Article 2 (right to life) of the Convention, that the death of one boy and the injuries of the other were attributable to the failure of the French troops of the international security force in Kosovo (KFOR) to mark or defuse the undetonated bombs.  The second case concerned the detention by KFOR of a man from Kosovo of Albanian origin, who was suspected of involvement with armed groups operating in the border region between Kosovo and the Former Yugoslav Republic of Macedonia and assumed to represent a threat to the security of KFOR. He complained that his detention, between July 2001 and January 2002, violated, in particular, Article 5 (right to liberty and security) of the Convention. The Court declared the applications inadmissible. It found that the supervision of demining in Kosovo fell within the mandate of the UN Interim Administration for Kosovo (UNMIK) and the issuing of detention orders fell within the security mandate of KFOR, hence the UN. The UN had a legal personality separate from that of its member states and was not a Contracting Party to the Convention. Since UNMIK and KFOR relied for their effectiveness on support from member states, the Convention could not be interpreted in a manner which would subject Contracting Parties’ acts or omissions to the scrutiny of the Court. To do so would be to interfere with the fulfillment of the UN’s key mission to preserve peace. The Court concluded that it was not necessary to examine the question of its competence to hear complaints against France about extra-territorial acts or omissions.

Moreover, there is no decision in which the Court has made value judgments about any international conflict or internal disputes in terms of matter. At first glance it may seem that the Court is ineffective in resolving cases relating to armed conflict situations. However its jurisdiction, as required by the Convention, allows only the supervision of States’ compliance with the obligations they have undertaken under the Convention and the Protocols. The Court is well aware of its role in saving Europe from the scourge of war, tyranny and oppression, but there is a line it cannot cross.