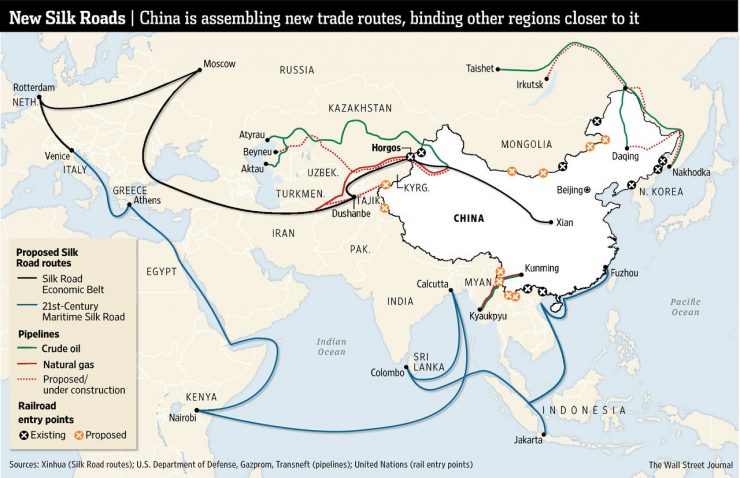 China’s Quad: A Mirage or a Reality

The politics of alliance can trace back to the ancient times of the East and the West. Since it affects individual states’ core interest and security, politicians seek alliance partners to meet their challenges and the gains they can expect from the alliance. Since the end of WWII, the ruling elites in the United States have argued for its superiority in the military, whereas pooling the largest allies in the world. Now seeing the rise of China as a strategic rival in the 21st century, the U.S. has earnestly pushed a “Quad” along with Japan, Australia and India in the Indo-Pacific, aiming to contain the rise of China geopolitically. It leads to an inquiry into how the Beijing leadership reacts to the containment schemed by the U.S.?

The United States has been the most powerful country globally for nearly 80 years. Yet, it has all the time indulged itself in the mandate calls for “American First,” such as; it must maintain its superiority rather than “parity” with anyone, including China and Russia. Given this, Washington has opined China’s efforts to modernize and professionalize its military as a strategic threat in Asia and the Pacific. On March 12, the first summit among the U.S., Japan, Australia, and India showed quadruple-collective security, which led to one major launch of a working group on critical and emerging technologies to facilitate cooperation standard-setting and innovation among the four countries and the like-minded partners. In addition, the British government decided to deploy the largest fleet of the Royal Navy since 1982, heading to the Indo-Pacific region in May to project its image of a Global Britain in the post-Brexit and reaffirms its commitment to addressing the security challenges of the world today and tomorrow.

Yet, just days after the U.S.’s drive for a “Quad” in the Indo-pacific, Russian Foreign Minister Sergei Lavrov made a formal visit to China on March 22 at the invitation of his Chinese counterpart Wang Yi. It reveals the high-level quality of the relations between the two most considerable Eurasian powers since the agenda has covered the dimension of the comprehensive strategic partnership—from diplomacy and defense to economic and high-technologies innovation. Though unready to forge a military alliance at present, China and Russia have been confident in meeting any challenge of the world. On April 24, the announcement that Russia and China would jointly construct a space station on the moon (ILRS) is further a testament to establishing what is termed as the “Sino-Russian alliance in the making.” There is no question that the prospect of the alliance between China and Russia comes from the very awkward diplomacy of the U.S. that has led them deftly to overcome conflicting national interests that should make Beijing and Moscow adversaries on the bilateral, regional and global issues. Rather, recent growing pressure from the U.S. and its allies has further forced the two Eurasian powers to enhance their vibrant relations. In fact, the Sino-Russian cooperation has become operationally more consequential than the frequently touted democratic partners between the U.S. and India, as Graham Allison observed.

If the Sino-Russian strategic partnership has caused a substantial impact on the U.S. relations with the two land powers and international security as well, the solidarity between China and Pakistan has been referred to as “brothers in ironclad,” which has essentially dented India’s leverage in the region including Afghanistan. Since the 1960s, the bilateral ties between the two countries have been transformed into a de facto alliance regardless of the differences in religions and ideologies. Accordingly, cooperation has covered nearly all aspects from politics to economics and from military to foreign affairs over the past decades. For example, Pakistan has committed to a one-China policy. In contrast, China has supported its sovereignty, and Beijing and Islamabad see security issues such as China-aided Pakistan national economic corridor (CPEC) and the peaceful settlement in Afghanistan since the U.S.-led NATO presence in the country as a threat in the region, according to some states, however, within Afghanistan Pakistan is always considered as a peace spoiler.

There are rumors, particularly in the West, that the CPEC is a debt trap for Pakistan, and through its hefty debts, China aims to influence Pakistan and eventually monopolize its economy and even politics in the long run. To the people who believe in the realist doctrines, China, like any other great powers in history, is easily seen to take more geostrategic gains, no matter how Beijing identifies its rise as a peaceful one. Yet, in the international arena, influence does not always come at the expense of others. In China’s security and development strategies, Pakistan has been a vital partner in light of the bilateral friendship over the past decades and its key location in South Asia near the Strait of Hormuz, which links the Middle East. In both theory and reality, alliance or quasi-alliance forms when states have common interests and strong consensus to pursue them. Due to this, the actual reason behind China, and Russia sharing their interests is that all sides have insisted on ending the civil war in Afghanistan through agreements on forming a coalition government with the participation of the Taliban group. Considering this, China which has forged strategic relations with Russia and Pakistan, steadily moves toward a Eurasian bloc including Iran.

On March 27, Chinese FM Wang Yi visited Tehran, which was termed in the media as China’s effort to seek for “an alliance of autocracies”. The two sides discussed signing “the plan for China-Iran comprehensive cooperation” to tape the potentials for enhancing economic and cultural cooperation in the next 25 years. The deal is supposed to promote their comprehensive strategic partnership. Arguably, such a long-term agreement would be able to upend the prevailing geopolitical landscape in West Asia, subject to the United States for so long.

Iran has maintained a de facto alliance with Russia and a strategic partnership with China. It is also reported that Russia and Pakistan have agreed to promote cooperation, including the military one. However, it seems that China is not ready to forge a “Quad” along with Russia, Pakistan and Iran now in a traditional way. The rationale behind this argument is that China knows that there is a trust deficit between  Pakistan and Iran as well between Russia and Pakistan. The latest cooperation plan between China and Iran is essentially a large-scale economic agenda for Iran that has been severely sanctioned by the United States. To that end, China and Iran are sure to support each other on the issues related to their core interest and major concerns, including joint opposition to any hegemon above the U.N. authority. China has urged that the United States should first take a step to lift unilateral sanctions against Iran. As a multilateral protocol, it is opined that all the parties, including the U.S, should observe the Joint Comprehensive Plan of Action (JCPOA). Given this, cooperation among China, Russia, Pakistan and Iran can everywhere outline new geopolitical vectors in the region, however, there are a number of factors that can raise the questions on this Quad as in recent past Pakistan were against USSR block and also had a number of issues with Iran.

Yet, China’s alignment with Russia, Pakistan and Iran is different from NATO or the Quad in the Indo-Pacific driven by the United States. It is self-evident that advancing a traditional “Quad” requires more focus and attention due to the complex interdependence between China and many other countries in the Middle East, including Israel and Turkey. Accordingly, as a rising power, China has a long way to go and learn to ensure its huge demands for oil, gas, and many other natural resources from the Middle East. In light of this, China doesn’t aim to challenge the status quo. Instead, a shared commitment to renewing the long-term mutual respect and equality is an enduring feature of Beijing’s foreign policy over the past decades and will remain so in the years ahead.

Certainly, China has pursued its diplomatic goals following its ancient culture and contemporary vision from the West.

Author: Wang Li, is a professor of International Relations with an emphasis on great powers relations at Jilin University, China. He holds PhD from the UK and post-Doctoral fellow in the U.S. Author can be reached on wlchangchun@jlu.edu.cn

Co-Author: Makam Khan Daim, studying Security, Intelligence and Strategic Studies at the University of Glasgow. He did his M.Phil in International Relations at Zhejiang University. During his student life, he served as Secretary of Foreign Affairs of Afghan students in Pakistan. He worked as an editor in Security Distillery from December 2019 to January 2021. Makam can be reached at makam.daim2@mail.dcu