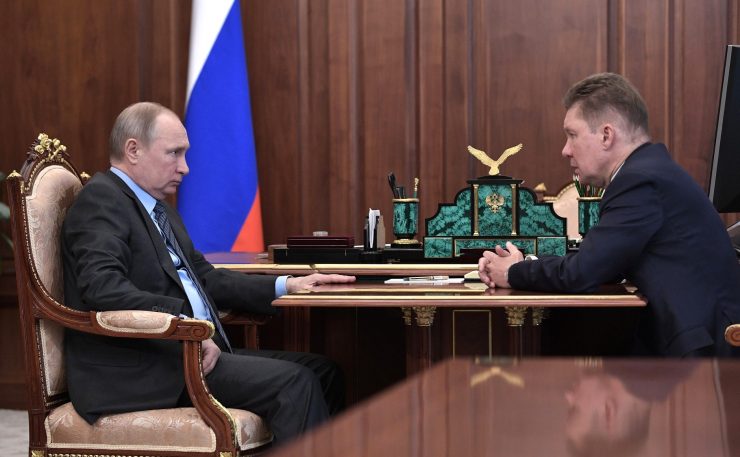 Recent events show that Moscow is no longer hiding the fact that it prioritises supplies to countries that are either friendly or considered important for maintaining the company’s overall market share.

Late June saw a significant non-event. When monthly auctions were held for gas transit capacity through Ukraine in July, Russia’s Gazprom conspicuously failed to reserve any additional capacity. This was despite general expectations of higher supply volumes during the peak season for underground gas storage (UGS) injections, which in Europe begins around mid-year.

The result was consternation—and a spike in gas prices. As an article in London’s Financial Times (FT) noted on July 1st, prices in Europe for delivery in the following month hit €36.90/MWh on that day—surpassing even the previous record that had been set in 2008—while prices in the UK leapt almost 30% in a single day.

With supply already tight, there was talk of “blackmail”, notably from Sergiy Makogon, CEO of Ukrtransgaz, Ukraine’s gas transmission system operator. As cited by the FT, Mr Makogon said that refusal to ship additional volumes via Ukraine amounted to deliberately holding back supplies from Europe and that Russia could have tempered this year’s doubling of gas prices if it pumped more. Moscow’s aim was to force approval of the controversial Nord Stream-2 pipeline, thought Mr Makogon.

The European Commission—chronically soft on Gazprom—was cited by the FT initially as saying that there were “no indications of specific behaviour by any of our suppliers to drive up prices”. But even Brussels was sounding more critical within a few days.

Gazprom protested its innocence: “optimisation” of flows was normal, while it was supplying gas in strict accord with contracts—pre-agreed volumes in full, with additional requests treated on an “if possible’ basis.

And, on July 5th, Moscow-based Izvestia daily ran a commentary by one Alexander Frolov (deputy director of Russia’s National Energy Institute), which simply denied that Gazprom was keeping Europe short of gas. At 99.9 billion cubic meters (bcm), Gazprom’s total export deliveries in the first half of 2021 were 25.7% up on H1 2020 and were, in fact, the second-highest H1 total ever, second only to 101.2 bcm in H1 2018. And the boost in supplies to several European countries was really impressive, Mr Frolov noted, mentioning the following y/y growths in H1 deliveries:

No doubt these figures are correct. But one or two points might be noted:

Of the first four countries mentioned, Germany and France are not only the two pitching for an EU-Russia summit, but also those whose companies are participating in and financing Nord Stream-2. Germany, friendliest of all, registers the highest growth and, indeed, sees a record import volume.  Poland is no particular friend of Russia, but a special circumstance may be relevant: it plans to build an alternative gas connection with Norway and does not intend to renew its old long-term contracts with Gazprom for the supply of Russian natural gas. Conceivably Gazprom might be hoping, by more generous supply, to make the need for this move seem just a little less urgent to Warsaw and contain the spread of Poland’s disenchantment with Russian gas to other CEE countries. And, as to these three countries’ imports of Russian gas, a common factor might be that none of them have access to cheaper Azeri gas, so Russian gas remains ultra-attractive relative to spot market prices.

As to the last five countries listed—Turkey, Bulgaria, Greece, Serbia and Romania—the first three have access to Azeri gas, but that has not pre-empted a substantial surge in Russian gas take-up.

Indeed, Azeri gas supplies, despite their price competitiveness, have difficulty in displacing Gazprom gas even in Turkey, as supplies from Shah Deniz-1—the older of the two developments in the Shah Deniz field—were halted on April 17th, 2021 upon the contract’s expiry. The buyer (Botas) and the seller were unable to agree on terms, though supplies from Shah Deniz-2 have been unaffected, reaching an annual plateau of 6 bcm. Despite growing gas demand in Turkey and a sharp decline in LNG supplies, the gap has been filled mostly by imports of Russian gas via Turk Stream, with Russian supplies reaching a record level of 14.64 bcm in H1 2021.

Shah Deniz gas has faced hurdles in Greece and Bulgaria, as imported volumes are modest at best, well below the 1 bcm annually contracted for each country Azeri gas has effectively displaced LNG, including US LNG (1,5 bcm in 2020) rather than Russian gas, signaling short- and mid-term challenges to the diversification potential of the Southern Gas corridor, as Russia seems able to thwart larger intakes of more competitive Azeri gas. LNG and use of the Ukrainian gas transportation system, using political leverage and legacy supply and transmission contracts.

All this might cast some light on what Gazprom means in practice when it says that additional requests are being treated on an “if possible” basis. Mr Putin himself—the real CEO of Gazprom—has been quite blunt about this, asking publicly why Russia should play against the market and lower the price. The criterion of the “possible” is, apparently, that granting of the request should entail no additional booking of Ukrainian transit capacity. Which is where we came in—except that it is worth noting that it’s not just a question of July: no three-month capacity for Q3 has been booked either.

The Kremlin’s game is fairly clear. Moscow expects that Nord Stream-2 (NS-2) will be completed by the autumn and Turk Stream-2 (TS-2) will be certified by the end of the year. Mr Putin’s hopes are pinned on storage of insufficient volumes of gas due to high summer prices, which he calculates will keep winter gas prices high and make peak demand balancing conditional on NS-2 and TS-2 capacities.

In the interim, due to the high summer prices, Gazprom aims to discourage gas storage in Ukraine and to deprive it of its role as the EU’s gas storage hub and the corresponding revenues. In short, Mr Putin is once again using gas as an energy weapon, profiting from high prices and other countries’ dependencies. Nobody is surprised.

What is surprising, superficially, is how few countries seem to be interested in doing much about it. Poland is an honourable exception: it is reacting to past supply cuts and political blackmail by diversifying sources of supply and building a new Baltic line for direct supply from Norway.

Not so Bulgaria. Its governments have been willingly buying more Russian gas than state-owned gas supplier and trader Bulgargaz is contractually obliged to under the ‘take or pay’ clause, ignoring the much cheaper[USER1]  alternative of Azeri gas.

Bulgargaz deliberately omitted to book additional capacity in the Greek transmission system in Q2 2021, limiting its takeup of Azeri gas to token quantities. Instead, as noted above, it boosted purchases of costlier Russian gas. This was a pretty expensive move: the resultant loss of revenues to the company’s balance sheet for 2021 as a whole can be projected at around $100 million[USER2] , on the basis of volumes of Azeri gas not taken up multiplied by the average price premium on Russian gas*. And that, of course, represents a loss of benefits for the long-suffering customers of Bulgargaz,

That amounts to pretty outrageous conduct on the part of Bulgargaz CEO Nikolay Pavlov. He would not have dared to act this way if he didn’t have political protection. But he seems to have that of Bulgaria’s president Rumen Radev—creator of the current caretaker cabinet—who is shielding him from criticism at present and, incidentally, picked him to serve as energy minister in his first caretaker government in 2017.

But let’s look on the bright side: if continuity is a political virtue, this is a rare instance of continuity between this cabinet and the regime of the previous prime minister Boyko Borisov, who appointed Mr Pavlov CEO of Bulgargaz in 2016. So Mr Pavlov doesn’t lack powerful friends. And his apparent defence of Gazprom’s interests is probably doing him no harm either. Not yet, anyway.

*The calculation is as follows: