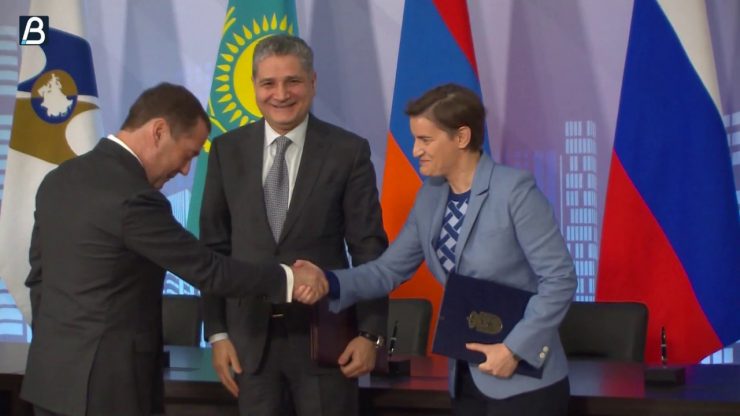 Thanks to Serbia, Russia officially arrived on the threshold of the EU

Continuing to irritate partners in the European Union, Serbia and the Eurasian Economic Union (EEU), with its member states Russia, Kazakhstan, Belarus, Armenia and the Kyrgyz Republic, activated on July 10 mutual agreement on free trade. The pro-Russian elements within the country see this agreement as “historical”, while the others fear that Moscow is thus showing that it is an actor that wants to stay in the Western Balkans.

Thanks to Serbia, Russia and its EAEU officially arrived on the threshold of the European Union leaving Serbia in dilemma between those from the East who accepted it, and those from the West who are waiting Serbia to fulfill the conditions of EU membership.

Serbia was offered to become a part of the EAEU at a time when the European perspective is uncertain, so cooperation with partners coming from the East indicates that an alternative is being considered if the European integration process and membership in the European Union remain on the long run.

Free trade agreement between Serbia and five former Soviet states came into force on July 10 after it was verified on October 25, 2019 in Moscow, signed by Prime Minister of Serbia Ana Brnabic in October 2020 in Moscow and ratified by the parliaments of the signatory countries.

This agreement replaces the previous bilateral agreements with Russia, Belarus and Kazakhstan and expand the free trade zone to Armenia and Kyrgyzstan, which opens a 183-million people market. Also it expands the list of products that Serbian businessmen can export to Eurasian markets and increases quotas for the export of goods that are not subject to customs restrictions.

In 2018, Serbia exported goods worth $1.1 billion to the markets of the EAEU countries, most of which, $1.02 billion – to Russia, which in that year accounted for just over 7% of the total Serbian exports.

According to the Ministry of trade of Serbia, the country’s total trade with five EAEU member states in 2020, which includes total imports and exports, accounted for about 6% of the total Serbia’s trade with the world. The value of trade in that period amounted to $2.7 billion, compared to $45.7 billion, which was the total exchange of Serbia with the rest of the world. Of all the EAEU countries, in 2020, Serbia had the largest trade exchange with the Russian Federation, mainly due to the gas import. With $2.4 billion, the trade exchange between Serbia and Russia makes up 91% of the total exchange with the EAEU.

The volume of Serbian exports to Russia and other EAEU countries is not expected to increase significantly even after the recent entry into force of the free trade agreement, especially given the fact that Armenia and Kyrgyzstan are relatively poor countries with low purchasing power populations.

By the agreement the signatories undertook to liberalize mutual duty-free trade and that the EAEU member states would enable Serbian goods equal access to their markets. This can bring some advantages for certain Serbian producers – food production, wine, brandy, fruit alcoholic drinks, tobacco – but experts are reminding that during the 11 years-long period of bilateral agreement with Russia, Serbia insisted in vain to export vehicles.

In the spring of 2013 Belgrade claimed that Putin personally approved Serbia’s delivery free of customs duties of a contingent of 10,000 Fiat 500L cars to Russia, which had started coming off the production and assembly lines of the Fiat Chrysler factory in Kragujevac some years earlier.

Then Prime Minister Aleksandar Vucic did not give up, so at the end of 2013, he was again with the Russian president to obtain a duty-free placement of the contingent of Kragujevac cars in Russia. Putin said that he would allow that, and again betrayed the given promise. In October 2014, in Belgrade, Russian President promised Serbian leader again in a live TV broadcast that he would finally, by the end of 2015, allow the duty-free export of a certain contingent of Serbian cars to Russia. But that did not happen again. And this will not happen in the nearest future because Serbia-made Fiat car export is again forbidden.

So, what kind of attraction does Russia have with $2.4 billion of exchange compared to Germany with $6.1 billion or Italy with $3.7 billion? Why is Minister Nenad Popovic, a well known pro-Kremlin figure in Serbian government, talking to TASS agency about “historical” agreement at the time when Serbia places two thirds of its exports of goods on the EU market and only 5.7% toward EAEU?

“The agreement will not bring dramatic changes to businessmen in Serbia”, believes Nebojsa Lazarevic from the Belgrade Center for European Policies. In other words, Serbia will continue to export what it exported in almost the same quantities, because there is not much more to export.

What can Serbia get from the East while it risks to anger Brussels? At the summit of EU foreign ministers held in August 2019, European officials criticized Serbia, pointing out that the signing of the agreement with the EAEU distances Serbia from its strategic and long-term foreign policy goal – membership in the EU. Now the new warnings are coming: Serbia will have to terminate the agreement with the EAEU in case of joining the EU. “By the time of EU accession, Serbia must withdraw from all bilateral free trade agreements. This is not a new condition, but a general rule that applies to all candidate countries that want to join the EU. The Government of Serbia has recognized European integration as a strategic priority, and that implies progressive harmonization with the foreign and security policy of the EU,” the European External Action Service’s spokesman Peter Stano said.

The official Belgrade does not deny that Serbia, when it joins the EU, will terminate the EAEU agreement, but it pretends to not understand why now that can damage relations with Brussels. “The free trade agreement with the Eurasian Economic Union does not hinder Serbia’s entry into the EU,” the president of the Serbian Chamber of Commerce Marko Cadez said.

Some analysts claim that the Free Trade Agreement with the EAEU has rather a symbolic character from the economic and political point of view. They note that the agreement is given more political significance than it actually has, although they claim that the West will take Serbia more seriously when they see that it have relationships with others.

“In the global geopolitical game, it is another element on the bowl that turns things in our favor”, a pro-governmental political commentator Dragoljub Andjelkovic said. In fact, it would be so if Serbia was not the only European country (except for those from the former USSR), which joined the Eurasian Economic Union, buys weapons and military equipment or receive them “as a gift” from Russia, which again, under the cover of the so-called military neutrality, makes Serbia the most loyal Russian military-political satellite in Europe.

The general consensus is that, as more time passes, Serbia will progressively harmonize with EU policies because the European Union – not the East – is the country’s irreversible geostrategic option. But, in meanwhile, President Vucic with his zigzagged balancing game continues to be convinced that getting closer toward Russia and China will “wake up” the West and accelerate the EU integration process. This is the risky game for country which is just a paler copy of the authoritarian-dictatorial government in Moscow and Minsk. The EU’s reservoir of patience is not infinite, and the Joe Biden’s administration shows that is not ready to tolerate the Belgrade’s oversized “trips” to the East.

Although it creates the image of not worrying too much about warnings and criticism from the West regarding Serbia’s standing on the Russian-Chinese Eurasian path, the authorities in Belgrade are certainly thinking about it a lot. This is totally different from the situation in Russia, where President Putin doesn’t have any dilemmas. The Kremlin’s strongman knows exactly what he is doing: he wants his Eurasian Union to become a Soviet bloc for the 21st century, while Serbia will be just a pendant for it. The Serbia’s membership in EAEU is a golden opportunity for Russian influence to prepare Serbia for the role that Moscow is preparing for it: to be its Trojan horse in the European Union when the time comes.