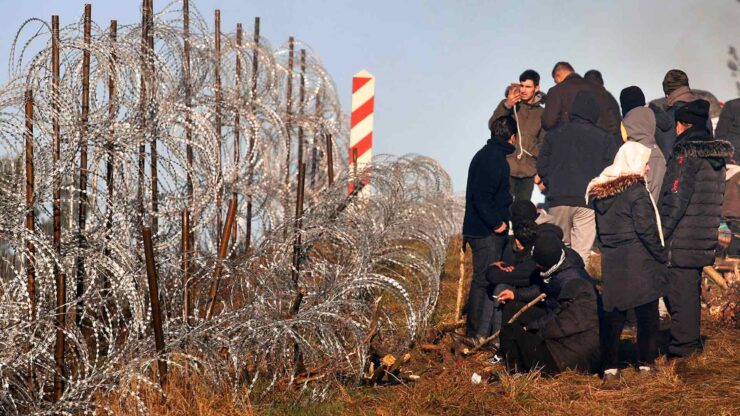 Over the past few months, the situation on the Polish-Belarusian border has remained tense due to the accumulation of illegal migrants who are trying to get into the European Union. The culmination of tension came at the beginning of this week, when migrants tried to break through the border from Belarus. Warsaw and Brussels accuse Minsk of deliberately organizing a border crisis, claiming that the Alexander Lukashenko’s regime, in retaliation for the sanctions imposed against him, is organizing the arrival of migrants to Belarus, where they are helped to get to the Polish border, after which the Belarusian security forces assist their attempts to cross it. Also, the Polish authorities have no illusions about who is the main mastermind of all these actions and the fact that he is definitely not in Minsk.

Back on Saturday, November 6, the Belarusian media started reporting that migrants from the Middle East and African countries, who arrive en masse in Minsk, began to gather in large groups in one of the capital’s districts. Later they informed that from Saturday the migrants have been heading along the roads towards the Polish border. It was also reported that they were accompanied by armed Belarusian border guards.

On Monday, November 8, several thousand migrants from Africa and the Middle East came from the Belarusian side to the border with Poland. Some tried to break into Polish territory, destroying barbed wire fences. Videos posted by Polish police showed migrants throwing stones at Polish soldiers. Other videos showed migrants’ attempts to demolish a fence that was installed on the Polish-Belarusian border as a temporary measure. The crowd chanted “Germany! Germany!”, thereby making it clear that the ultimate goal of migrants is not Poland, but Germany.

On the night of Wednesday, November 10, two large groups of migrants managed to enter Polish territory, but in the morning Polish Defense Minister Mariusz Blaszczak claimed that everyone who had illegally entered Poland the night before had been detained.

The reaction of the Polish authorities to the events on the border with Belarus was quite tough: the crisis was artificially provoked by Minsk, but its main ideologist is in Moscow. “This attack which Lukashenko is conducting has its mastermind in Moscow, the mastermind is President Putin,” Prime Minister Mateusz Morawiecki said at an emergency meeting of the Polish parliament on November 9.

Defense Minister Blaszczak is of the same opinion. “Europe’s last dictator” exercises his power thanks to the Kremlin… The Russians use hybrid attacks to undermine the power of the government, and then use the elites of the attacked country. Ultimately, their goal is to create panic and make the attacked country incapable of resistance,” the minister said.

In response to such actions of the Belarusian-Russian tandem, the Polish Sejm called on the European Union to impose new sanctions against Minsk and Moscow, and also considered it necessary to demand new anti-Russian sanctions from Washington.

The European Union, in turn, promised to introduce new sanctions against Belarus and accused the regime of Alexander Lukashenko of using migrants as political pawns and “gangster” behavior that endangers human lives. “This is part of the inhuman and really gangster-style approach of the Lukashenko regime that he is lying to people, he is misusing people… and bringing them to Belarus under the false promise of having easy entry into the EU,” a Commission spokesperson said.

Also NATO has expressed concern at the “escalating” situation on the Polish-Belarusian border and has called on Belarus to respect international law. “We are concerned about the escalation on the Polish-Belarusian border. We call on Belarus to respect international law, ”the NATO headquarters in Brussels stressed. The Alliance also believes that “the use of migrants by the Lukashenko regime as a hybrid tactic is unacceptable.”

The vision of the crisis in Minsk and Moscow is fundamentally different. Official Minsk accuses Poland of inhumane treatment of migrants, stating that Warsaw is obliged, according to international law, to let them cross the border, and then consider applications for asylum. As for the Belarusian security services’ assistance to migrants, the State Border Committee of Belarus, for example, denies any involvement in what is happening and declares that the refugees “themselves organized into such a large group” and that the activities carried out by the Belarusian border guards “are aimed primarily at ensuring security in the area where the group of refugees is located, preventing provocations and crisis situations.”

Moscow, in turn, from the very beginning of the growing tension on the Polish-Belarusian border, on the one hand has been trying in every possible way to demonstrate that it has nothing to do with what the Belarusian authorities are doing, and, on the other hand, has been justifying Minsk’s actions. Thus, Russian Foreign Minister Sergei Lavrov said that the reason for the migration crisis is the West’s policy towards the Middle East. “The legs [of the crisis] “grow” out of the policy that Western states, including NATO and the European Union, have pursued for many years in relation to the Middle East and North Africa, trying to impose on them a “better life” according to Western models,” Lavrov said. “Therefore, the main responsibility for resolving the migrant crisis lies with those who created the conditions for it to break out, he stressed,” he added.

Lavrov also called on the EU to take responsibility for resolving the crisis, and suggested the need to accept refugees and provide financial aid to Belarus.

The first thing that catches the eye in the migration crisis on the Polish-Belarusian border is that these events are not something new, but only a repetition of an already proven scheme. A similar, albeit on a smaller scale, could be observed in summer on the border of Belarus with Lithuania. The scheme of creating chaos on the border with the EU proved to be successful, and now Lukashenko has decided to pull this trick with Poland.

It should also be noted that in fact, the abovementioned scheme is not Lukashenko’s invention, but was successfully tested back in 2015. Then there were refugees from Syria, who, due to the activities of the Assad regime and Russian bombing, broke through the border of neighboring Turkey, and then through the Balkans to Western Europe. It is no coincidence that after the EU migration crisis, which the Kremlin was accused of, relations between Brussels and Moscow improved, and Putin could return to the negotiating table with Western leaders. So this time Lukashenko decided not to reinvent the wheel, but to act according to a proven and effective scheme.

The second thing that can be noted is that Lukashenko would hardly have gone to an open escalation with Europe on his own. It is more than likely – and here we should recall the statements of Polish officials – that the source of the impetus that prompted Lukashenko to take such actions is in Moscow. There are several reasons for this.

On the one hand, Putin, through his de facto proxy Lukashenko, continues to wage a hybrid war against the West. The stake is working: tension is growing not only on the EU border (which is also the NATO border), but also in the Union itself. Disagreements between member countries and in the societies of the countries under attack are growing; Western leaders and their security forces are faced with a choice, which does not have good options.

In addition, with the hands of Lukashenko, Moscow is once again testing the West’s reaction to its hybrid attacks and revealing the weaknesses of its defense and security system, which will later also become the targets of Russian hybrid aggression. At the same time, Moscow, as in the situation with the aggression against Ukraine, makes a helpless gesture and pretends that it has nothing to do with it at all.

Simultaneously, as it has already been seen from the reaction of the Kremlin, the situation on the Polish-Belarusian border is actively used in the Russian information operation against the West. In addition to discrediting the actions of the Polish authorities, accusations that the West is responsible for the migration crisis are being repeatedly made.

In addition, it is quite obvious that another goal of the Lukashenko-Putin tandem is to provoke the Polish military and border guards to use weapons against migrants in order to spread horrific footage of the shooting of “peaceful and unarmed” refugees and accuse the Polish leadership of inhumane actions.

On the other hand, by pushing Lukashenko to aggravate relations with the West, Putin thereby further deepens the problems of his “friend” and further strengthens his control over him, as well as over Belarus. The Kremlin’s tactics here are very simple: first, the considerable problems are created for Lukashenko, and then a solution is proposed. Not gratuitously, of course, but in return for a part of the sovereignty of the Belarusian state. Thus, no matter how Lukashenka wriggles, the Russian stranglehold on his neck is tightening more and more. The same is happening with Russian control over Belarus. The main task of the Kremlin in this game with the Belarusian regime is to maximize the Russian military presence in Belarus and the control over the Belarusian security forces. If it succeeds, then it will no longer matter who is the president of Belarus. It will be important who will be the supreme commander in chief in it. And this supreme commander in chief, will be in the Kremlin.