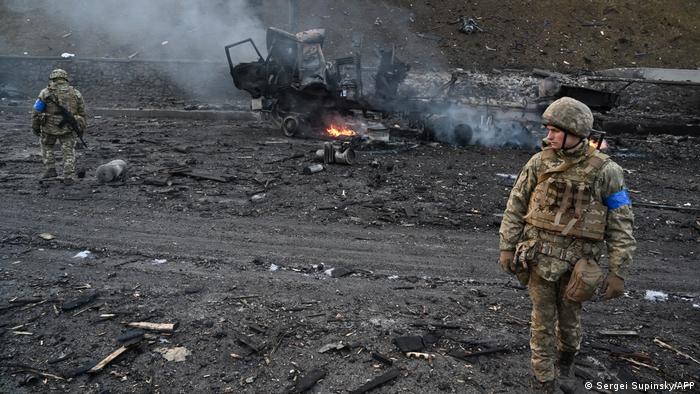 On the contrary, they will provoke a new Russian offensive

Western analysts are trying to develop different scenarios for Russia’s actions in Ukraine. The “menu” is expansive: a protracted conflict with a gradual transition to low-intensity hostilities; a nuclear disaster; the use of chemical or biological weapons to bring victory in land operations; political compromise on the side of Ukraine and others.

The only scenario that is not discussed is the full restoration of Ukraine’s territorial integrity. Everywhere there are some “buts”, as if the need to “sacrifice” something to Russia is considered unavoidable.

It is impossible for Ukraine to accept any of Russia’s ultimatums. Not the recognition of the so-called “republics” within the borders of Luhansk and Donetsk oblasts, not the annexation of Crimea, and not the demilitarisation of Ukraine.

Kyiv understands that these concessions will not bring any security and in no way will they guarantee the withdrawal of Russian troops. Moreover, these “compromises” will not prevent a new Russian attack. To the contrary, they can only provoke a new Russian offensive against Ukraine.

The only issue that can be debated between the west and Ukraine is security guarantees in the form of a treaty, if Ukraine does not join Nato in the near future.. Any agreement would have to include terms about how military support will be provided in the event of a new invasion. This military support should include concrete forms of collective response, including using troops. However, western partners may consider such a guarantee as too risky.

A ceasefire is not enough, as it would only fix the positions of the military where they stand. After that, it would be possible to force the Russians to leave only in exchange for complete political surrender.

Russia would use a ceasefire to strengthen and rearm its troops while demanding the west reduce military assistance to Ukraine. Ukraine’s partners would be much more inclined to a political compromise – read: surrendering part of the interests and even territories of Ukraine. The will of Ukrainians is also too strong to accept this course of action.

Furthermore, any calls for “disarmament” and “demilitarisation” of Ukrainian troops by Russia and/or the west are impossible in a country where the army clearly wins ground operations and strongly rebuffs Russian air forces. Queues at military registration and enlistment offices would not disappear.

The rest of the population is involved in logistical backing of the army. In Kyiv, territorial defence has around 100,000 people with weapons in their hands already. In the occupied cities, thousands of people go out every day to protest against the occupying forces. It is impossible to stop this resistance, no matter how much someone wants it. The horrors of Mariupol should remind us of a new danger to Sarajevo.

Vladimir Putin is not ready to step back, but he cannot win on the ground. This means that Russia will continue to increase terror against the civilian population, and cities will be wiped off the face of the Earth by air and missile attacks. The use of strictly prohibited weapons, namely biological, chemical and even nuclear ones, is becoming more and more probable.

For Ukraine, on the contrary, the strategic goal is the withdrawal of Russian troops from its territory. However, it seems impossible to achieve it diplomatically. Regardless of how uncomfortable the west may be about it, this goal can be achieved only by military means. And the Ukrainian army is absolutely capable of that.

Ukraine must actively push Russian troops to the border. This can be achieved both physically, by Ukraine’s armed forces, and diplomatically and economically, with the support of sanctions and isolation launched by our western partners.

We urgently need weapons, including air defence systems and antimissile systems. We need sanctions, especially the refusal of EU states to purchase Russian gas and oil, and the disconnection of all Russian banks from Swift. We need western support for the independence of all of Ukraine.

… We have a small favour to ask. Millions are turning to the Guardian for open, independent, quality news every day, and readers in 180 countries around the world now support us financially.

We believe everyone deserves access to information that’s grounded in science and truth, and analysis rooted in authority and integrity. That’s why we made a different choice: to keep our reporting open for all readers, regardless of where they live or what they can afford to pay. This means more people can be better informed, united, and inspired to take meaningful action.

In these perilous times, a truth-seeking global news organisation like the Guardian is essential. We have no shareholders or billionaire owner, meaning our journalism is free from commercial and political influence – this makes us different. When it’s never been more important, our independence allows us to fearlessly investigate, challenge and expose those in power.

Article was published in The Guardian