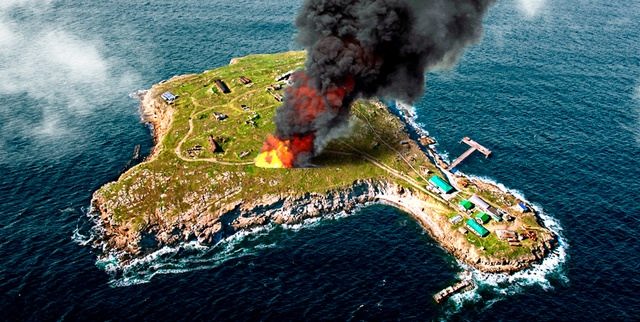 Yesterday, Russian troops “as a gesture of goodwill” left Serpent Island. And this is not the first case of such military nobility on their part. By the same goodwill, the Russian armed forces had previously abandoned Kyiv and other regions in northern Ukraine, sunk the “Moskva” cruiser, and got rid of more than 35,000 soldiers, officers, and a dozen generals. Well, it’s just some kind of a goodwill army.

As we all know, the Russian “special military operation” in Ukraine, which has been going on for more than four months, is proceeding strictly according to plan. Russian President Vladimir Putin once again reminded this yesterday. “We are working calmly, the troops are moving, reaching the lines that have been set as tasks. Everything is going according to plan,” he told reporters during his participation in the Caspian summit in Ashgabat.

And, as if to confirm the words of their president, yesterday Russian troops hastily and according to the plan, left the Ukrainian Black Sea Serpent island, which they had occupied until recently. “Today, as a step of goodwill, the Russian military completed their tasks on Serpent Island and withdrew the garrison stationed there,” General Konashenkov, the spokesman for the Russian Defense Ministry, said. He also noted that in this way the Russian side demonstrated to the world community that the Russian Federation does not interfere with the efforts of the U.N. to organize a humanitarian corridor for the export of agricultural products from the territory of Ukraine.

As often happens with official reports by representatives of the Russian authorities, they often keep silent about small but important details in them. So this time, Konashenkov, for some reason, forgot to clarify what exactly preceded the demonstration of the “gesture of goodwill” by the Russian occupation garrison stationed on Serpent Island. And this demonstration was preceded by a planned operation of the Ukrainian military command to liberate the island from Russian troops. As early as June 21, the Russian Ministry of Defense stated that the day before Ukrainian Armed Forces “tried to inflict massive air and artillery strikes on Serpent Island, followed by assault landing.” At the same time, they noted that “none of the Ukrainian fire weapons reached the target on the island.” Although the Ukrainian military then said that Serpent Island was attacked using various forces and methods of destruction and that the island garrison of the Russian army suffered significant losses.

Later, on June 27, the Ukrainian military announced that they had carried out more than ten precision strikes on Serpent Island, which, in particular, hit another Russian Pantsir-S1 system. “We continue the operation on Serpent Island. This night, more than 10 accurate hits were inflicted on the island, we are reconnoitering the results, but there is already the first report about the destruction of another Pantsir-S1 surface-to-air missile and  and anti-aircraft artillery system, – then the press center of the operational command “South” of the Armed Forces of Ukraine reported. They also clarified that the military operation is designed for a long time and the absolute liberation of the island from the Russian military.

That is, it turns out that the “goodwill gesture” as a result of which the Russian military lost air control over the Black Sea waters near the coast of the Odesa region, was, in fact, a little “push” by their Ukrainian “counterparts”. According to the Commander-in-Chief of the Armed Forces of Ukraine Valerii Zaluzhnyi, the Ukrainian self-propelled howitzers “Bogdana” played an important role in this “push”.

By the way, this is far from the first demonstration of a “goodwill gesture” by the Russian troops during the war against Ukraine. As it was, for example, in April near Kyiv, when the units of the Russian army were battered enough by the actions of the defense forces of the Ukrainian capital and were under a real threat of destruction. To save them, and at the same time to avoid great shame, the Russian command decided to remove them from there as soon as possible. For the same reasons, similar gestures of goodwill were shown by the Russian army in the Chernihiv and Sumy regions. As in the case of Serpent Island, the Kremlin then said that it was “a gesture of goodwill to improve the atmosphere and the situation at the negotiations with the Ukrainian delegation in Istanbul.”

Surely as a gesture of goodwill and exactly according to previously approved plans, the Russians flooded the pride of their Black Sea Fleet, the “Moskva” cruiser, which was worth $ 750 million and on which there were 510 crew members (the fate of most of which is still unknown).

Definitely, by goodwill and according to the plan of their state and military leadership, the Russian military has already left thousands of armored vehicles, aircraft, helicopters, air defense systems, electronic warfare, ships, cars, and other valuable military equipment in Ukraine. As well as more than 35 thousand soldiers and officers and a dozen generals. And there is every reason to believe that this is far from the limit for them. This in turn suggests that the Russian army in Ukraine is gradually turning from the “second army of the world” into a real goodwill army. And the Ukrainian armed forces, together with the received Western weapons, kindly help it in this.