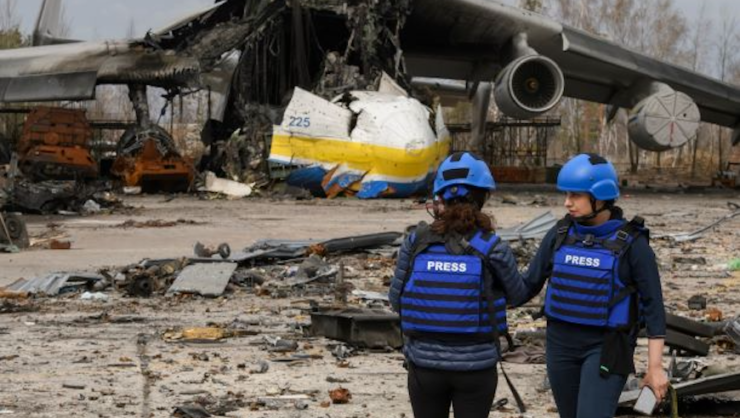 War in Ukraine and EJ Concernes

The terrible war in Ukraine, sparked from the invasion of the country by Putin’s Russia, is experiencing growing worries all over Europe and beyond. Countries cannot change borders by force.

In addition to the brutal killing of innocent civilians, we are facing a very dangerous situation that can undermine democracy and stability in our continent as a whole, values which were put at the basis of the European integration progress by our courageous and farsighted founding fathers and which are strongly enshrined in the treaties of our European Union.

EJ needs to firmly stick to them. We express our deepest solidarity and feel close to the Ukrainian people who is suffering so much. EJ expresses a particularly strong support for all journalists and other media people who risk their lives every day to report about this terrible war. We feel united with all our colleagues around the world in a network of solidarity and commitment in order to disseminate unbiased information about what is happening.

EJ journalists are stressing the need in all media outlets for a greater emphasis on accuracy, fairness and integrity in our profession. The war went viral on the internet and fake news and misleading information are in abundance. EJ journalists reaffirm the need to keep the ethical values of journalism, to ensure a free exchange of information that is accurate, fair and thorough among journalists from all over the world, no matter of their country of origin.

Reporting from war zones makes journalism a dangerous profession and, as this year proves, for many, a deadly one. We express our strong support for the new resolution on the safety of journalists adopted by consensus at the UN Human Rights Council at the beginning of October this year, signaling strong international commitment to end all attacks, reprisals and violence against journalists worldwide. In total, in the world, in the first 8 months of this year, 44 journalists and 4 media workers were killed. 502 journalists and 21 media workers from all around the world are currently in prisons (Info: Article 19 – this is an international human rights organization that works to defend and promote freedom of expression and freedom of information worldwide).

As we learned from reports of Ukrainian journalists, at least 20 journalists have been killed in the war, so far (Info: National Union of Journalists of Ukraine). Since Jan 1st of this year, 8 journalists (6 men and 2 women) were killed in Ukraine (Info: Reporters Without Borders).

The stakes of the conflict in Ukraine are clear to all. The consequences are affecting people all around the world. In this context, EJ remarks with great concern that this war has put EU citizens in large-scale financial difficulties with rising prices for energy and a decrease in living standards.

A “Wave of poverty” is expected to hit EU citizens this winter and, in this context, EJ journalists are demanding better coordinated actions in support of Ukrainian population as well as concrete steps for protecting EU citizens and companies from getting into a major economic crisis.

EJ and its international partners are united in condemning Putin’s aggression on Ukraine and all systems of power that denies freedom of speech and democratic values. “Pathological” ideologies and autocratic regimes seek consolidation while newer ones start spreading again. Journalists from these troubled countries are among the first who suffer repressions, lose their jobs, are thrown in jails or are outcast.

EJ urges all democratic institutions to commit into allocation of resources and political will to prevent, protect and remedy all violations against journalists and media people working with them.

EJ journalists reaffirm their freedom to analyze and critique systems of power to help ordinary people to have access to correct, verified and unbiased information.

Let’us hope that the parts directly involved and the international community – respecting the right of the Ukrainian people to live in their free and democratic country – will find athe way to end catastrophic war.