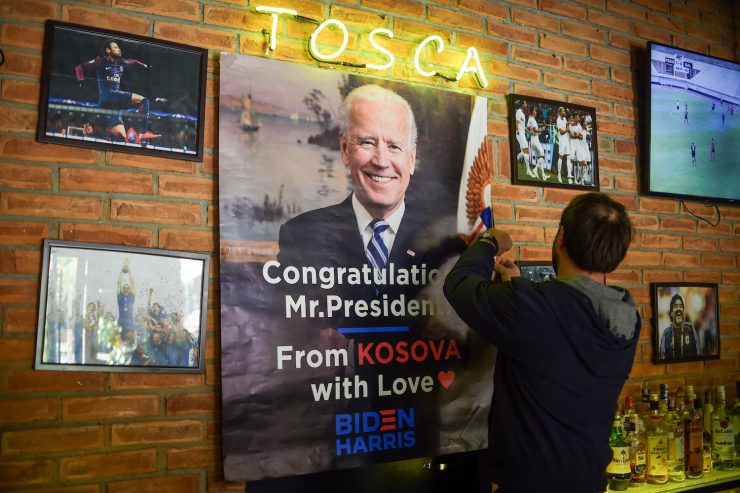 With experience of two full mandates as Vice President and three decades in Senate Foreign Relations Committee behind him, President Joe Biden is ready for start. Although his priorities are home issues, such as pandemic and economy, he assembled the inner circle of experienced foreign policy veterans, most of them from Barack Obama’s administration.

President Biden share strong beliefs in NATO, trans-Atlantic alliance and multilateralism. While he still searches how to reduce tensions in an unprecedented US-China crisis and formulating policy toward Russia that will block Moscow’s meddling in regional affairs, it is almost certain there will be a recalibration of policy over Iran, North Korea, the Middle East or Turkey.

And what about the Western Balkans and its unfinished business? Biden is no stranger to the region he started regularly visiting from early 1990s. He met political, religious, and community leaders and developed long-standing personal relations with many of them.

Donald Trump favored quick solutions and foreign policy fixes as an opportunity to promote his office and grab headlines. Biden diplomacy and objectives are likely designed with a long-term focus. As a veteran of troubled area, Biden’s Western Balkans approach – when it comes to the table – can be defined in three words once said by former US ambassador to Belgrade Cameron Munter: careful, steady and predictable.

While the Western Balkans may not top the new US administration’s agenda, Washington can nevertheless play a major role trying to build a common security zone in the cooperation with the European Union and NATO. The long-term game would be to help the countries modernize their economies and their energy and climate policies, and to improve their democracies with an emphasis on greater collaboration with the EU.

The new administration has clear-cut attitudes about the Western Balkans. From Washington’s perspective, region’s political instability represents threat to American interests. Abandoning the region by the US and the EU would create favorable conditions for China and Russia to expand their spheres of influence.

The new White House tenant will not repeat the mistake from Obama’s period when the US were disengaged from the region and gave it over to the EU. On the contrary, it could be said that the Western Balkans offers Americans a great opportunity. In tandem with the Europeans, Germany especially, a re-energized US policy could be transformative and could help resolving regional conflicts and build collapsed democracies.

President Biden’s long history of  involvement in the Western Balkans brings him admire on one side and suspicion on other. To Bosniaks and Kosovo Albanians he is a hero because of his strong support for NATO bombardments of Serbian forces at the time of Balkan wars. The United States still keeps around 7,000 soldiers in Kosovo’s Camp Bondsteel under the KFOR command. To Serbs, he is “Serb-hater”, although he is the first high-ranking US official to have expressed condolences to victims of NATO military campaign in 1999.

There is no doubt that Biden’s approach toward the Kosovo problem is based on formula of mutual recognition of two independent states – Kosovo and Serbia. At the same time, the EU have a chance to get out of idealess lethargy and to lead the Brussels dialogue between Belgrade and Pristina. The EU special envoy for Kosovo, experienced Slovak diplomat Miroslav Lajcak, will have the opportunity to speak for Trans-Atlantic community as a whole.

Recent Kosovo elections opened way toward a peaceful transition of power in Pristina, but question remains if new leader Albin Kurti wants to reach an agreement with Serbia. As for now, he is against any dialogue because Kosovo is “finished business.” No negotiations. Serbia has to recognize Republic of Kosovo.

The same hard stance applies to Belgrade. Serbia President Aleksandar Vucic is vehemently opposing recognition of independent Kosovo. Belgrade will “never” accept sovereignty of “false state”, claims the President while repeating he is ready for dialogue and compromise.

Officials in Belgrade were openly for Donald Trump during the pre elections campaign. President Vucic is one of those who would have preferred a different outcome and was counting on a continuation of the laissez-faire foreign policy strategy for which the previous administration had become known.

One can ask why there is no substantial difference in approach of two administrations toward Kosovo issue, then. Both of them strongly defend Kosovo independence. The only difference is that Trump was ready to hear what Belgrade have to say. The point is that Belgrade was always complaining about US “finished business” approach towards Kosovo. Based on such approach, Washington before Trump was not ready to hear Serbia’s arguments. But Trump proved to listen what Vucic have to say. At least he pretended to listen. But for Vucic that was enough. So, if Biden now accepts “conversation argument” and use wealth of his foreign policy experience, along with powerful diplomacy and negotiations skills, it would be easier for him to solve the Kosovo problem. For the time being, Belgrade accepts wait-and-see approach…