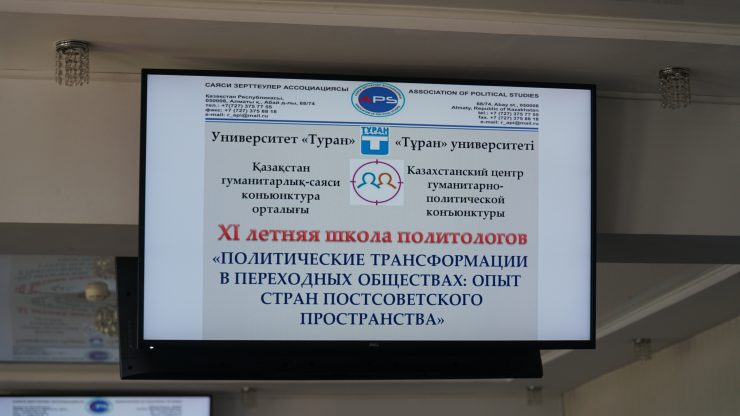 The head of the Asian section of NGRN Yuri Poyta took part in the XI International Summer School of Political Scientists, Almaty on the topic “Political transformations in transitional societies: the experience of post-Soviet countries.”

He gave a lecture on “Problems of the National Identity of Ukrainians in the Context of National Security and State Building”.

During the lecture, he considered the factors that made possible a hybrid aggression of Russia against Ukraine in Crimea and in Donetsk and Luhansk regions.

He named the historical, cultural problems of the national identity of Ukrainians in dynamics, and by regions of Ukraine, as well as the peculiarities of the language and information policy of Ukraine and Russia.

For example, in 2013, 81% of respondents considered themselves patriots of their country, and only 61% would vote for its independence. Therefore, patriotism and support for independence in Ukraine were not identical. And only 46% of the respondents were ready, in the event of a threat, to defend the territorial integrity of Ukraine with arms in hand.

After the events of 2014, Russian media were banned in Ukraine, and measures were also taken to significantly increase Ukrainian-language content in media, television, books, etc.
As a result of this, changes are currently being observed, as evidenced by the results of studies and opinion polls.

In particular, as of 2019, independence would be supported not by 61%, as in 2013, but by 82%, which corresponds to the number of those who consider themselves a patriot of their country.

Also, the percentage of those who identify themselves primarily as a citizen of Ukraine (and not as a resident of a certain region) has grown. In 2010, there were 57% of those who could call themselves that, in 2019 – 65%.

“Citizen of Ukraine”, as an identifier, is currently dominant in all regions of Ukraine, while in the West there are the most such respondents – 72%, in the Center they chose this alternative – 66%, in the South – 62%, in the East – 51%.

In 2008, citizens of Ukraine primarily associated themselves with their place of residence, that is, local (local) identity prevailed, attachment to a specific place of residence (41% of respondents), and only a third (32%) showed an all-Ukrainian identity.

Also, there is a difference between the regions on the issue of the Soviet past. The association with the “Soviet man” is more characteristic of residents of the southern and eastern macroregions, as well as older people and the poor.